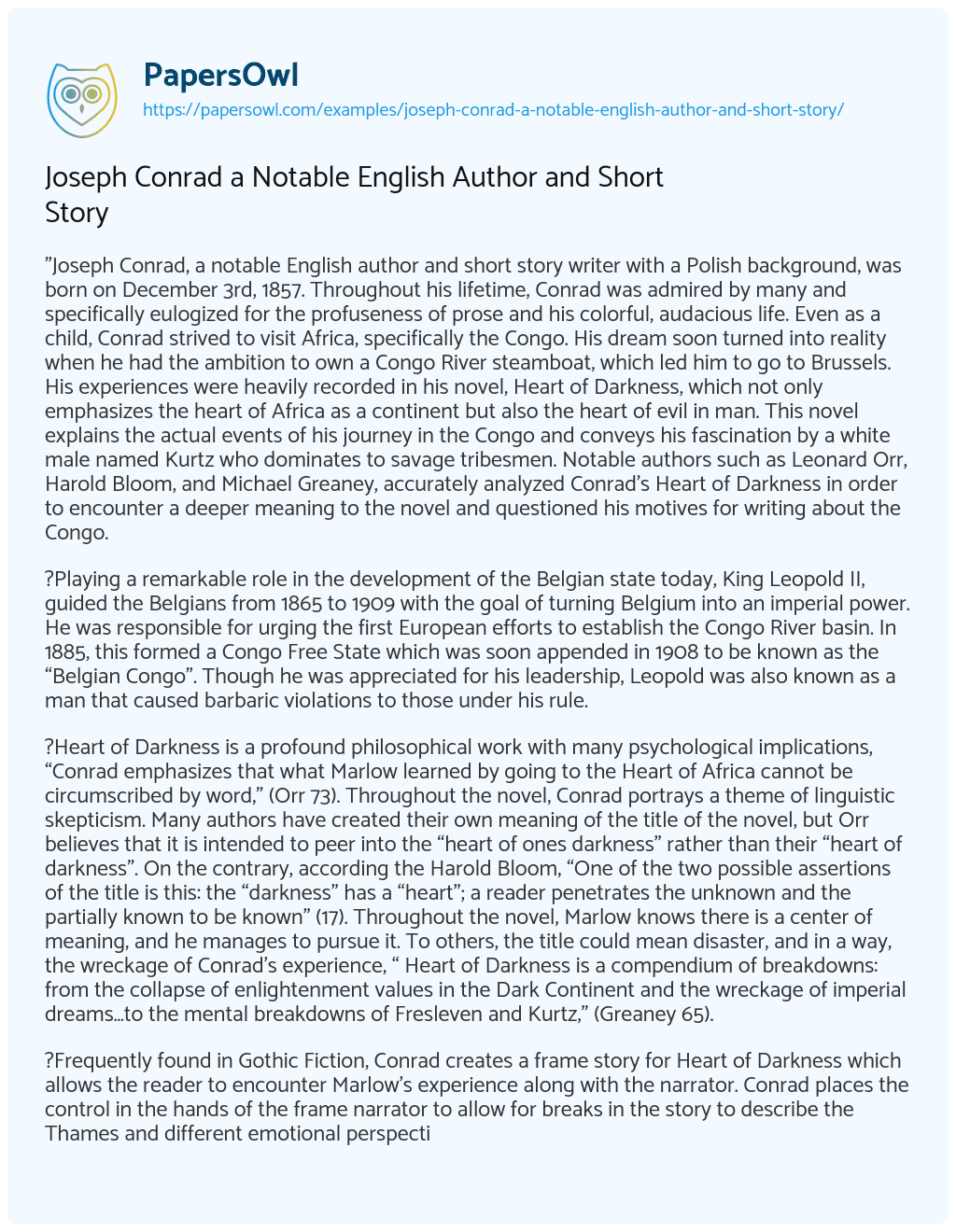 “Joseph Conrad, a notable English author and short story writer with a Polish background, was born on December 3rd, 1857. Throughout his lifetime, Conrad was admired by many and specifically eulogized for the profuseness of prose and his colorful, audacious life. Even as a child, Conrad strived to visit Africa, specifically the Congo. His dream soon turned into reality when he had the ambition to own a Congo River steamboat, which led him to go to Brussels. His experiences were heavily recorded in his novel, Heart of Darkness, which not only emphasizes the heart of Africa as a continent but also the heart of evil in man. This novel explains the actual events of his journey in the Congo and conveys his fascination by a white male named Kurtz who dominates to savage tribesmen. Notable authors such as Leonard Orr, Harold Bloom, and Michael Greaney, accurately analyzed Conrad’s Heart of Darkness in order to encounter a deeper meaning to the novel and questioned his motives for writing about the Congo.

?Playing a remarkable role in the development of the Belgian state today, King Leopold II, guided the Belgians from 1865 to 1909 with the goal of turning Belgium into an imperial power. He was responsible for urging the first European efforts to establish the Congo River basin. In 1885, this formed a Congo Free State which was soon appended in 1908 to be known as the “Belgian Congo”. Though he was appreciated for his leadership, Leopold was also known as a man that caused barbaric violations to those under his rule.

?Heart of Darkness is a profound philosophical work with many psychological implications, “Conrad emphasizes that what Marlow learned by going to the Heart of Africa cannot be circumscribed by word,” (Orr 73). Throughout the novel, Conrad portrays a theme of linguistic skepticism. Many authors have created their own meaning of the title of the novel, but Orr believes that it is intended to peer into the “heart of ones darkness” rather than their “heart of darkness”. On the contrary, according the Harold Bloom, “One of the two possible assertions of the title is this: the “darkness” has a “heart”; a reader penetrates the unknown and the partially known to be known” (17). Throughout the novel, Marlow knows there is a center of meaning, and he manages to pursue it. To others, the title could mean disaster, and in a way, the wreckage of Conrad’s experience, “ Heart of Darkness is a compendium of breakdowns: from the collapse of enlightenment values in the Dark Continent and the wreckage of imperial dreams…to the mental breakdowns of Fresleven and Kurtz,” (Greaney 65).

?Frequently found in Gothic Fiction, Conrad creates a frame story for Heart of Darkness which allows the reader to encounter Marlow’s experience along with the narrator. Conrad places the control in the hands of the frame narrator to allow for breaks in the story to describe the Thames and different emotional perspectives. According to Michael Greaney, “ Marlow is credited by the frame narrator with a rare observational subtlety…” (65). Marlow’s story can be looked at as an abortive quest to “escape from breakdown” in society. Marlow can be considered as the story teller, “If we consider how each of the inner frames opens and closes we realize that in a traditional patterning we should have a structure in which the first narrator presents Marlow as the second narrator…”, (Bloom 121). With this in mind, it can be concluded that Kurtz acts as a third narrator. Marlow frame Kurtz as he finishes his tale and the first narrator can be concluded as the outer frame.

?Conrad includes distinct symbols in his novel to bring a deeper meaning. Some may include the white sepulchral city that symbolizes the European civilization as a whole. Europeans used the white outside to justify colonization while the sepulcher hid the hypocrisy. According to Leonard Orr, “Conrad deals with the colonization and exploitation of Africa” throughout the novel and affirms that he one loses “customary civilized securities, individuals must trust in their innate strength and capacity for faithfulness to survive,” (71). Another significant symbol is the meanings of “The Horror! The Horror!”. Bloom believes that it is a response to a private nightmare, “Marlow insists that they are quite the reverse: a moment of complete knowledge” and also asserts that not only does it have to do with Kurtz horrific history, but also with the world as a whole (18). This saying admits of no rejoinder, “it is a definitively monologic utterance,” (Greaney 74). Marlow ends up comparing his own recollections of his crisis with his imagined deathbed which was granted to Kurtz.