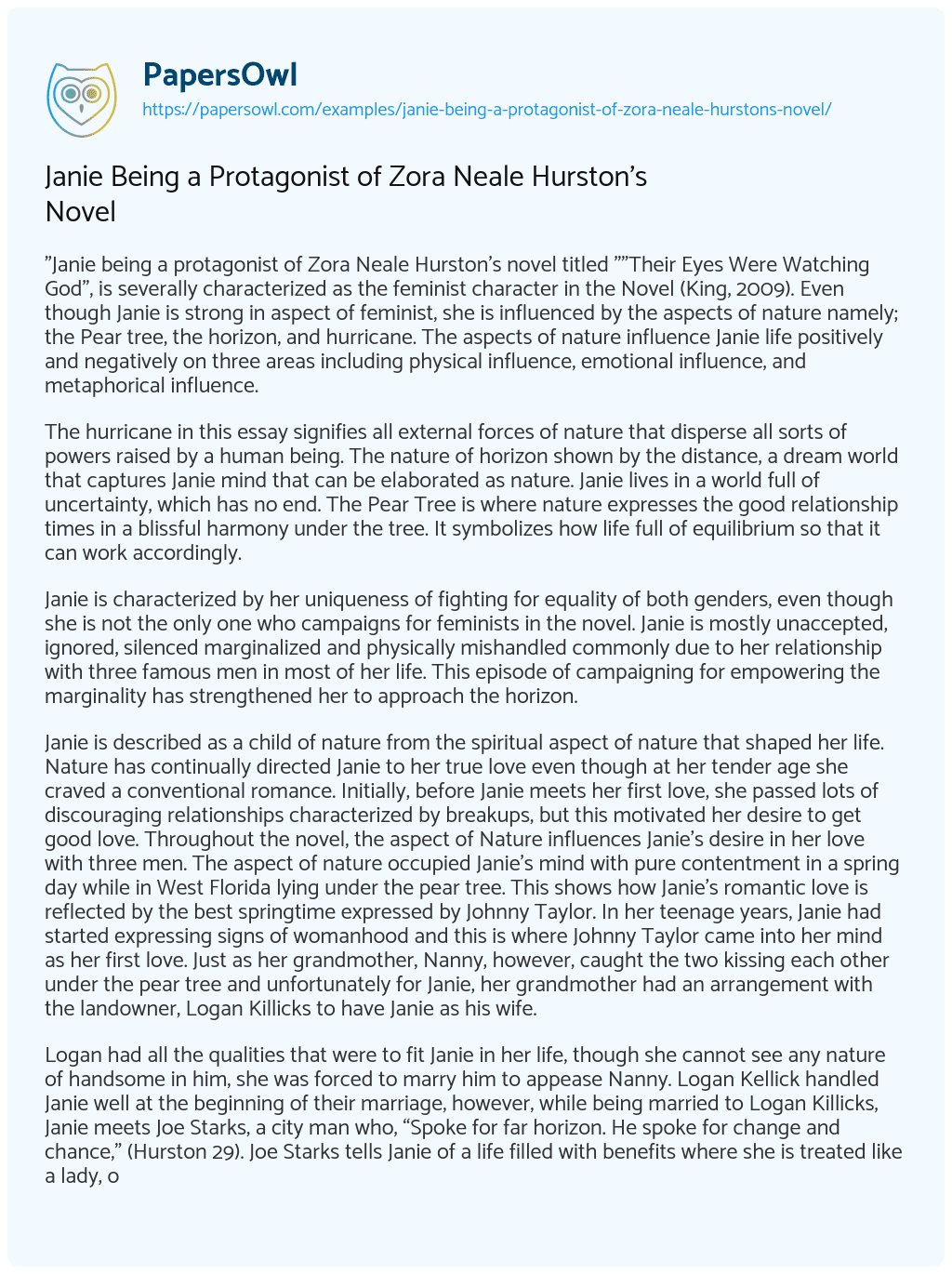 “Janie being a protagonist of Zora Neale Hurston’s novel titled “”Their Eyes Were Watching God”, is severally characterized as the feminist character in the Novel (King, 2009). Even though Janie is strong in aspect of feminist, she is influenced by the aspects of nature namely; the Pear tree, the horizon, and hurricane. The aspects of nature influence Janie life positively and negatively on three areas including physical influence, emotional influence, and metaphorical influence.

The hurricane in this essay signifies all external forces of nature that disperse all sorts of powers raised by a human being. The nature of horizon shown by the distance, a dream world that captures Janie mind that can be elaborated as nature. Janie lives in a world full of uncertainty, which has no end. The Pear Tree is where nature expresses the good relationship times in a blissful harmony under the tree. It symbolizes how life full of equilibrium so that it can work accordingly.

Janie is characterized by her uniqueness of fighting for equality of both genders, even though she is not the only one who campaigns for feminists in the novel. Janie is mostly unaccepted, ignored, silenced marginalized and physically mishandled commonly due to her relationship with three famous men in most of her life. This episode of campaigning for empowering the marginality has strengthened her to approach the horizon.

Janie is described as a child of nature from the spiritual aspect of nature that shaped her life. Nature has continually directed Janie to her true love even though at her tender age she craved a conventional romance. Initially, before Janie meets her first love, she passed lots of discouraging relationships characterized by breakups, but this motivated her desire to get good love. Throughout the novel, the aspect of Nature influences Janie’s desire in her love with three men. The aspect of nature occupied Janie’s mind with pure contentment in a spring day while in West Florida lying under the pear tree. This shows how Janie’s romantic love is reflected by the best springtime expressed by Johnny Taylor. In her teenage years, Janie had started expressing signs of womanhood and this is where Johnny Taylor came into her mind as her first love. Just as her grandmother, Nanny, however, caught the two kissing each other under the pear tree and unfortunately for Janie, her grandmother had an arrangement with the landowner, Logan Killicks to have Janie as his wife.

Logan had all the qualities that were to fit Janie in her life, though she cannot see any nature of handsome in him, she was forced to marry him to appease Nanny. Logan Kellick handled Janie well at the beginning of their marriage, however, while being married to Logan Killicks, Janie meets Joe Starks, a city man who, “Spoke for far horizon. He spoke for change and chance,” (Hurston 29). Joe Starks tells Janie of a life filled with benefits where she is treated like a lady, one not allowed to be participating in any heavy lifting and other strenuous activities Logan expects of her.

Janie made her marriage to be more romantic and she wished to have some natural attraction. Janie is later convinced that she would never love her husband Logan while her “first dream was dead and hence she became a woman” (Hurston 25). Joe ambition captured Janie mind reminding her of her teenage life when she was carefree and independent nature.

Joe planned to establish strong campaigns for equality in the city across all races black and white. The anxiety of romance vision in her love and thirst of adventure started growing up in her mind due to their strong relationship. Janie decided not to risk her marriage and instead relate with Joe when Logan returns. The aspect of horizon felt in the air shows hope for Janie dream to have the best true love. Jamie wished to have ample time full of flower dust and springtime all over her life even though she realized that her childlike wishes never reflected the love she craved (32). Joe became important to her life and she felt safe and proud to have him in her life, unlike Logan. The newly married couple were disappointed to meet themselves in an undeveloped city. Her love worked hard to ensure is at standstill by establishing the town first stores, post office and Stark who was the acting Mayor who together with the property owner, postmaster and storeowner used most responsibility to bring their marriage at par later gave putting lamppost that could sustain for long. The town Mayor encourages Janie to preserve her high status which contrasted her free encouragement nature in order to maintain his position in the town community. Janie is distress that the administrative relation would affect their marriage negatively. This fear increased particularly when Joe his love started to be taken away by his work. The Nature of Bureaucratic relation would probably ruin their marriage, and this makes her feel distressed. The hurricane power of nature came in their peaceful relationship to disrupt them.

Joes discourage Jane’s wish of becoming one of the communities in the town though he still provides for her she might feel lonely. Joe rates her as an average thinker who cannot decide for herself independently. Joe then started to resist Joe’s orders and having independent nature for herself even though Joes actively discourages those efforts. The competition of the two continued but finally, Janie gives in and tends to surrender her efforts. She later found that Joe rating has continuously declined, and she thinks that Joe was not the man of her desire anymore. After Janie life of fear and weary things, Joe became sick. She felt pity for him and went to him blaming him for his continues distortion of her own freedom”

Janie Being a Protagonist of Zora Neale Hurston’s Novel. (2021, May 10). Retrieved from https://papersowl.com/examples/janie-being-a-protagonist-of-zora-neale-hurstons-novel/