Impact of IBM PC and Apple 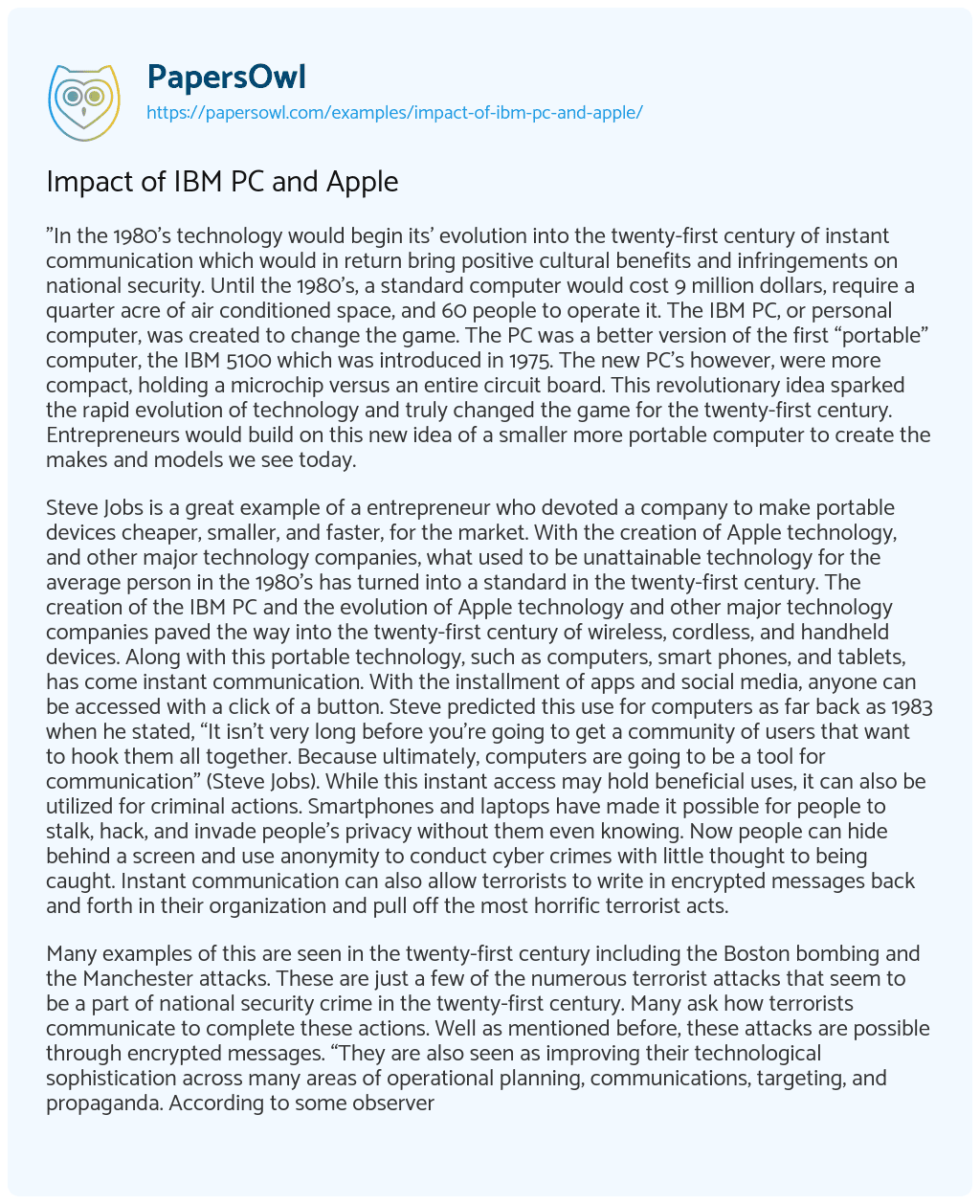 “In the 1980’s technology would begin its’ evolution into the twenty-first century of instant communication which would in return bring positive cultural benefits and infringements on national security. Until the 1980’s, a standard computer would cost 9 million dollars, require a quarter acre of air conditioned space, and 60 people to operate it. The IBM PC, or personal computer, was created to change the game. The PC was a better version of the first “portable” computer, the IBM 5100 which was introduced in 1975. The new PC’s however, were more compact, holding a microchip versus an entire circuit board. This revolutionary idea sparked the rapid evolution of technology and truly changed the game for the twenty-first century. Entrepreneurs would build on this new idea of a smaller more portable computer to create the makes and models we see today.

Steve Jobs is a great example of a entrepreneur who devoted a company to make portable devices cheaper, smaller, and faster, for the market. With the creation of Apple technology, and other major technology companies, what used to be unattainable technology for the average person in the 1980’s has turned into a standard in the twenty-first century. The creation of the IBM PC and the evolution of Apple technology and other major technology companies paved the way into the twenty-first century of wireless, cordless, and handheld devices. Along with this portable technology, such as computers, smart phones, and tablets, has come instant communication. With the installment of apps and social media, anyone can be accessed with a click of a button. Steve predicted this use for computers as far back as 1983 when he stated, “It isn’t very long before you’re going to get a community of users that want to hook them all together. Because ultimately, computers are going to be a tool for communication” (Steve Jobs). While this instant access may hold beneficial uses, it can also be utilized for criminal actions. Smartphones and laptops have made it possible for people to stalk, hack, and invade people’s privacy without them even knowing. Now people can hide behind a screen and use anonymity to conduct cyber crimes with little thought to being caught. Instant communication can also allow terrorists to write in encrypted messages back and forth in their organization and pull off the most horrific terrorist acts.

Many examples of this are seen in the twenty-first century including the Boston bombing and the Manchester attacks. These are just a few of the numerous terrorist attacks that seem to be a part of national security crime in the twenty-first century. Many ask how terrorists communicate to complete these actions. Well as mentioned before, these attacks are possible through encrypted messages. “They are also seen as improving their technological sophistication across many areas of operational planning, communications, targeting, and propaganda. According to some observers, terrorism has become a “web directed” phenomenon” (Perl 5) Terrorist are found using common social media and communication apps such as Twitter, Facebook, Kik, and Telegram to send underlying encrypted messages to each other. These messages often go undetected in an area of crime that has had law enforcement and government officials scrambling to catch up. America is trying to put a stop to this, but can only do so much because the internet is so far reaching. If America were to tighten security on the internet in the U.S., it would still be impossible to secure the rest of the world from the use of the internet. If America were to try and install a backdoor into a encryption mechanism for companies, it could lead to further use of the backdoor by not only law enforcement, but also criminal organizations. The internet is a byproduct of portable devices which has lead to many complications in maintaining security. The vastness of the internet makes security close to impossible when trying to detect terrorist activities.

The creation of the IBM PC and Apple technologies have foreshadowed major terrorist events in the twenty-first century. Steve Jobs and Charles Ranlett Flint, founder of IBM, started their companies with the envision of instant communication in a wireless, cordless, and hand held device. Little did they know, they would revolutionize technology for the better and worse. Because technology has dominated the world market, it has created such a vastness of data that is too hard to keep secure. This leads to criminal actions that have also dominated the twenty-first century. Along with this bad has come good. Portable technology that was once unattainable, has become the norm. The creation of computers, smartphones, and tablets have brought rapid advancement in communication but in the process have left many vulnerable to major events involving terrorism and criminal activity affecting national security around the world.”

Impact of IBM PC and Apple. (2020, Aug 23). Retrieved from https://papersowl.com/examples/impact-of-ibm-pc-and-apple/