Impact of Brown V. Board of Education 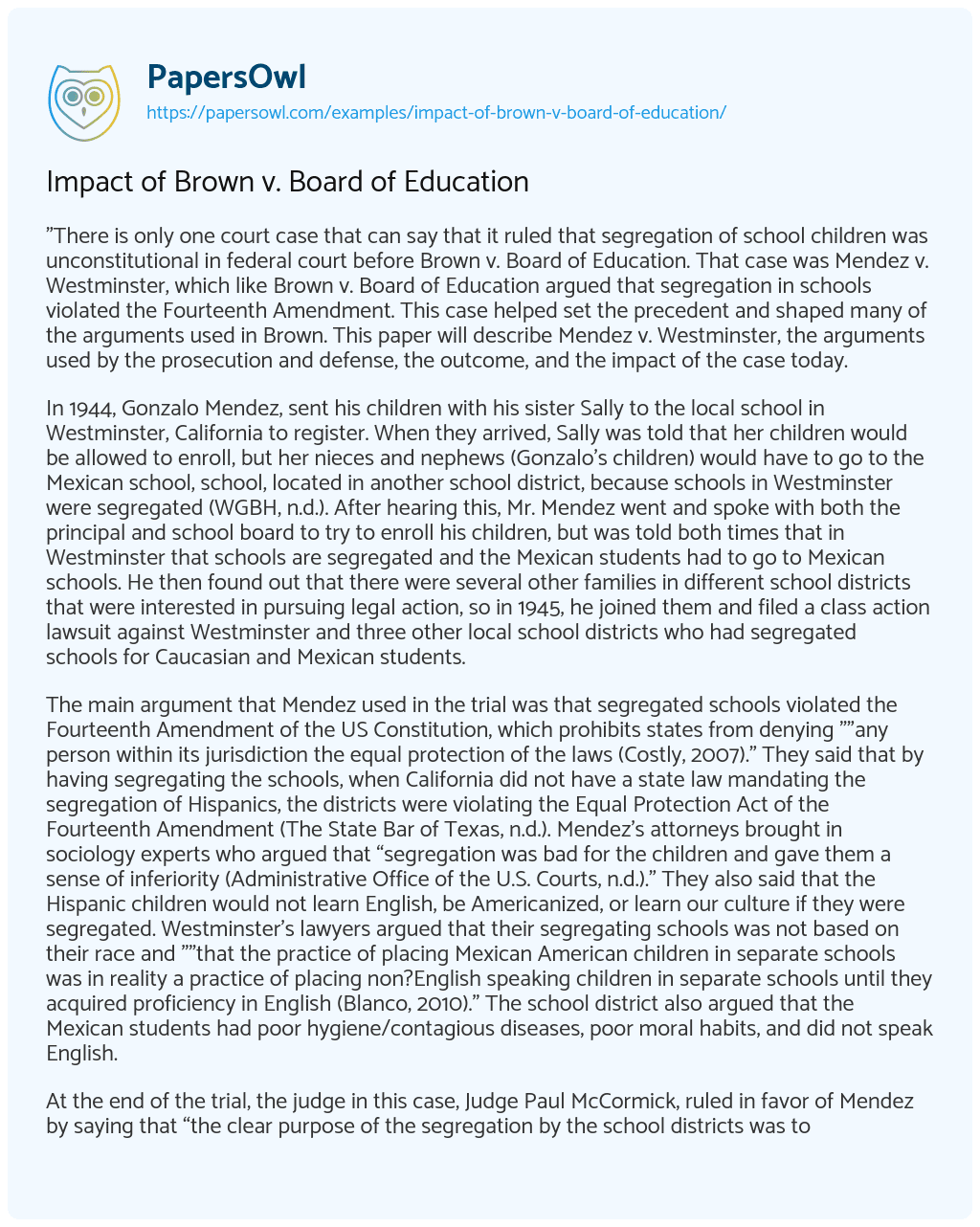 “There is only one court case that can say that it ruled that segregation of school children was unconstitutional in federal court before Brown v. Board of Education. That case was Mendez v. Westminster, which like Brown v. Board of Education argued that segregation in schools violated the Fourteenth Amendment. This case helped set the precedent and shaped many of the arguments used in Brown. This paper will describe Mendez v. Westminster, the arguments used by the prosecution and defense, the outcome, and the impact of the case today.

In 1944, Gonzalo Mendez, sent his children with his sister Sally to the local school in Westminster, California to register. When they arrived, Sally was told that her children would be allowed to enroll, but her nieces and nephews (Gonzalo’s children) would have to go to the Mexican school, school, located in another school district, because schools in Westminster were segregated (WGBH, n.d.). After hearing this, Mr. Mendez went and spoke with both the principal and school board to try to enroll his children, but was told both times that in Westminster that schools are segregated and the Mexican students had to go to Mexican schools. He then found out that there were several other families in different school districts that were interested in pursuing legal action, so in 1945, he joined them and filed a class action lawsuit against Westminster and three other local school districts who had segregated schools for Caucasian and Mexican students.

The main argument that Mendez used in the trial was that segregated schools violated the Fourteenth Amendment of the US Constitution, which prohibits states from denying “”any person within its jurisdiction the equal protection of the laws (Costly, 2007).” They said that by having segregating the schools, when California did not have a state law mandating the segregation of Hispanics, the districts were violating the Equal Protection Act of the Fourteenth Amendment (The State Bar of Texas, n.d.). Mendez’s attorneys brought in sociology experts who argued that “segregation was bad for the children and gave them a sense of inferiority (Administrative Office of the U.S. Courts, n.d.).” They also said that the Hispanic children would not learn English, be Americanized, or learn our culture if they were segregated. Westminster’s lawyers argued that their segregating schools was not based on their race and “”that the practice of placing Mexican American children in separate schools was in reality a practice of placing non?English speaking children in separate schools until they acquired proficiency in English (Blanco, 2010).” The school district also argued that the Mexican students had poor hygiene/contagious diseases, poor moral habits, and did not speak English.

At the end of the trial, the judge in this case, Judge Paul McCormick, ruled in favor of Mendez by saying that “the clear purpose of the segregation by the school districts was to discriminate against pupils of Mexican descent (Blanco, 2010).” He said that only Mexican students were placed in non-English speaking schools and that many of these children spoke English. Judge McCormick went on to say that segregation of Mexican students in public schools was a violation of California state law and was under the Fourteenth Amendment because the students were denied equal protection. The school district appealed this decision and the court upheld Judge McCormick’s decision. As of result of this case, the state of California ended all segregation in its public schools (Administrative Office of the U.S. Courts). One thing that I found interesting about the decision in this case was that Judge McCormick did not ban segregation, he just said that it was a violation of California law because segregation of Mexicans was not allowed by law. California actually had laws in place at this time that allows schools to segregate Asian and Native American students.

Mendez v. Westminster played a big part in the landmark Brown v. Board of Education case because Thurgood Marshall, who helped argue the Brown case, used some of the arguments made in Mendez to argue against segregation of African Americans. This case made a large impact on us today because without it, there may not have been Brown v. Board of Education. Also, if the judge in this case had ruled in favor of the school districts may have continued to be segregated and school resources may not have been equal”

Impact of Brown v. Board of Education. (2021, Mar 27). Retrieved from https://papersowl.com/examples/impact-of-brown-v-board-of-education/