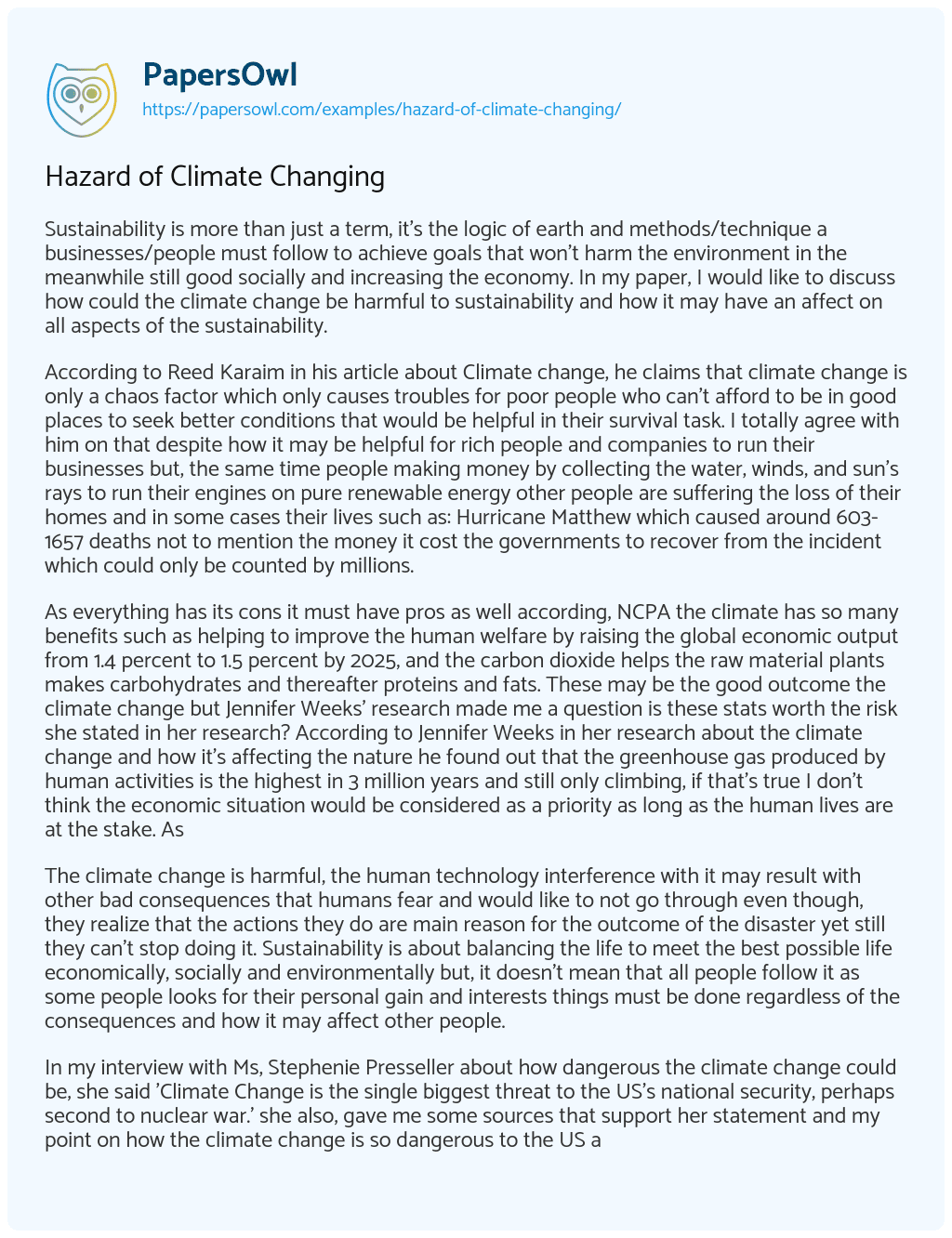 Sustainability is more than just a term, it’s the logic of earth and methods/technique a businesses/people must follow to achieve goals that won’t harm the environment in the meanwhile still good socially and increasing the economy. In my paper, I would like to discuss how could the climate change be harmful to sustainability and how it may have an affect on all aspects of the sustainability.

According to Reed Karaim in his article about Climate change, he claims that climate change is only a chaos factor which only causes troubles for poor people who can’t afford to be in good places to seek better conditions that would be helpful in their survival task. I totally agree with him on that despite how it may be helpful for rich people and companies to run their businesses but, the same time people making money by collecting the water, winds, and sun’s rays to run their engines on pure renewable energy other people are suffering the loss of their homes and in some cases their lives such as: Hurricane Matthew which caused around 603-1657 deaths not to mention the money it cost the governments to recover from the incident which could only be counted by millions.

As everything has its cons it must have pros as well according, NCPA the climate has so many benefits such as helping to improve the human welfare by raising the global economic output from 1.4 percent to 1.5 percent by 2025, and the carbon dioxide helps the raw material plants makes carbohydrates and thereafter proteins and fats. These may be the good outcome the climate change but Jennifer Weeks’ research made me a question is these stats worth the risk she stated in her research? According to Jennifer Weeks in her research about the climate change and how it’s affecting the nature he found out that the greenhouse gas produced by human activities is the highest in 3 million years and still only climbing, if that’s true I don’t think the economic situation would be considered as a priority as long as the human lives are at the stake. As

The climate change is harmful, the human technology interference with it may result with other bad consequences that humans fear and would like to not go through even though, they realize that the actions they do are main reason for the outcome of the disaster yet still they can’t stop doing it. Sustainability is about balancing the life to meet the best possible life economically, socially and environmentally but, it doesn’t mean that all people follow it as some people looks for their personal gain and interests things must be done regardless of the consequences and how it may affect other people.

In my interview with Ms, Stephenie Presseller about how dangerous the climate change could be, she said ‘Climate Change is the single biggest threat to the US’s national security, perhaps second to nuclear war.’ she also, gave me some sources that support her statement and my point on how the climate change is so dangerous to the US and the world as a whole.

The United States is one of the most powerful countries in the world if not the most powerful, being one of the most threatening weapons or causes to it such a big deal and a hard task to be obtained but, what if the thing that the United States afraid of is the thing they can’t defend against? What if it’s somewhat out human’s control? Even though, the climate change sometimes relates to human activities but for the most part, it happens due to natural causes out of human’s controls that cause so many problems for poor people in specific and the government’s altogether.

Since 1980 there have been over 200 climate change disasters which cost around $1.1trillion to the current moment. These enormous numbers would have been so helpful if they were spent on different activities or projects such as: Improve the higher cost of tuition, build more shelters for homeless people, more programs that help improve skills, etc…

On August 23, 2005, until August 31, 2005, North America witnessed one of the deadliest climate change disaster the world has ever known in fact, it was ranked the costliest of the deadliest five hurricanes ever known. The cost of damages was estimated to 108 billion which is roughly four times the damage of Hurricane Andrew resulted back in 1992. Caterina Hurricane began to form on August 23 over the Bahamas from the interaction of a tropical wave and the remnants of tropical depression ten. On its way to Hallandale beach and Aventura before the Hurricane became a Hurricane it was a depression which ran into a tropical storm which only strengthened it into becoming a disastrous natural occurrence that resulted in an unforgettable tragedy that killed many people and left many others without a place they seek its shelter.

In 1992, the United States experienced the most destructive hurricane ever known at that time.the numbers of losses were just unbelievable as it recorded a destruction of 25,000 houses in Miami-Dade county alone and an estimate of 100,000 houses being damaged across the United states although, only 65 people were killed not to mention the numbers of injuries this disaster brought one of the darkest eras that have been witnessed ever to the United States as well as it cost the government about $26 billion in repairing the destruction left behind.

According to ourworldindata in their research on how the natural disaster has infected the world over time, they found out that around 100,000 people died in between 1900-2013 from natural disasters such as Volcano, wildfire, flood, etc… These numbers are just so high and definitely competing with the numbers of deaths resulted from wars, and other human activities if not even exceeding them. Our world in data also, shows the increasing of deaths from natural catastrophes and which disasters were the most to cause deaths. According to their research in 1900s volcanoes resulted in around 4,494 deaths which are the highest to be ever known for the current time by volcanoes. It also shows, Wildfires resulted from 107 deaths in the 1910s which are the highest to be ever recorded in that category. In 1940s Mass movement, wet resulted in 1,753 deaths as its highest to be ever recorded in that category as it was almost putted down by 2010s record which was pretty close but ended up at 1,114. In the 1930s, the world has witnessed the highest number of deaths to be recorded by one type of disaster ‘Floods’ which was recorded at around 436,147 deaths and the highest to be recorded until the current time. Overall, the highest deaths to be recorded in one year resulted due occurrence of natural disaster was 872,627 in the 1920s.

Disasters don’t only result in deaths, sometimes they might not cost lives but may be even worse than that as it may cost so many resources and so much money that may hit the government during a recession or when they have a huge debt which only doubles their troubles. In our world, in data’s research about the results of natural disaster they also gave some statistics on estimates how much the disaster cost the government’s. In 1971-1990 the very high cost(percent of GNI) was 1.0, the high was 1.3, the medium was 3.3, low was 7.6 and all around the world was 1.7. In 1991-2010 the very high was 0.7, the high was 0.7, a medium was 2.1, low was 2.8 and all around the world was 1.0. These stats might be shady but, GNI means it measures the income received by a country both domestically and from overseas which means the lower this GNI is the worse economically a nation is in, that proves how the natural disasters do not only affect the economics by the amount they have to spend on repairing and recovering.

Reasons and Effects of Climate Change