Problems which Affected on Climate Change 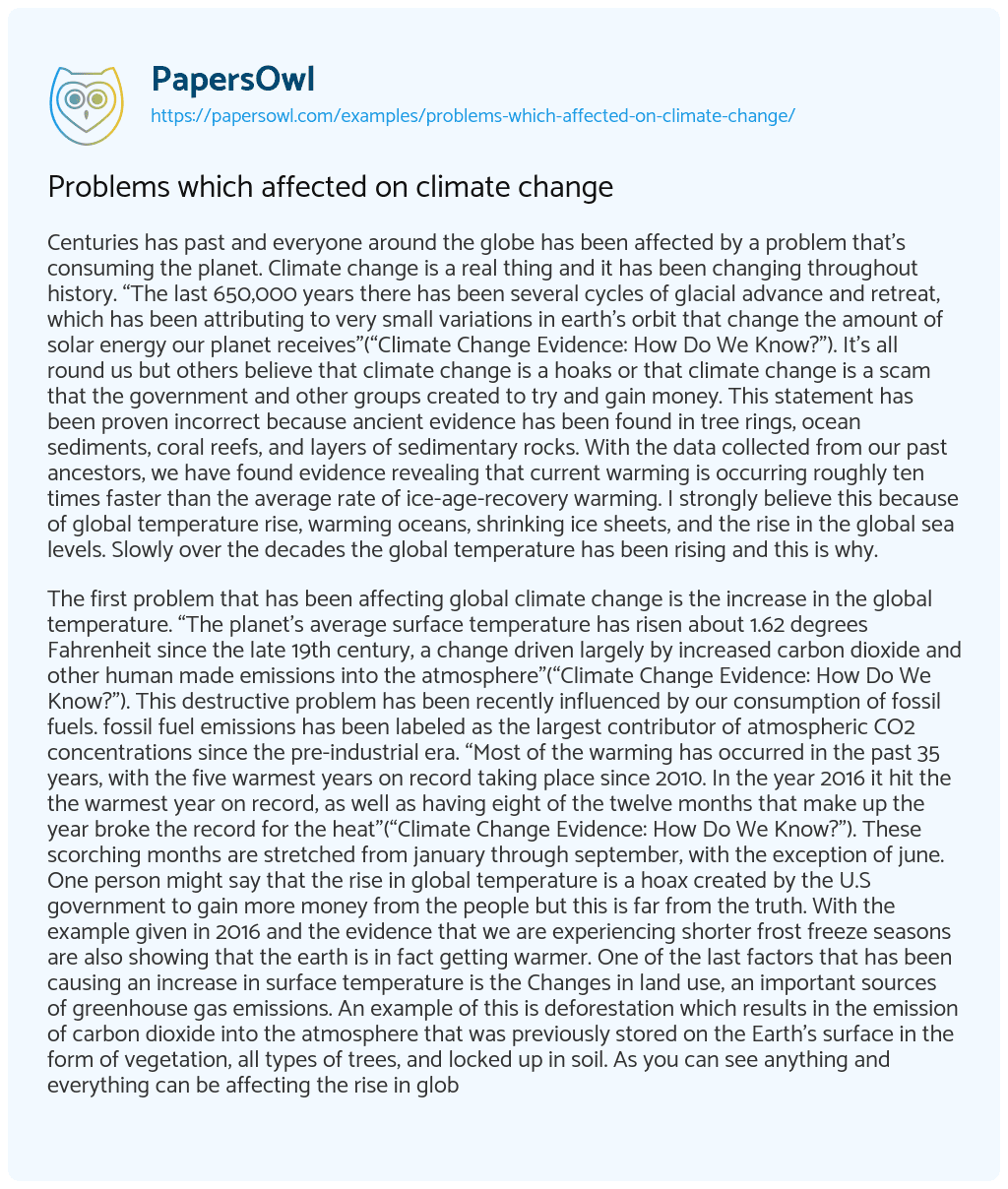 Centuries has past and everyone around the globe has been affected by a problem that’s consuming the planet. Climate change is a real thing and it has been changing throughout history. “The last 650,000 years there has been several cycles of glacial advance and retreat, which has been attributing to very small variations in earth’s orbit that change the amount of solar energy our planet receives”(“Climate Change Evidence: How Do We Know?”). It’s all round us but others believe that climate change is a hoaks or that climate change is a scam that the government and other groups created to try and gain money. This statement has been proven incorrect because ancient evidence has been found in tree rings, ocean sediments, coral reefs, and layers of sedimentary rocks. With the data collected from our past ancestors, we have found evidence revealing that current warming is occurring roughly ten times faster than the average rate of ice-age-recovery warming. I strongly believe this because of global temperature rise, warming oceans, shrinking ice sheets, and the rise in the global sea levels. Slowly over the decades the global temperature has been rising and this is why.

The first problem that has been affecting global climate change is the increase in the global temperature. “The planet’s average surface temperature has risen about 1.62 degrees Fahrenheit since the late 19th century, a change driven largely by increased carbon dioxide and other human made emissions into the atmosphere”(“Climate Change Evidence: How Do We Know?”). This destructive problem has been recently influenced by our consumption of fossil fuels. fossil fuel emissions has been labeled as the largest contributor of atmospheric CO2 concentrations since the pre-industrial era. “Most of the warming has occurred in the past 35 years, with the five warmest years on record taking place since 2010. In the year 2016 it hit the the warmest year on record, as well as having eight of the twelve months that make up the year broke the record for the heat”(“Climate Change Evidence: How Do We Know?”). These scorching months are stretched from january through september, with the exception of june. One person might say that the rise in global temperature is a hoax created by the U.S government to gain more money from the people but this is far from the truth. With the example given in 2016 and the evidence that we are experiencing shorter frost freeze seasons are also showing that the earth is in fact getting warmer. One of the last factors that has been causing an increase in surface temperature is the Changes in land use, an important sources of greenhouse gas emissions. An example of this is deforestation which results in the emission of carbon dioxide into the atmosphere that was previously stored on the Earth’s surface in the form of vegetation, all types of trees, and locked up in soil. As you can see anything and everything can be affecting the rise in global temperature so we need to make a stand against this problem before it enguls the whole world.

The next factor that is proving that global climate change is real is the warming of the oceans. The oceans have been acting recently like a blanket sadly because they have been absorbing much of the increased heat over the century. “With the top 700 meters (about 2,300 feet) of the ocean has been showing a warming in the temperature by more than 0.4 degrees Fahrenheit since the year 1969. Since 1955, over ninety percent of the excess heat trapped by greenhouse gases has been stored in the oceans”(Bryce. Ocean Warming). With this being said the ocean has consumed about ninety percent of the excess heat, with sixty percent being located at the top 700 meters and the other thirty percent being absorbed below. The president might say that he personally haven’t felt a difference in the increased temperature and therefore doesn’t believe in the water temperature rising. This statement is incorrect because the oceans have caused people living at the surface of the land, ocean and atmosphere, to only feel a small portion of the true warming cost of greenhouse gas emissions. These temperature differences might not seem like much but every slight increase in temperature can change the behaviors of some major ecosystems. Every increase in the water temperature has been causing thermal stress to build up and change the PH levels. Warming of the oceans is playing a significant role in mass coral bleaching events and infectious disease outbreaks. “Additionally, carbon dioxide absorbed into the ocean from the atmosphere has already begun to reduce calcification rates in reef-building and reef-associated organisms by altering the pH levels of the seawater”(Bryce. Ocean Warming). As you can tell if we don’t make a difference about the warming of the oceans then we will inevitably destroy ourselves and everything around us.

Another problem that humanity has brought upon itself is the shrinking of the ice sheets. One of the largest and easiest examples to prove that global warming is real, is that the greenland and antarctic ice sheets have decreased in mass. Data from NASA’s Gravity Recovery and Climate Experiment “show Greenland lost an average of 281 billion tons of ice per year between 1993 and 2016, while Antarctica lost about 119 billion tons during the same time period.” With these enormous numbers, the rate of Antarctica ice mass loss has tripled in the last decade. Warming of the oceans as stated in the previous paragraph has also a large effect on the melting of the ice as the ice cant stay solid when temperature rise too much. Someone might say that there is already an abundance of ice sheets so it’s okay to have ice melt, but this is far from being correct because Greenland’s summer melt season now lasts 70 days longer than what it did in the early 1970s. “Every summer, warmer air temperatures cause a melt over about half of the surface of the ice sheet although recently, 2012 saw an extreme event where 97 percent of the ice sheet experienced melt at its top layer”(“Warming Seas and Melting Ice Sheets – Climate Change: Vital Signs of the Planet.”). The final example i will demonstrate to show how the melting of the glaciers is getting out of control is in the early 2000s when the Jakobshavn ice stream in greenland revealed themselves, which was when we saw the fastest glacier we knew of to doubled its speed. As you can tell the melting of the ice sheets are inevitable to ignore, so let’s preserve what we have left and try to recover for what we have already lost.

Finally, the last topic that supports the fact that global climate change is real is the rise in global sea levels. Over the last century our global sea level has risen about eight inches. The rate in the last two decades, has nearly doubled that of the last century and is accelerating slightly every year. ‘Given what we know now about how the ocean expands as it warms and how ice sheets and glaciers are adding water to the seas, it’s pretty certain we are locked into at least 3 feet of sea level rise,’ said Steve Nerem”(“Warming Seas and Melting Ice Sheets – Climate Change: Vital Signs of the Planet.”). Some people might say that the ice melting is apart of life and that we should leave it be, but this can’t be close to correct since humans are the main reason the glaciers are melting, not nature. With the constant melting of the ice our researchers bring up the idea that the sea levels can rise up to ten feet in a matter of a century or two if we don’t figure out a way to slow down the ice sheets from melting. “In 2017, global mean sea level was 3 inches (77 millimeters) above the 1993 average the highest annual average in the satellite record”(“Warming Seas and Melting Ice Sheets – Climate Change: Vital Signs of the Planet.”). Now these numbers might seem small but if we take a look at the big picture if the world’s temperature rises by three to four degrees then millions of people will begin to flee coastal areas, and cities will begin to vanish, and leaving some behind to become islands. The ice at both poles will eventually vanish and with this alone we could see a rise in sea levels as much as 50 m. the sea level will rise so high that it will engulf not just neighborhoods but cities! No one should want to live in a world where they have to watch there homes become a body of water so lets make a difference and try to sculpt the future as we want it instead of letting it control us.

In the end it’s impossible to hide from the truth, the facts are in front of humanity’s faces and it’s our job to change our mistakes before it’s too late. It’s time to hold everyone accountable for our carbon footprints, and look to make a difference instead of pushing it off and expecting the next generation to do something about it. It doesn’t matter your age to start making a difference because even though you might not be alive to see the difference, your children will and your children’s children will have to live in the world that we either destroy or build back up. There are countless small things that you can do on a daily basis to help keep our planet green and a few of them are to eat less meat since cows emit the most methane, commute green (ride a bike, or carpool), unplug electronics/outlets when not using them, and prevent water waste. Now go make a difference in the world!

Problems which affected on climate change. (2021, Oct 17). Retrieved from https://papersowl.com/examples/problems-which-affected-on-climate-change/

The Terrible Consequences of Climate Change

Climate Change in Oceans and its Impacts