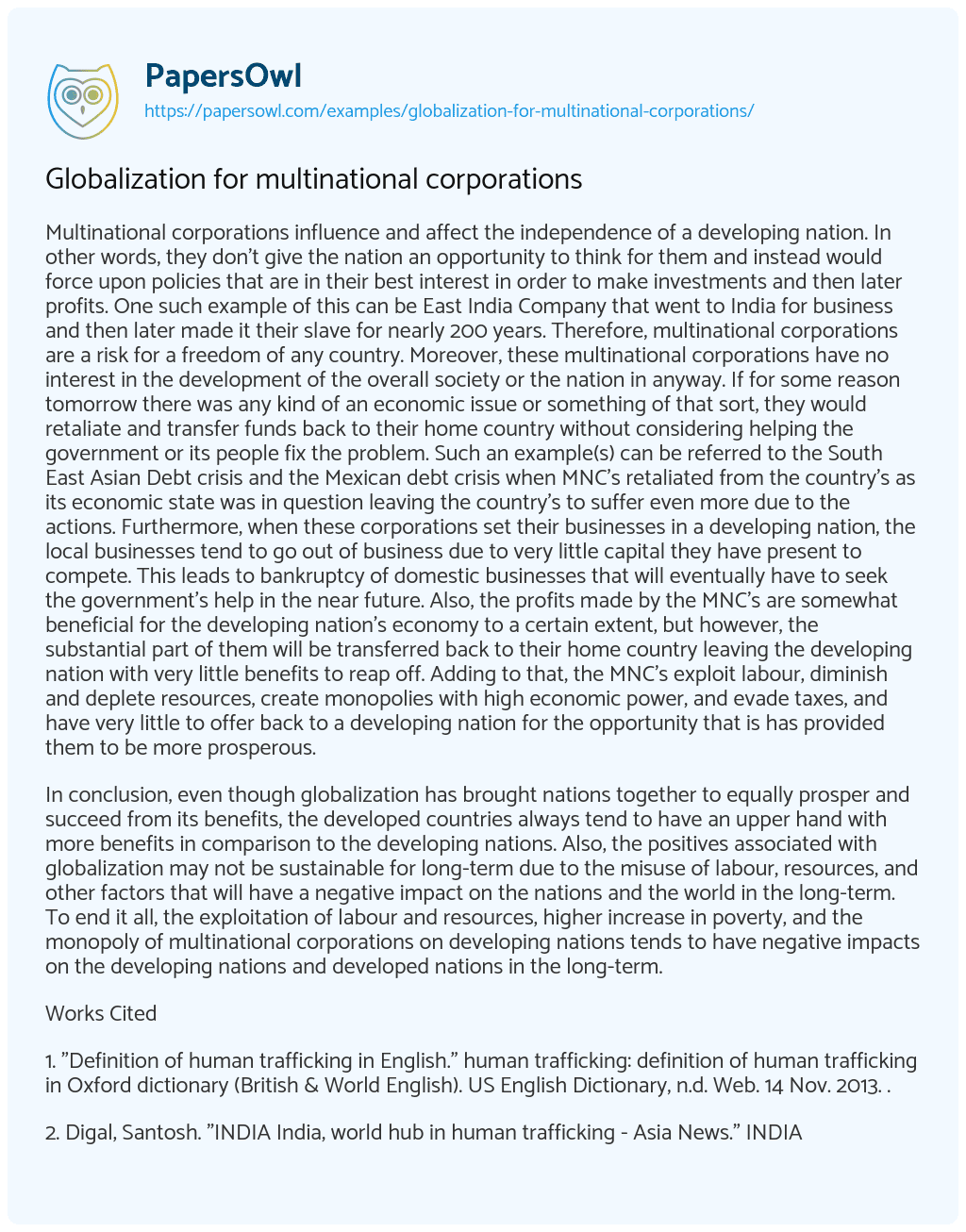 Multinational corporations influence and affect the independence of a developing nation. In other words, they don’t give the nation an opportunity to think for them and instead would force upon policies that are in their best interest in order to make investments and then later profits. One such example of this can be East India Company that went to India for business and then later made it their slave for nearly 200 years. Therefore, multinational corporations are a risk for a freedom of any country. Moreover, these multinational corporations have no interest in the development of the overall society or the nation in anyway. If for some reason tomorrow there was any kind of an economic issue or something of that sort, they would retaliate and transfer funds back to their home country without considering helping the government or its people fix the problem. Such an example(s) can be referred to the South East Asian Debt crisis and the Mexican debt crisis when MNC’s retaliated from the country’s as its economic state was in question leaving the country’s to suffer even more due to the actions. Furthermore, when these corporations set their businesses in a developing nation, the local businesses tend to go out of business due to very little capital they have present to compete. This leads to bankruptcy of domestic businesses that will eventually have to seek the government’s help in the near future. Also, the profits made by the MNC’s are somewhat beneficial for the developing nation’s economy to a certain extent, but however, the substantial part of them will be transferred back to their home country leaving the developing nation with very little benefits to reap off. Adding to that, the MNC’s exploit labour, diminish and deplete resources, create monopolies with high economic power, and evade taxes, and have very little to offer back to a developing nation for the opportunity that is has provided them to be more prosperous.

In conclusion, even though globalization has brought nations together to equally prosper and succeed from its benefits, the developed countries always tend to have an upper hand with more benefits in comparison to the developing nations. Also, the positives associated with globalization may not be sustainable for long-term due to the misuse of labour, resources, and other factors that will have a negative impact on the nations and the world in the long-term. To end it all, the exploitation of labour and resources, higher increase in poverty, and the monopoly of multinational corporations on developing nations tends to have negative impacts on the developing nations and developed nations in the long-term.