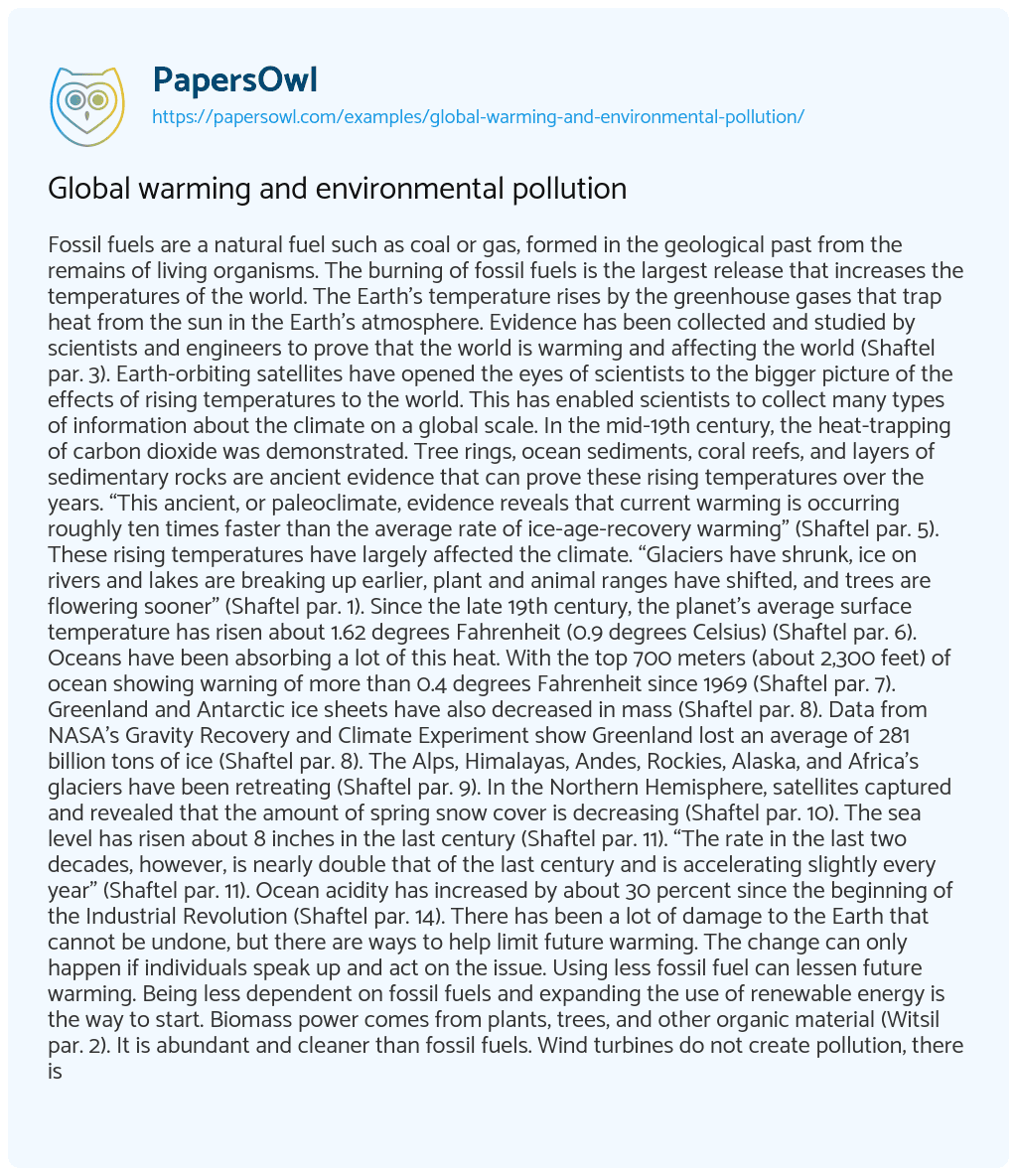 Fossil fuels are a natural fuel such as coal or gas, formed in the geological past from the remains of living organisms. The burning of fossil fuels is the largest release that increases the temperatures of the world. The Earth’s temperature rises by the greenhouse gases that trap heat from the sun in the Earth’s atmosphere. Evidence has been collected and studied by scientists and engineers to prove that the world is warming and affecting the world (Shaftel par. 3). Earth-orbiting satellites have opened the eyes of scientists to the bigger picture of the effects of rising temperatures to the world. This has enabled scientists to collect many types of information about the climate on a global scale. In the mid-19th century, the heat-trapping of carbon dioxide was demonstrated. Tree rings, ocean sediments, coral reefs, and layers of sedimentary rocks are ancient evidence that can prove these rising temperatures over the years. “This ancient, or paleoclimate, evidence reveals that current warming is occurring roughly ten times faster than the average rate of ice-age-recovery warming” (Shaftel par. 5). These rising temperatures have largely affected the climate. “Glaciers have shrunk, ice on rivers and lakes are breaking up earlier, plant and animal ranges have shifted, and trees are flowering sooner” (Shaftel par. 1). Since the late 19th century, the planet’s average surface temperature has risen about 1.62 degrees Fahrenheit (0.9 degrees Celsius) (Shaftel par. 6). Oceans have been absorbing a lot of this heat. With the top 700 meters (about 2,300 feet) of ocean showing warning of more than 0.4 degrees Fahrenheit since 1969 (Shaftel par. 7). Greenland and Antarctic ice sheets have also decreased in mass (Shaftel par. 8). Data from NASA’s Gravity Recovery and Climate Experiment show Greenland lost an average of 281 billion tons of ice (Shaftel par. 8). The Alps, Himalayas, Andes, Rockies, Alaska, and Africa’s glaciers have been retreating (Shaftel par. 9). In the Northern Hemisphere, satellites captured and revealed that the amount of spring snow cover is decreasing (Shaftel par. 10). The sea level has risen about 8 inches in the last century (Shaftel par. 11). “The rate in the last two decades, however, is nearly double that of the last century and is accelerating slightly every year” (Shaftel par. 11). Ocean acidity has increased by about 30 percent since the beginning of the Industrial Revolution (Shaftel par. 14). There has been a lot of damage to the Earth that cannot be undone, but there are ways to help limit future warming. The change can only happen if individuals speak up and act on the issue. Using less fossil fuel can lessen future warming. Being less dependent on fossil fuels and expanding the use of renewable energy is the way to start. Biomass power comes from plants, trees, and other organic material (Witsil par. 2). It is abundant and cleaner than fossil fuels. Wind turbines do not create pollution, there is limited maintenance, and is relatively inexpensive to build (Witsil par. 1). Some utility companies now generate a lot of their energy from safer and cleaner sources. “Choose a utility company that generates at least half its power from wind or solar and has been certified by Green-e-Energy” (Denchak par. 6). There are now refrigeration’s, washing machines, and other appliances that have star labels on them (Denchak par. 8). It tells you which of the products are most efficient. “Efficiency standards for dozens of appliances and products have kept 2.3 billion tons of carbon dioxide out of the air” (Denchak par. 8). LED light bulbs use up to 80 percent less energy than conventional incandescent as well (Denchak par. 11). With every pro, there are cons. Oppositions play a big role in every change. The world runs off fossil fuel. It powers our cars, homes, jobs, etc. Expanding the use of renewable energy can be smart but it also can be difficult. Wind turbines will not produce energy if there is not any wind.

These also require a lot of land to be built. Biomass power can also result in air pollution, and it takes a lot of energy to produce (Witsil par. 2). The downside of renewable energy mostly depends on weather conditions, which can make it much harder to use. A great deal of land may be required to capture large amounts of renewable energy. Solar panels require a great deal of land, money, and is also predicted by weather. Our world is full of fossil fuels. Without these fossil fuels, Earth would not be sustainable to live in (Moore par. 1). “We live in a greenhouse world; without such gases, Earth would be too cold to sustain life as we know it” (Moore par. 1). Carbon dioxide, methane, and nitrous oxide contribute to a warmer world (Moore par. 1). Individuals believe that a warmer world will help banking, insurance, medical services, retailing, and education prosper (Moore par. 5). A climate that is warmer will lower the cost of transportation. “A warmer climate will lower transportation costs: less snow and ice will torment truckers and automobile drivers; fewer winter storms will disrupt air travel; bad weather in the summer has few disruptive effects and passes quickly; a lower incidence of storms and less fog will make shipping less risky” (Moore par. 5). In other parts of the world, warmer weather could mean longer growing seasons. A warming climate could really be beneficial to our world. Evidence has been collected and studied by scientists and engineers to prove that the world is warming and affecting the world. The evidence that has been found has proven that the world is warming at faster rates than before. There are so many solutions that could benefit the world. The damage to the atmosphere has already been done. The only way to try to resolve this issue is to create a better and safer future.

Global warming and environmental pollution. (2022, May 01). Retrieved from https://papersowl.com/examples/global-warming-and-environmental-pollution/