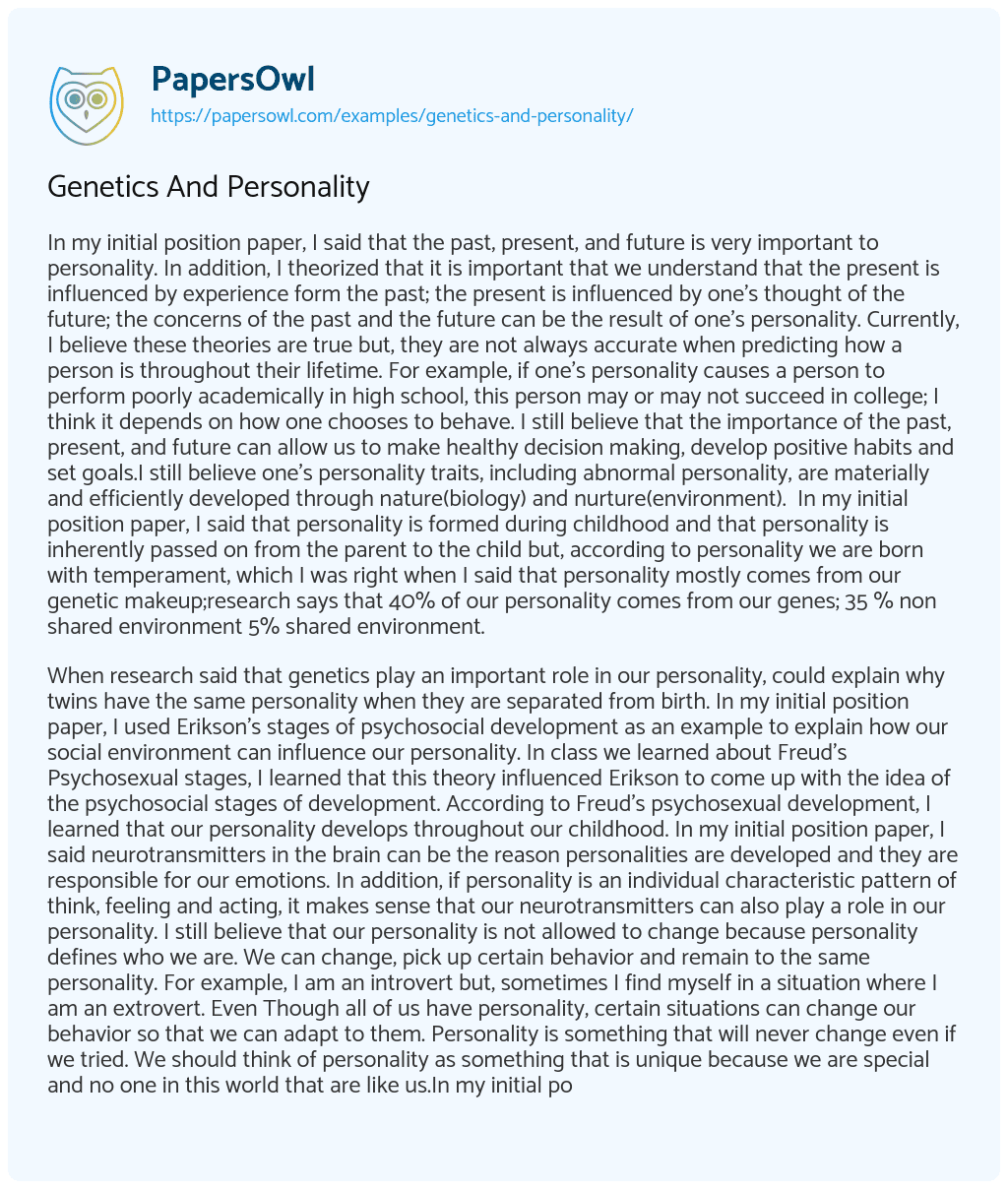 In my initial position paper, I said that the past, present, and future is very important to personality. In addition, I theorized that it is important that we understand that the present is influenced by experience form the past; the present is influenced by one’s thought of the future; the concerns of the past and the future can be the result of one’s personality. Currently, I believe these theories are true but, they are not always accurate when predicting how a person is throughout their lifetime. For example, if one’s personality causes a person to perform poorly academically in high school, this person may or may not succeed in college; I think it depends on how one chooses to behave. I still believe that the importance of the past, present, and future can allow us to make healthy decision making, develop positive habits and set goals.I still believe one’s personality traits, including abnormal personality, are materially and efficiently developed through nature(biology) and nurture(environment).  In my initial position paper, I said that personality is formed during childhood and that personality is inherently passed on from the parent to the child but, according to personality we are born with temperament, which I was right when I said that personality mostly comes from our genetic makeup;research says that 40% of our personality comes from our genes; 35 % non shared environment 5% shared environment.

When research said that genetics play an important role in our personality, could explain why twins have the same personality when they are separated from birth. In my initial position paper, I used Erikson’s stages of psychosocial development as an example to explain how our social environment can influence our personality. In class we learned about Freud’s Psychosexual stages, I learned that this theory influenced Erikson to come up with the idea of the psychosocial stages of development. According to Freud’s psychosexual development, I learned that our personality develops throughout our childhood. In my initial position paper, I said neurotransmitters in the brain can be the reason personalities are developed and they are responsible for our emotions. In addition, if personality is an individual characteristic pattern of think, feeling and acting, it makes sense that our neurotransmitters can also play a role in our personality. I still believe that our personality is not allowed to change because personality defines who we are. We can change, pick up certain behavior and remain to the same personality. For example, I am an introvert but, sometimes I find myself in a situation where I am an extrovert. Even Though all of us have personality, certain situations can change our behavior so that we can adapt to them. Personality is something that will never change even if we tried. We should think of personality as something that is unique because we are special and no one in this world that are like us.In my initial position paper, I said behavior can be changed by interactions, through social and cultural environments Now, I believe this is still true but, according to personality, I believe social and cultural environments play a role in revealing something about our personality. I think when a person is exposed socially and culturally in an environment this will shape them into who they are in the present. For example, being in a religious environment has shaped me, to be honest, and cautious I am today. Again, I previously theorized that the present is influenced by experiences from the past; the present is influenced by one’ thoughts of the future; the concern of the past and the future can be a result of personality I the present.

For example,In my initial position paper, I said that psychologist should go studying their subject by having knowledge of their history. In addition, the history on the subject matter will help a psychologist gain understanding in what they are studying. In my initial position paper, I  also did not have the knowledge on how to study subject matter. Now, I have the knowledge that there are many ways to study subject matter, these are self-reports, interviews, observation, objective testing. Self – report on the subject matter can help a psychologist understand how a person is feeling or thinking, the problem with a self-report will be that the person may lie or overexaggerate on how they are feeling or thinking. Interviews can help a psychologist read their patient body language, the problem with an interview will be that the patient may lie when answering interview questions. Observation can help a psychologist to study their subject matter to understand how a person acts in real life situations, the problem with observation is that include the psychologist to be biased and, does not tell everything about the person. I made up different ways we can study personality. My response in my initial position paper will be reflected in the new ideas I could use in my therapeutic, parenting, or research and technique. The knowledge that I gained in my personality theories class, allowed me to come up with my own theory of personality that I can use in my practice, research and life.

Classical could suggest that a person is a know-it-all and people that listen to it are creative, introverts and overly confident. Rock or Heavy metal fan could suggest that a person tend to be highly neurotic,  introverted, less open and less self- esteem. People who enjoy jazz, blues and r&b may tend to have high self- esteem; to be creative, smart and extroverted. Country music fans may tend to be more neurotic, conscientious and extroverted.The way we take pictures may reveal something about our personality. A picture means a thousand words and may reveal more about our personality then we realize. People that show positive facial expressions like smiling and laughing could mean that a person is creative and open to new ideas. The “duck face” could reveal that a person is emotionally unstable or neurotic. Extraverted and agreeable people may take pictures with a crowd; Conscientious people may take a picture in the workplace or other professional settings.  Handwriting could play a role in personality. I think spaces between words, how large or small we write could reveal something about us. People who write large are probably open, persistent and honest.This is because,  write large and I describe myself as open, persistent and honest.  People who write small probably are a well-mannered, introverted, role model and independent. This is because my brother writes small and he describes himself as well- mattered, introverted, role-model and introverted.  People who slant to the right may suggest that they are humor, critical and intelligent. This is because I know someone who slants their words to the right, and this is how the person describes himself. People who slant their to the left reveals that they are creative, introverted and self-reserved. This is because I know someone who slants their writing to the left; this is how I describe their personality.

Each Person’s Personality is Different