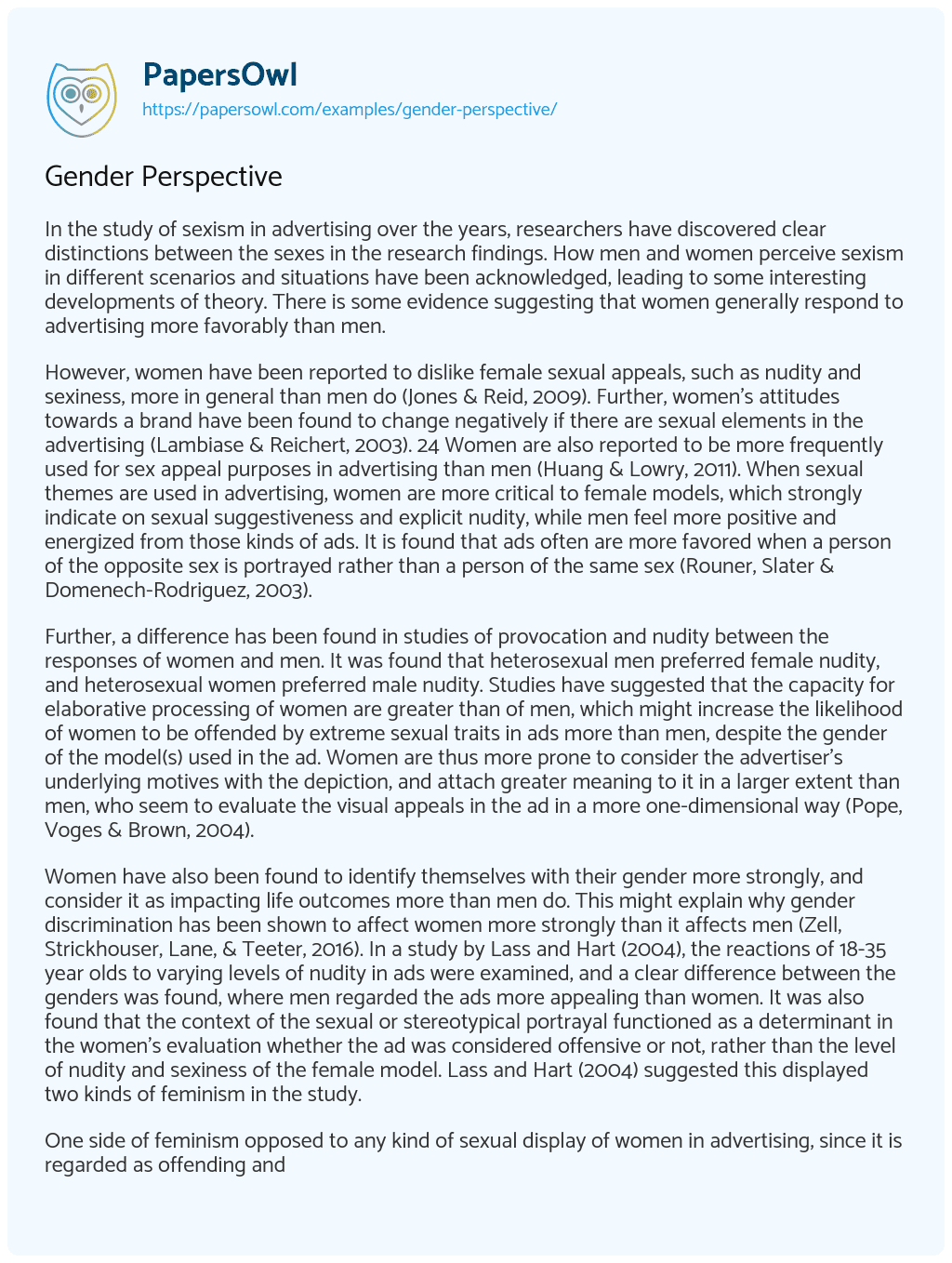 In the study of sexism in advertising over the years, researchers have discovered clear distinctions between the sexes in the research findings. How men and women perceive sexism in different scenarios and situations have been acknowledged, leading to some interesting developments of theory. There is some evidence suggesting that women generally respond to advertising more favorably than men.

However, women have been reported to dislike female sexual appeals, such as nudity and sexiness, more in general than men do (Jones & Reid, 2009). Further, women’s attitudes towards a brand have been found to change negatively if there are sexual elements in the advertising (Lambiase & Reichert, 2003). 24 Women are also reported to be more frequently used for sex appeal purposes in advertising than men (Huang & Lowry, 2011). When sexual themes are used in advertising, women are more critical to female models, which strongly indicate on sexual suggestiveness and explicit nudity, while men feel more positive and energized from those kinds of ads. It is found that ads often are more favored when a person of the opposite sex is portrayed rather than a person of the same sex (Rouner, Slater & Domenech-Rodriguez, 2003).

Further, a difference has been found in studies of provocation and nudity between the responses of women and men. It was found that heterosexual men preferred female nudity, and heterosexual women preferred male nudity. Studies have suggested that the capacity for elaborative processing of women are greater than of men, which might increase the likelihood of women to be offended by extreme sexual traits in ads more than men, despite the gender of the model(s) used in the ad. Women are thus more prone to consider the advertiser’s underlying motives with the depiction, and attach greater meaning to it in a larger extent than men, who seem to evaluate the visual appeals in the ad in a more one-dimensional way (Pope, Voges & Brown, 2004).

Women have also been found to identify themselves with their gender more strongly, and consider it as impacting life outcomes more than men do. This might explain why gender discrimination has been shown to affect women more strongly than it affects men (Zell, Strickhouser, Lane, & Teeter, 2016). In a study by Lass and Hart (2004), the reactions of 18-35 year olds to varying levels of nudity in ads were examined, and a clear difference between the genders was found, where men regarded the ads more appealing than women. It was also found that the context of the sexual or stereotypical portrayal functioned as a determinant in the women’s evaluation whether the ad was considered offensive or not, rather than the level of nudity and sexiness of the female model. Lass and Hart (2004) suggested this displayed two kinds of feminism in the study.

One side of feminism opposed to any kind of sexual display of women in advertising, since it is regarded as offending and objectifies the woman. The other side of feminism did not oppose sexual display of women as long as the woman is depicted as being independent and strong, or in domination of a man. Research has shown that using less traditional depictions of the female sex role is both more effective and more preferred by women than the more traditional portrayals (Rouner, Slater & Domenech-Rodriguez, 2003). However, both men and women have shown negative feelings towards a too distinct gender depiction of the opposite sex (Hofmann, 2016). Another type of sexual appeal that is 25 recurrently used in advertising is humor (Jones & Reid, 2009), and it has been suggested by some researchers that men typically responds more positively to humor in ads than women do (Hensel & Riecken, 2012). Attitude-Towards-the-Ad Model Previous studies have shown that consumer attitudes are influenced through advertisements, either positively or negatively, which can be assessed through the Attitude Towards the Ad Model (See Figure 1) (Batra & Ray, 1986; Cacioppo, Petty & Morris, 1983; MacKenzie, Lutz, & Belch, 1986; Moore & Hutchinson, 1983).

More specifically, previous authors have examined consumer attitudes towards sexual objectification of women in advertisements and came to different conclusions (e.g. Infanger, Bosak & Sczesny, 2012; Pope, Voges & Brown, 2004; Severn, Belch & Belch, 1990; Vezich, Gunter & Liebermann, 2017). Since this study attempts to understand consumer attitudes and purchase intention towards sexually objectifying advertisements, this model was identified as an appropriate basis for the analytical framework. As discussed, one aspect that has been shown to influence consumer attitudes and is of importance for advertising strategies is the social impact (Boddewyn, 1991; D’Emilio & Freedman, 1988; LaTour & Henthorne, 1994; Sassatelli, 2007). LaTour and Henthorne (1994) found that advertisers must always take current society into consideration, since the moral and ethical view of society changes over time. Similarly, Boddewyn (1991) as well as D’Emilio and Freedman (1988) argued that advertising that portrayed sexual objectification could have been effective for a specific period of time but may result in the contrary at another time. Additionally, Sassatelli (2007) argues that advertising can reproduce the prevailing societal differences and also, although more seldom, encourage new social orientations and tendencies. Moreover, in the current society, authenticity is a must in contemporary advertising (Cornelis & Peter, 2017; Napoli et al., 2014; Schwabel, 2015; Ting, de Run & Jee, 2015).

However, in the current context, where sexism is largely discussed and women have gained a higher social position than decades ago, it can be argued that sexually objectifying advertisements are not perceived as authentic by current consumers. Various authors have highlighted that consumers seek for authenticity when they process advertising content (Beverland, Lindgreen & Vink, 2008; Napoli et al., 2014; Rose & Wood, 2005).

Therefore, given the above arguments, we identify a potential connection between attitudes and purchase intention of consumers toward sexist advertisement and the existing Attitude-Towards-the-Ad model. Effectively, we recognize a potential connection between Malaysians’ consumer attitudes and their purchase intention towards sexually objectifying advertisements.

Essay on Investigation of Sexism