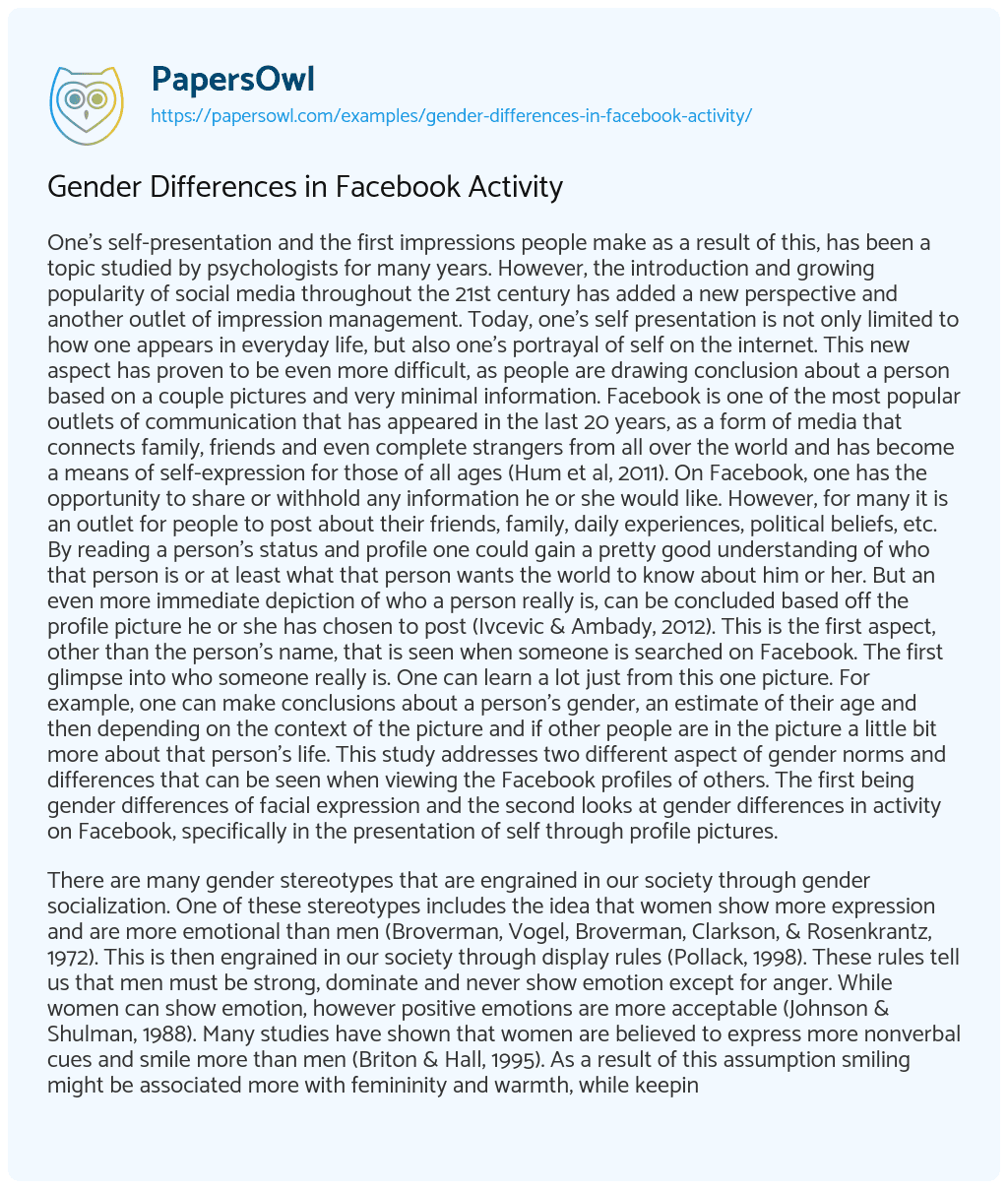 One’s self-presentation and the first impressions people make as a result of this, has been a topic studied by psychologists for many years. However, the introduction and growing popularity of social media throughout the 21st century has added a new perspective and another outlet of impression management. Today, one’s self presentation is not only limited to how one appears in everyday life, but also one’s portrayal of self on the internet. This new aspect has proven to be even more difficult, as people are drawing conclusion about a person based on a couple pictures and very minimal information. Facebook is one of the most popular outlets of communication that has appeared in the last 20 years, as a form of media that connects family, friends and even complete strangers from all over the world and has become a means of self-expression for those of all ages (Hum et al, 2011). On Facebook, one has the opportunity to share or withhold any information he or she would like. However, for many it is an outlet for people to post about their friends, family, daily experiences, political beliefs, etc. By reading a person’s status and profile one could gain a pretty good understanding of who that person is or at least what that person wants the world to know about him or her. But an even more immediate depiction of who a person really is, can be concluded based off the profile picture he or she has chosen to post (Ivcevic & Ambady, 2012). This is the first aspect, other than the person’s name, that is seen when someone is searched on Facebook. The first glimpse into who someone really is. One can learn a lot just from this one picture. For example, one can make conclusions about a person’s gender, an estimate of their age and then depending on the context of the picture and if other people are in the picture a little bit more about that person’s life. This study addresses two different aspect of gender norms and differences that can be seen when viewing the Facebook profiles of others. The first being gender differences of facial expression and the second looks at gender differences in activity on Facebook, specifically in the presentation of self through profile pictures.

There are many gender stereotypes that are engrained in our society through gender socialization. One of these stereotypes includes the idea that women show more expression and are more emotional than men (Broverman, Vogel, Broverman, Clarkson, & Rosenkrantz, 1972). This is then engrained in our society through display rules (Pollack, 1998). These rules tell us that men must be strong, dominate and never show emotion except for anger. While women can show emotion, however positive emotions are more acceptable (Johnson & Shulman, 1988). Many studies have shown that women are believed to express more nonverbal cues and smile more than men (Briton & Hall, 1995). As a result of this assumption smiling might be associated more with femininity and warmth, while keeping a straight face might signify strength and dominance (LaFrance & Carmen, 1980). Smiling also might be seen as an expectation or necessary quality to be viewed as attractive by men (Hall ???). We wanted to test and see if this gender norm has been translated and can be seen in the profile pictures of men and women on Facebook. Therefore, our first hypothesis is that on one to four scale women will smile more in their profile pictures compared to men.

The evident differences in male and female relationships that can be seen when looking at everyday interactions is also translated and seen in Facebook profiles. Women tend to form more intimate and personal relationship and friendships with others, while men’s friendships are usually based on common interest and lack emotional intimacy (Walker, 1994). Therefore, it is not surprising that women are more active on social media, including Facebook, as it is a means to connect with family and friends (Sussman & Tyson, 2000). Women are also more likely to share photos of family and friends compared to men (Tifferet & Vilnai-Yavetz, 2014). They also tend to be more aware of their self-presentation and this could lead them to post more in order to create a more well-rounded depiction of who they are on their profiles (Kr?¤mer & Winter, 2008). Another study also showed that women appear to be more comfortable and relaxed while being photographed, compared to men who appear to be more self-conscious (Ragan, 1982). This information lead to the hypothesis that when looking at the last five years of a college students Facebook that women will have changed their profile picture more than men.