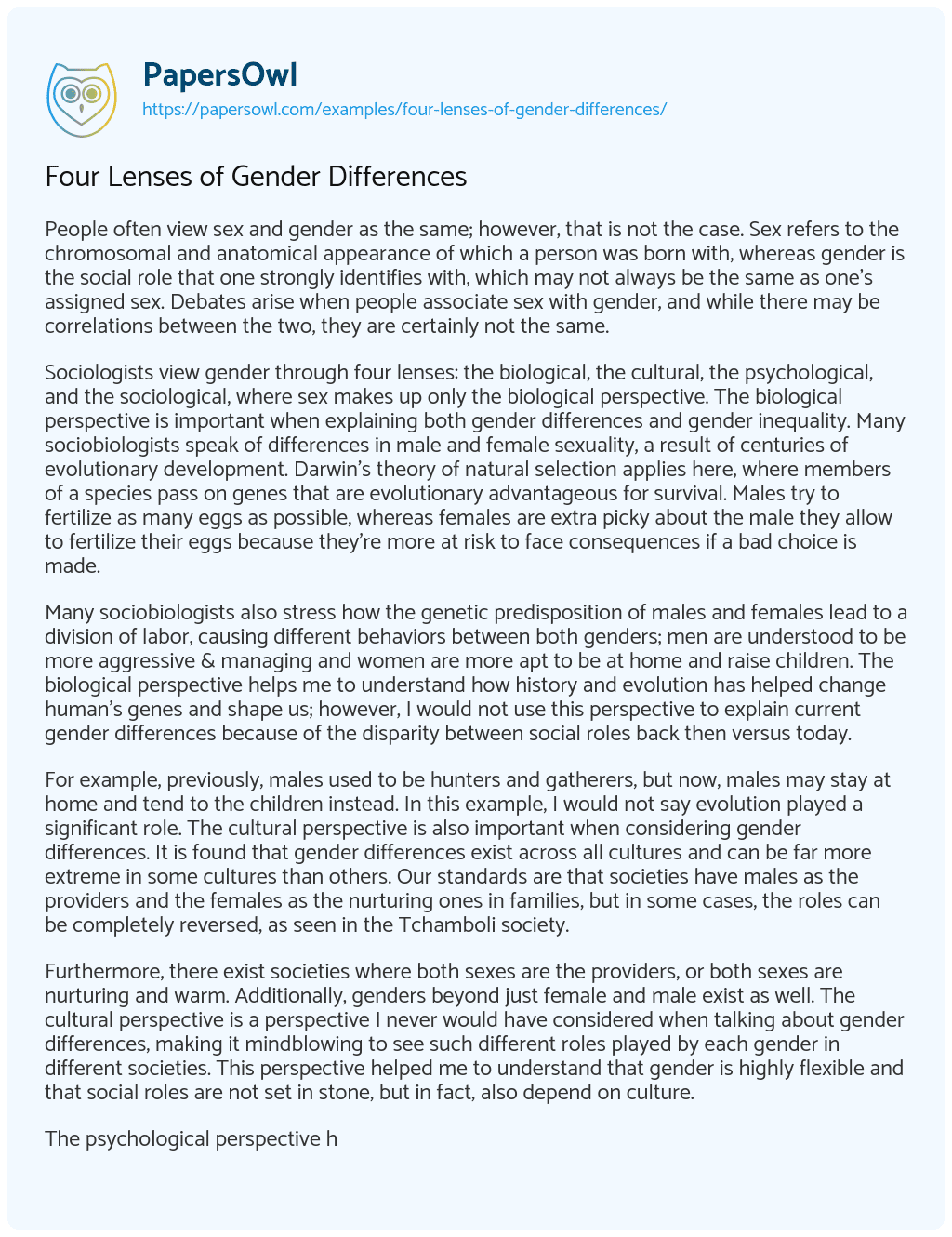 People often view sex and gender as the same; however, that is not the case. Sex refers to the chromosomal and anatomical appearance of which a person was born with, whereas gender is the social role that one strongly identifies with, which may not always be the same as one’s assigned sex. Debates arise when people associate sex with gender, and while there may be correlations between the two, they are certainly not the same.

Sociologists view gender through four lenses: the biological, the cultural, the psychological, and the sociological, where sex makes up only the biological perspective. The biological perspective is important when explaining both gender differences and gender inequality. Many sociobiologists speak of differences in male and female sexuality, a result of centuries of evolutionary development. Darwin’s theory of natural selection applies here, where members of a species pass on genes that are evolutionary advantageous for survival. Males try to fertilize as many eggs as possible, whereas females are extra picky about the male they allow to fertilize their eggs because they’re more at risk to face consequences if a bad choice is made.

Many sociobiologists also stress how the genetic predisposition of males and females lead to a division of labor, causing different behaviors between both genders; men are understood to be more aggressive & managing and women are more apt to be at home and raise children. The biological perspective helps me to understand how history and evolution has helped change human’s genes and shape us; however, I would not use this perspective to explain current gender differences because of the disparity between social roles back then versus today.

For example, previously, males used to be hunters and gatherers, but now, males may stay at home and tend to the children instead. In this example, I would not say evolution played a significant role. The cultural perspective is also important when considering gender differences. It is found that gender differences exist across all cultures and can be far more extreme in some cultures than others. Our standards are that societies have males as the providers and the females as the nurturing ones in families, but in some cases, the roles can be completely reversed, as seen in the Tchamboli society.

Furthermore, there exist societies where both sexes are the providers, or both sexes are nurturing and warm. Additionally, genders beyond just female and male exist as well. The cultural perspective is a perspective I never would have considered when talking about gender differences, making it mindblowing to see such different roles played by each gender in different societies. This perspective helped me to understand that gender is highly flexible and that social roles are not set in stone, but in fact, also depend on culture.

The psychological perspective helps to explain gender differences as well. Sigmund Freud pointed out that the experiences from infancy onward and interactions with family and society shaped the observed differences between males and females. What gender one associates with after a certain stage remains continuous until adulthood, so it is important for boys and girls to learn to disidentify with their mothers and achieve gender identity and sexual orientation. From there on, the roles of men and women are said to complement each other, an arrangement that makes a stable society.

The psychological view helps me understand that personality is gendered, and I agree that how we grew up definitely plays a role in how we act and behave. Perhaps the most important view to sociologists, the sociological perspective explains gender differences through examining power and social institutions. Gender may be about the power that men gave over women, but it is also about the power some men or women have over other men and women. Social institutions are shaped by gendered identities, but also reproduce the inequalities that created these gendered identities. The perspective that helps me the most to understand gender differences is the cultural perspective.

Gender Differences in the Classroom

Bias of Gender Differences in Negotiation