Internet Censorship should it be Allowed 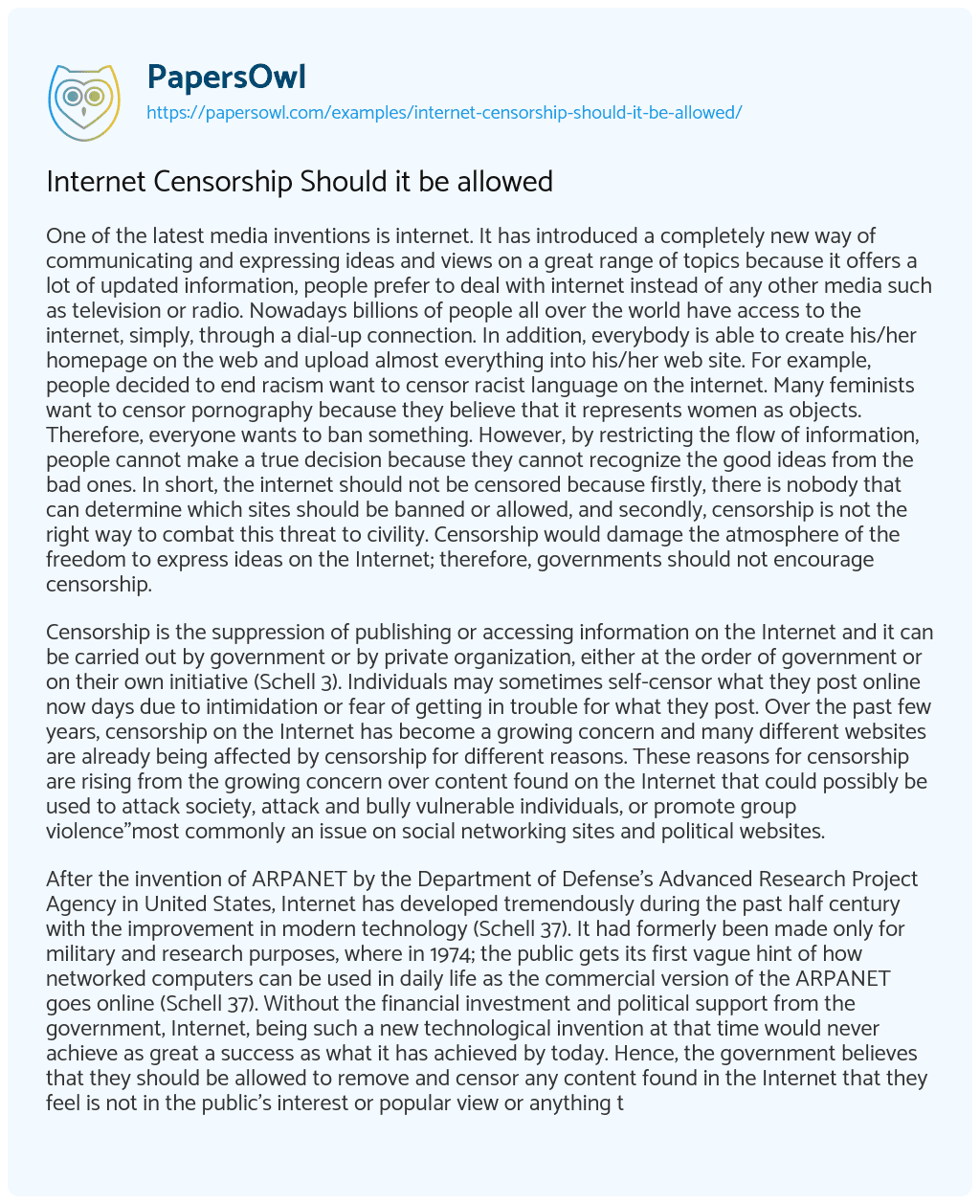 One of the latest media inventions is internet. It has introduced a completely new way of communicating and expressing ideas and views on a great range of topics because it offers a lot of updated information, people prefer to deal with internet instead of any other media such as television or radio. Nowadays billions of people all over the world have access to the internet, simply, through a dial-up connection. In addition, everybody is able to create his/her homepage on the web and upload almost everything into his/her web site. For example, people decided to end racism want to censor racist language on the internet. Many feminists want to censor pornography because they believe that it represents women as objects. Therefore, everyone wants to ban something. However, by restricting the flow of information, people cannot make a true decision because they cannot recognize the good ideas from the bad ones. In short, the internet should not be censored because firstly, there is nobody that can determine which sites should be banned or allowed, and secondly, censorship is not the right way to combat this threat to civility. Censorship would damage the atmosphere of the freedom to express ideas on the Internet; therefore, governments should not encourage censorship.

Censorship is the suppression of publishing or accessing information on the Internet and it can be carried out by government or by private organization, either at the order of government or on their own initiative (Schell 3). Individuals may sometimes self-censor what they post online now days due to intimidation or fear of getting in trouble for what they post. Over the past few years, censorship on the Internet has become a growing concern and many different websites are already being affected by censorship for different reasons. These reasons for censorship are rising from the growing concern over content found on the Internet that could possibly be used to attack society, attack and bully vulnerable individuals, or promote group violence”most commonly an issue on social networking sites and political websites.

After the invention of ARPANET by the Department of Defense’s Advanced Research Project Agency in United States, Internet has developed tremendously during the past half century with the improvement in modern technology (Schell 37). It had formerly been made only for military and research purposes, where in 1974; the public gets its first vague hint of how networked computers can be used in daily life as the commercial version of the ARPANET goes online (Schell 37). Without the financial investment and political support from the government, Internet, being such a new technological invention at that time would never achieve as great a success as what it has achieved by today. Hence, the government believes that they should be allowed to remove and censor any content found in the Internet that they feel is not in the public’s interest or popular view or anything that they feel may be offensive or hurtful to other individuals.

According to Barbour, “U.S. made many attempts to control the internet with Communication Decency Act in 1996 where it was illegal to send or display content to minors. The next attempt was Child Online Protection Act of 1998. Courts found that these laws violated the First Amendment right to free speech” (62). Internet is something that is used widely all around the world as an international and public space to communicate and exchange information with others; the government does not have the right to censor any information found online. Government is elected to serve for their own countries. They should focus only on creating and maintaining laws and the population that are relevant to their specific nation. The Internet is international and free, so no government at all should have a right to any of the information found on it. On the other hand, many people argue that even though the Internet is a global resource, the government has the right to attack any information that they find might have a negative effect on their country. They argue that it is the government’s responsibility to protect their society, and they do so by censoring threatening information or content. David Goldberger”a professor of law that specializes in issues like these”says, “Free speech, protected by the First Amendment, is communication that flows into the marketplace of ideas that allows us to decide what we think is right, what we think is wrong, what truth is and how to best govern the country” (Bethel). There is no reason for internet censorship. What we cannot get in the internet we can get at libraries, magazines, and books. Might as well ban them all too. Then ban all art, museums, farms, and whole cities too. They all contain the same thing the internet does.

There are several arguments for and against the government’s proposal for Internet regulations. Many people think the Internet should be censored because it gives underage surfers open access to undesirable material. The Internet can be freely accessed by anyone, including minors, and it is a place where people can freely exercise their constitutionally guaranteed freedom of speech. There is no secret that the Internet contains undesirable material, but the child’s parents or guardian can control whether or not child can access to that type of information. If people are so scared that their kids will accidentally cross over onto the “dark side” of the Internet, there is always parental locks, and even total ban from the internet. Even if they do not have that ability, technology will still keep on growing regardless of the efforts of the parents. Programs such as NetNanny and Surf-Watch are two of many programs that provide protection against undesirable sites. There is no need for government intervention when the solution is so simple.

Internet freedom that we exercise daily is in danger of becoming another government-regulated part of our lives. Not only is it important to protect freedom of speech, but also our individualism and self-expression. One of the reasons why so many people around the world go on the Internet is because it is a forum for free expression. We like to express ourselves, in various ways online”through videos, blogs, pictures, and music”but now days we are often getting penalized for doing so. According to an article by unofficial networks, today there are many Internet censorship bills going through congress, including the ones called PROTECT-IP (Preventing Real Online Threats to Economic Creativity and Theft of Intellectual Property Act) and SOPA (Stop Online Piracy Act). These acts focus on censoring the Internet to the entertainment industry; that is, when users post content that include music or video that do not necessarily belong to them. These acts will allow private corporations to shut down unauthorized sites where people download movies, music, and television shows. It will give the government the power to block access to sites containing this content, sue search engines and blogs that have links to any of these sites, and cancel accounts and reduce funds on websites that infringe copyrighted content (Clark).

To those who are convicted, the government would say, “Under Protect-IP and SOPA, you are a criminal for using this content without permission. And now, you will be sentenced for your crime, which you can’t really deny, because it was on the Internet and seen by all these other users” (Frevele). The intentions of this bill are not completely bad though. These bills were made to protect the properties of producers of entertainment, but the government might take it a little too far.

Internet Censorship Should it be allowed. (2019, Oct 26). Retrieved from https://papersowl.com/examples/internet-censorship-should-it-be-allowed/

The Benefits of Censorship on the Chinese Wanghong