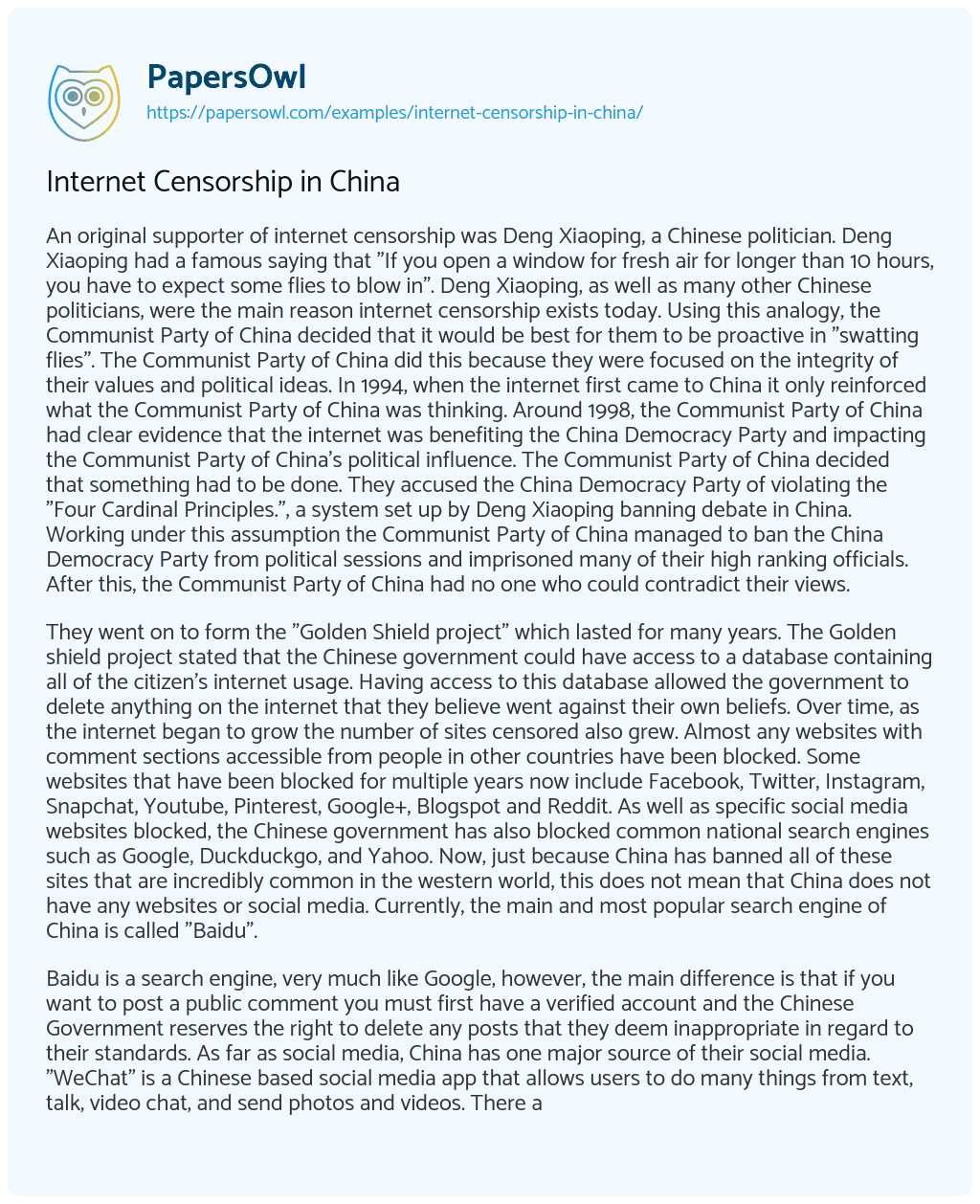 They went on to form the “Golden Shield project” which lasted for many years. The Golden shield project stated that the Chinese government could have access to a database containing all of the citizen’s internet usage. Having access to this database allowed the government to delete anything on the internet that they believe went against their own beliefs. Over time, as the internet began to grow the number of sites censored also grew. Almost any websites with comment sections accessible from people in other countries have been blocked. Some websites that have been blocked for multiple years now include Facebook, Twitter, Instagram, Snapchat, Youtube, Pinterest, Google+, Blogspot and Reddit. As well as specific social media websites blocked, the Chinese government has also blocked common national search engines such as Google, Duckduckgo, and Yahoo. Now, just because China has banned all of these sites that are incredibly common in the western world, this does not mean that China does not have any websites or social media. Currently, the main and most popular search engine of China is called “Baidu”.

Baidu is a search engine, very much like Google, however, the main difference is that if you want to post a public comment you must first have a verified account and the Chinese Government reserves the right to delete any posts that they deem inappropriate in regard to their standards. As far as social media, China has one major source of their social media. “WeChat” is a Chinese based social media app that allows users to do many things from text, talk, video chat, and send photos and videos. There are many different ways in which the Chinese government censors certain sites. Some of the technical ways that the government does this is with internet-based blocks. Because of the laws currently put in place the government has almost full control over the internet service providers (ISPs). The blocks are directly from the ISP, meaning that no matter what you search on your own computer the internet will not allow it. Many of these security measures were put in place in 2002 during an internet security conference. At the conference, the Chinese government purchased many new technologies ranging from internet censorship devices to facial recognition software.

Although there are many security measures in place to block out many websites and search engines, there are still ways to get around them. One of the main ways that people manage to get around these heavy internet blockades is using a virtual private network (VPN). Using a VPN your computer is essentially able to fool the ISP into thinking you are in a different country and it will grant you access to any site that is currently available in other countries. In many cases, Chinese citizens can get away with doing this and not have a problem. However, this is technically illegal and there have been reported cases of people being fined for getting around internet blocks. Overall, I believe that internet censorship should not exist or at least it should not be enforced by the government. If a parent wants to censor their child’s internet I believe that that is okay. However, I think that people should be entitled to free internet access and the right to share anything they wish on the internet. The internet is not just for fun and games, there are many online services attempting to connect people who may be locked in by their government to other people and linking people to the outside world. Without the internet, many people are lost and are being denied from outside information.

Internet Censorship should it be Allowed

The Benefits of Censorship on the Chinese Wanghong

The History of Censorship