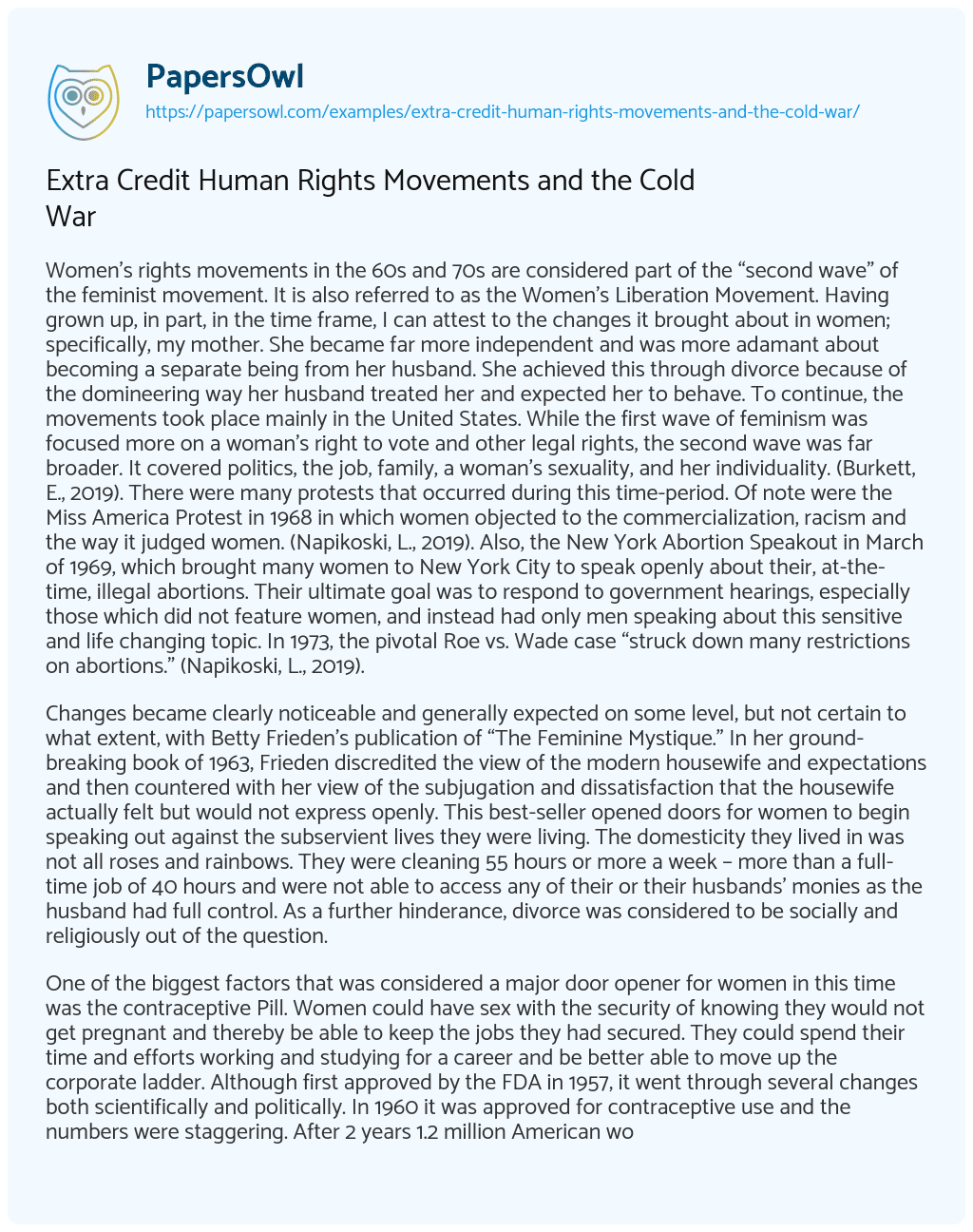 Women’s rights movements in the 60s and 70s are considered part of the “second wave” of the feminist movement. It is also referred to as the Women’s Liberation Movement. Having grown up, in part, in the time frame, I can attest to the changes it brought about in women; specifically, my mother. She became far more independent and was more adamant about becoming a separate being from her husband. She achieved this through divorce because of the domineering way her husband treated her and expected her to behave. To continue, the movements took place mainly in the United States. While the first wave of feminism was focused more on a woman’s right to vote and other legal rights, the second wave was far broader. It covered politics, the job, family, a woman’s sexuality, and her individuality. (Burkett, E., 2019). There were many protests that occurred during this time-period. Of note were the Miss America Protest in 1968 in which women objected to the commercialization, racism and the way it judged women. (Napikoski, L., 2019). Also, the New York Abortion Speakout in March of 1969, which brought many women to New York City to speak openly about their, at-the-time, illegal abortions. Their ultimate goal was to respond to government hearings, especially those which did not feature women, and instead had only men speaking about this sensitive and life changing topic. In 1973, the pivotal Roe vs. Wade case “struck down many restrictions on abortions.” (Napikoski, L., 2019).

Changes became clearly noticeable and generally expected on some level, but not certain to what extent, with Betty Frieden’s publication of “The Feminine Mystique.” In her ground-breaking book of 1963, Frieden discredited the view of the modern housewife and expectations and then countered with her view of the subjugation and dissatisfaction that the housewife actually felt but would not express openly. This best-seller opened doors for women to begin speaking out against the subservient lives they were living. The domesticity they lived in was not all roses and rainbows. They were cleaning 55 hours or more a week – more than a full-time job of 40 hours and were not able to access any of their or their husbands’ monies as the husband had full control. As a further hinderance, divorce was considered to be socially and religiously out of the question.

One of the biggest factors that was considered a major door opener for women in this time was the contraceptive Pill. Women could have sex with the security of knowing they would not get pregnant and thereby be able to keep the jobs they had secured. They could spend their time and efforts working and studying for a career and be better able to move up the corporate ladder. Although first approved by the FDA in 1957, it went through several changes both scientifically and politically. In 1960 it was approved for contraceptive use and the numbers were staggering. After 2 years 1.2 million American women were using it. After 3 years – 2.3 million. After 5 years – 6.5 million women. (Nikolchev, A., 2010.).

Finally, on this note, in 1963, Congress passed the Equal Pay Act which made it illegal for a woman to be paid less than a man for the same job. (Imbomoni, A., n.d.).

The Civil rights movements of the 1960s and 1970s were far-reaching and long-lasting. Arguably, the most prominent of the civil rights movement was Dr. Martin Luther King, Jr. His approach was one of non-violence. One of the largest barriers to civil rights for African Americans of this time was the southern conservative who still held the view that they were not and never could be equals. King’s famous “I Have A Dream” speech in Washington D.C. touched millions in August 1963. Then the country fell into despair as President John F. Kennedy was assassinated in November 1963. However, his successor, President Lyndon B. Johnson pushed for and saw the passage of the Civil Rights Act of 1964 which guaranteed equal employment for all regardless of color and eliminated the use of voter literacy tests, which had been a harbinger for African American voters (for their confusing and misleading nature, making it impossible for them to vote) and also allowed federal authorities to see to it that all public facilities became integrated. (Owlcation, June 2016; History.com Editors, Oct 2009).

On 1 December 1955, Rosa Parks was seated in the colored section of a bus in Montgomery, AL. When a white man got on and could not find a seat in the white section, the driver ordered Ms. Parks and three other colored individuals to relinquish their seats. Ms. Parks refused and was subsequently arrested for it. However, her determination led others to boycott the bus system. This ensued for 381 days and the result: in November 1956, the U.S. Supreme Court ruled that segregated seating was unconstitutional. For this, Ms. Parks is known as “the mother of the modern-day civil rights movement.” (History.com Editors, 2009).

April 4, 1968 was a dark day for all concerned about civil rights, as Martin Luther King, Jr. was assassinated in Memphis, TN. His murder set off hundreds of riots nationwide. As a result, in his honor, Congress passed the stalled Fair Housing Act on April 11th of the same year “which made it illegal for landlords, sellers and financial institutions to refuse to rent, sell or provide any financing based on any reason other than a person’s financial capabilities.” (Britannica, n.d.).

The Daughters of Bilitis (DOB) was the first lesbian organization in the U.S., founded in 1955. (Imbomoni, A., n.d.). For many years homosexuality was recognized as a mental illness and was listed in the Diagnostic and Statistical Manual of Mental Disorders (DSM) as a mental illness. In 1956, American psychologist Evelyn Hooker released her paper “The Adjustment of the Male Overt Homosexual” at the American Psychological Association Convention that took place in Chicago. The result was the change in perception of homosexuality. It would not, however, be removed from the DSM as a mental illness until December 1973. (PBS.org, n.d.).

One of the most prominent events in the history of this movement was the “Stonewall Uprising.” June 28, 1969, in Greenwich Village, NY, patrons of Stonewall Inn experienced riots after police raided the establishment. The riot lasted 3 days. (PBS.org, n.d.). It would not be until March 1982 that the gay community would really be recognized and under Wisconsin law become safe from the bias of sexual orientation legally. (PBS.org, n.d.).

While many of the securities that the LGBTQ community are now equally afforded, they did not come until the 80s and 90s, but the roots of those from the 60s and 70s brought to light the inequalities and injustices the were prevalent. It would not be until 2000, when Vermont became the first state to legalize civil unions and partnerships between same-sex couples. (PBS.org, n.d.). June 2003 would see the outlaw of sodomy (homosexuality) laws in the U.S. – making them unconstitutional, even though the state of Illinois first did this in January 1962. (PBS.org, n.d.). In May of 2004 Massachusetts became the first state to legalize gay marriage. It was not until June 2015 when the Supreme Court ruled same-sex marriage constitutional. The 13 states that had not yet legalized it had to then do so. (state.1keydata.com, n.d.).

The Eastern bloc began to crumble upon Stalin’s death in 1953. At that point, Nikita Khrushchev became the Communist Party Secretary. In 1958 he became premier. Tensions were high between the Eastern bloc and the Western hemisphere – coined the “Cold War.” Since very few in the Soviet Union knew how life in the western countries was because of strict censorship by the Soviet government, many thought they had it pretty good.

Khruschev delivered an important speech in 1956, which he intended to be a private message, but was leaked. The speech delineated many of Stalin’s crimes and following the dissemination of the message many of the Eastern bloc countries under Soviet rule seriously questioned their following of the communist way of life.

Polish intellectuals led a drive to separate from the ideology of communism. Hungarians led demonstrations in which they pushed for the abolishment of censorship, free elections and for Soviet troops to withdraw. However, in response to these uprisings, those in Soviet leadership incited massacres so they were not successful. The Soviet Union quashed all dissenters. (Pollard, E. et. Al., 2015).

As for lessons learned, I think one of the most impactful is that causes can be achieved and advanced peacefully, as evidenced by Dr. Martin Luther King, Jr. time and again. Although, I honestly feel that lesson needs to be revisited as there are many instances in recent history where 30 people cannot get together peacefully, let alone 200,000, to achieve their goals. In all, however, in the United States, we have advanced dramatically. There is still work to be done, but we have greatly improved since the 50s, 60s and 70s.

Social Movements in the US