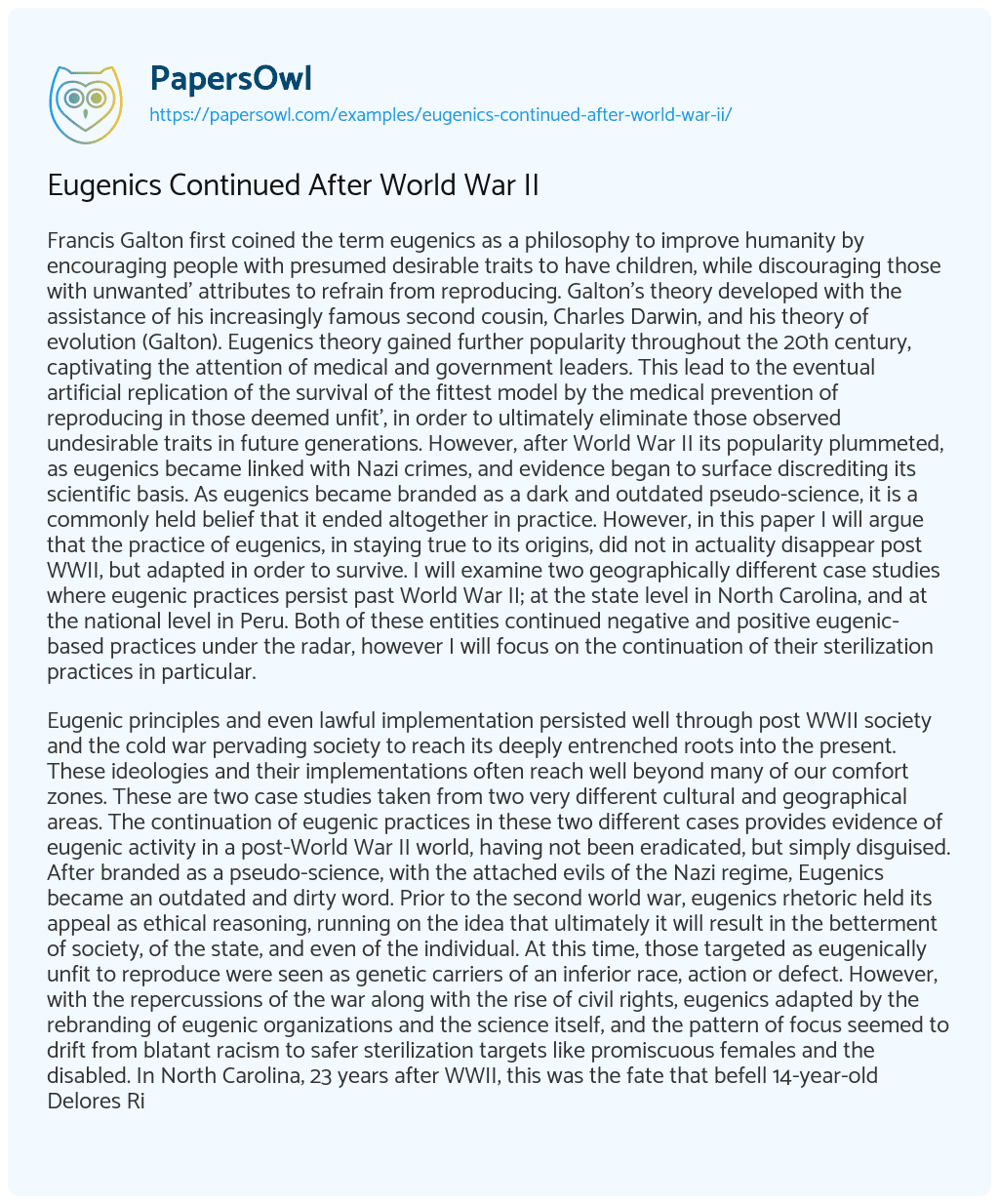 Francis Galton first coined the term eugenics as a philosophy to improve humanity by encouraging people with presumed desirable traits to have children, while discouraging those with unwanted’ attributes to refrain from reproducing. Galton’s theory developed with the assistance of his increasingly famous second cousin, Charles Darwin, and his theory of evolution (Galton). Eugenics theory gained further popularity throughout the 20th century, captivating the attention of medical and government leaders. This lead to the eventual artificial replication of the survival of the fittest model by the medical prevention of reproducing in those deemed unfit’, in order to ultimately eliminate those observed undesirable traits in future generations. However, after World War II its popularity plummeted, as eugenics became linked with Nazi crimes, and evidence began to surface discrediting its scientific basis. As eugenics became branded as a dark and outdated pseudo-science, it is a commonly held belief that it ended altogether in practice. However, in this paper I will argue that the practice of eugenics, in staying true to its origins, did not in actuality disappear post WWII, but adapted in order to survive. I will examine two geographically different case studies where eugenic practices persist past World War II; at the state level in North Carolina, and at the national level in Peru. Both of these entities continued negative and positive eugenic-based practices under the radar, however I will focus on the continuation of their sterilization practices in particular.

Eugenic principles and even lawful implementation persisted well through post WWII society and the cold war pervading society to reach its deeply entrenched roots into the present. These ideologies and their implementations often reach well beyond many of our comfort zones. These are two case studies taken from two very different cultural and geographical areas. The continuation of eugenic practices in these two different cases provides evidence of eugenic activity in a post-World War II world, having not been eradicated, but simply disguised. After branded as a pseudo-science, with the attached evils of the Nazi regime, Eugenics became an outdated and dirty word. Prior to the second world war, eugenics rhetoric held its appeal as ethical reasoning, running on the idea that ultimately it will result in the betterment of society, of the state, and even of the individual. At this time, those targeted as eugenically unfit to reproduce were seen as genetic carriers of an inferior race, action or defect. However, with the repercussions of the war along with the rise of civil rights, eugenics adapted by the rebranding of eugenic organizations and the science itself, and the pattern of focus seemed to drift from blatant racism to safer sterilization targets like promiscuous females and the disabled. In North Carolina, 23 years after WWII, this was the fate that befell 14-year-old Delores Riddick after she became pregnant at such a young age. The petition submitted to the Eugenics Board was summarized as follows:

This thirteen year old girl expects to have her first child in March 1968 She has never done any work and gets along so poorly with other that her school experience was poor. Because of Elaine’s inability to control herself, and her promiscuity there are community reports of her running around’ and out late at night unchaperoned, the physician has advised sterilization This will at least prevent additional children from being born to this child who cannot care for herself, and can never function in any way as a parent.
Diagnosis: Feebleminded (Berkowitz 53).

The consistent theme used in the defense of sterilizations was that it was for the own good of the person, for the good of the state and in this case, for the own good of her future children. There is also the strong suggestion that in addition to possessing the dangerous quality of female promiscuity, young Elaine is also disabled in such a way as she is unable to care for herself or her child. Elaine is just one of the multitude of women subjected to sterilization upon being evaluated as disabled or promiscuous in a judgement typically lasting less than fifteen minutes by those on the Eugenics Board of North Carolina. The North Carolina Eugenics board operated from 1933-1977, despite long-circulating evidence discrediting the science. It is reported that about 90% of the petitions submitted for sterilization were approved, and every sterilization case from 1929-1968 was justified by the ruling of disability by the state, with cases usually being judged in less than 15 minutes (HBLNC). This clearly provides evidence of the continuation despite discreditation of eugenic practices post WWII, with the justification of these forced sterilizations still being for the overall future benefit of society, the state, and the person themselves.

The rhetoric of Peruvian Eugenics altered slightly in the Postwar Era, shifting particular focus on the consequences of overpopulation and the economic burden of the unfit. However, these initiatives remain on the same foundations of old’ eugenic thought, insisting that action must be taken to improve the future of society and the state. This theme also runs parallel with the reasoning behind the forced sterilizations conducted post WWII in North Carolina. In 1994, the Peruvian President Alberto Fujimori commenced planning for his sterilization program, however this was met with strong resistance from Peru’s heavily Catholic culture. Despite resistance from his own people, from 1996 to 2000, the Fujimori government oversaw a massive forced sterilization campaign known as Voluntary Surgical Contraception. During this campaign at least 260,000 people, who were mostly women, were forced or threatened into sterilization surgery usually without a proper anesthetist (Lima). The United States also played a crucial role in the delivery of contraception to Peru by both Non-Governmental Organizations and Official U.S. Government Agencies (United). American Dr. Clarence J. Gamble invested considerable funds into smuggling contraceptives and Intrauterine Devices into the staunchly Catholic nation, in order to keep the country’s population low (Gamble). In 1966 the U.S. Agency for International Development funneled funds for Family Planning’ and population control into the third world country, resulting in an official and clear involvement by the United States Government (United States). Through Peru’s own government initiative and U.S. involvement to reduce population growth, there is clear aim at preventing people of a certain kind from reproducing. Peru provides an obvious example of U.S. encouragement of contraception in third world countries, under the pretense that it will help end poverty and improve future generations’ quality of life. However this zealous commitment to aiding the issues overseas raises the suspicion that family planning initiatives were born not out of ethical concern, but rather of the distress that inferior races are out-populating the superior one. This hidden motive in of itself provides further evidence of the universally embedded eugenicist agenda??”where nations are not only controlling population within their own borders, but even extending their reach into the lives of people they also deem inferior, with the consistent ambition to shape a better future.

Around the same time as the U.S. becomes involved in the Peruvian contraception initiative, further suggestion of the embedded eugenicist agenda by the United States appears in the unlikely medium of a cartoon. In 1967, Disney releases an educational animated short film starring the iconic Donald Duck, where a family of generic foreigners are gently told to stop having so many children (Family Planning). The film evades the mention of any specific forms of birth control, but rather focuses on the harsh consequences of a family having too many mouths to feed. Although subtle, the film’s message of deterrence from having children is clearly directed at minorities populations. The ethnic appearance of the family and references to using a hut and a plow are far from the average American experiences, and imply the message to be directed toward ethnic races. Yet another way in which eugenic practice is observed adapting in order to survive in the post WWII world is through eugenic organizations changing their names. After the defamation of eugenics as a dark pseudo-science, many eugenic organizations started to receive intense criticism of performed sterilizations and eugenic ideology. In order to escape criticism, many eugenic organizations changed their names and shifted thought, focusing energy on family planning and birth control methods rather than highly controversial sterilization. In 1984 the Human betterment league changed its name to the Human Genetics League, and around 1973 the American Eugenics Society became The Society for the Study of Social Biology (Messall). Henry Osborn, one of the founders of the American Eugenics Society references the change, saying:

“the name was changed because it became evident that changes of a eugenic nature would be made for reasons other than eugenics, and that tying a eugenic label on them would more often hinder than help their adoption. Birth control and abortion are turning out to be great eugenic advances of our time (Messall).

For these reasons, I believe that these name revisions and decentralized ideology is nothing more than coded rhetoric in order to distract from the deep-rooted, underlying, eugenic principles that continued to persist well beyond World War II.
In closing, eugenics did not disappear, but rather it adapted in order to survive. The two case studies in Peru and North Carolina showcase eugenics still being implemented in the post-World War II world. The main belief driving a support of eugenic practices is that ultimately it will create a better future for later generations of people. Although this rhetoric can craft the illusion of a virtuous argument, eugenic theory has been observed to actually lead people to act on their racist, classist, sexist, and other biased opinions to use against people they have subjectively deemed unfit. The consistent theme used to defend the violation of a person’s rights, such as forced or coerced sterilization was that it was for the ultimate good of the person, the state, and most importantly the wellbeing and improvement of future generations. Through the subtle undertones of a cartoon to the bold state-run sterilization initiatives, eugenics was still practiced through a variety of means after 1945, affecting the lives of thousands of people even today. Although World War II did not mark the end of eugenics, it did mark society’s growing disapproval and scientific discreditation of the practice, leading to its decline, not extinguishment.

The Profession of Nursing during World War II

Responsibilities of a Woman during World War II