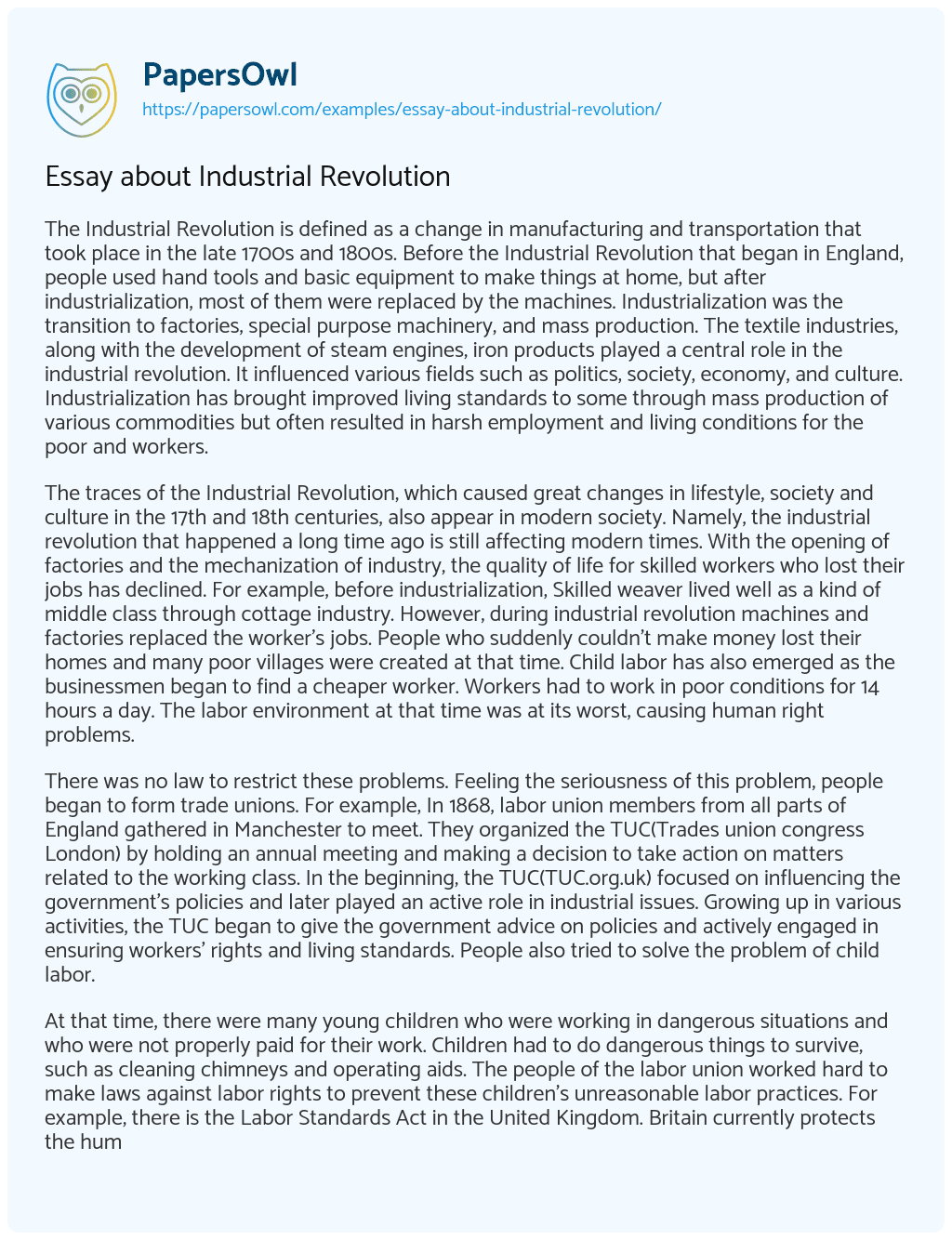 The Industrial Revolution is defined as a change in manufacturing and transportation that took place in the late 1700s and 1800s. Before the Industrial Revolution that began in England, people used hand tools and basic equipment to make things at home, but after industrialization, most of them were replaced by the machines. Industrialization was the transition to factories, special purpose machinery, and mass production. The textile industries, along with the development of steam engines, iron products played a central role in the industrial revolution. It influenced various fields such as politics, society, economy, and culture. Industrialization has brought improved living standards to some through mass production of various commodities but often resulted in harsh employment and living conditions for the poor and workers.

The traces of the Industrial Revolution, which caused great changes in lifestyle, society and culture in the 17th and 18th centuries, also appear in modern society. Namely, the industrial revolution that happened a long time ago is still affecting modern times. With the opening of factories and the mechanization of industry, the quality of life for skilled workers who lost their jobs has declined. For example, before industrialization, Skilled weaver lived well as a kind of middle class through cottage industry. However, during industrial revolution machines and factories replaced the worker’s jobs. People who suddenly couldn’t make money lost their homes and many poor villages were created at that time. Child labor has also emerged as the businessmen began to find a cheaper worker. Workers had to work in poor conditions for 14 hours a day. The labor environment at that time was at its worst, causing human right problems.

There was no law to restrict these problems. Feeling the seriousness of this problem, people began to form trade unions. For example, In 1868, labor union members from all parts of England gathered in Manchester to meet. They organized the TUC(Trades union congress London) by holding an annual meeting and making a decision to take action on matters related to the working class. In the beginning, the TUC(TUC.org.uk) focused on influencing the government’s policies and later played an active role in industrial issues. Growing up in various activities, the TUC began to give the government advice on policies and actively engaged in ensuring workers’ rights and living standards. People also tried to solve the problem of child labor.

At that time, there were many young children who were working in dangerous situations and who were not properly paid for their work. Children had to do dangerous things to survive, such as cleaning chimneys and operating aids. The people of the labor union worked hard to make laws against labor rights to prevent these children’s unreasonable labor practices. For example, there is the Labor Standards Act in the United Kingdom. Britain currently protects the human rights of children and workers by legally restricting the minimum wage by age, layoffs and employment and types of work. Urbanization is one of the enduring characteristics of the Industrial Revolution. Britain, for example, before industrialization 80 percent of its people lived in rural areas.

Although they mainly lived by farming and raising livestock, many people moved to industrialized cities because of the industrial and population growth caused by the agricultural revolution. The problems of housing, food, the environment, and etc began to emerge as people moved to cities in search of employment. Merchants, shipowners, and others have accumulated wealth as a ruling class, but workers have had to live a terrible life in the worst environment, earning a small wage(Charles A). As people flocked to the city, the class gap deepened, and housing problems arose due to the lack of houses to support many people. People also had a lot of problems with the lack of food to eat. Urbanization has also changed people’s lifestyles. The children were sent to the factory to make money and were exploited there.

Women’s lifestyles have also changed. They spent lots of time working as a worker in the textile industry and so on instead of home. During this period, the middle class emerged which benefited from prosperity. They have influenced the development of culture by enjoying theaters, sports facilities, and concerts in their spare time. In the 19th century, Britain experienced political instability, with industrialization and urbanization causing the need for social and political change. Demands for an abolition of slave trade, improvement of the electoral system, education, labor rights, political rights, and equality have emerged. As a result, the slave trade was abolished in 1807, and in 1832, the British Parliament of the Revolution passed the national assembly. After the reform, manufacturing-based cities like Manchester and Birmingham were able to be represented in Parliament for the first time, actively changing the nature of parliamentary politics. The conclusion shows that urbanization caused by industrialization has had a wide impact on politics, society, culture, law and human rights.