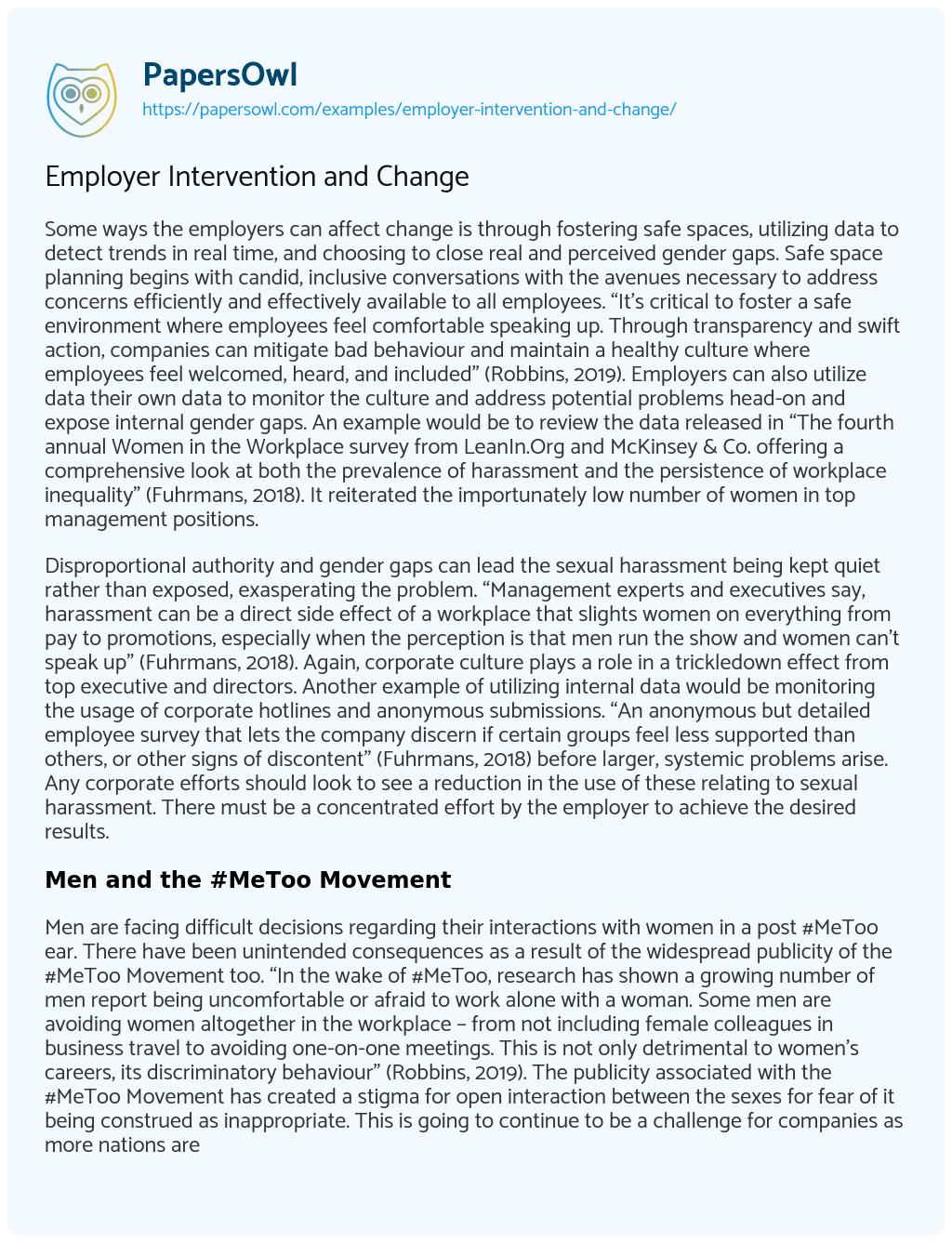 Some ways the employers can affect change is through fostering safe spaces, utilizing data to detect trends in real time, and choosing to close real and perceived gender gaps. Safe space planning begins with candid, inclusive conversations with the avenues necessary to address concerns efficiently and effectively available to all employees. “It’s critical to foster a safe environment where employees feel comfortable speaking up. Through transparency and swift action, companies can mitigate bad behaviour and maintain a healthy culture where employees feel welcomed, heard, and included” (Robbins, 2019). Employers can also utilize data their own data to monitor the culture and address potential problems head-on and expose internal gender gaps. An example would be to review the data released in “The fourth annual Women in the Workplace survey from LeanIn.Org and McKinsey & Co. offering a comprehensive look at both the prevalence of harassment and the persistence of workplace inequality” (Fuhrmans, 2018). It reiterated the importunately low number of women in top management positions.

Disproportional authority and gender gaps can lead the sexual harassment being kept quiet rather than exposed, exasperating the problem. “Management experts and executives say, harassment can be a direct side effect of a workplace that slights women on everything from pay to promotions, especially when the perception is that men run the show and women can’t speak up” (Fuhrmans, 2018). Again, corporate culture plays a role in a trickledown effect from top executive and directors. Another example of utilizing internal data would be monitoring the usage of corporate hotlines and anonymous submissions. “An anonymous but detailed employee survey that lets the company discern if certain groups feel less supported than others, or other signs of discontent” (Fuhrmans, 2018) before larger, systemic problems arise. Any corporate efforts should look to see a reduction in the use of these relating to sexual harassment. There must be a concentrated effort by the employer to achieve the desired results.

Men and the #MeToo Movement

Men are facing difficult decisions regarding their interactions with women in a post #MeToo ear. There have been unintended consequences as a result of the widespread publicity of the #MeToo Movement too. “In the wake of #MeToo, research has shown a growing number of men report being uncomfortable or afraid to work alone with a woman. Some men are avoiding women altogether in the workplace – from not including female colleagues in business travel to avoiding one-on-one meetings. This is not only detrimental to women’s careers, its discriminatory behaviour” (Robbins, 2019). The publicity associated with the #MeToo Movement has created a stigma for open interaction between the sexes for fear of it being construed as inappropriate. This is going to continue to be a challenge for companies as more nations are opening their businesses to international commence and interaction. Men are faced with an unfamiliar landscape regarding their interactions with women in business settings. However, transparency and open dialogue with trained Human Resources professionals can help alleviate some of the concerns.

The International Labour Organization (ILO) has been actively involved in finding a global solution to the issues exposed by the #MeToo Movement. “The International Labour Conference (ILC) recently held negotiations over proposed global standards that employers should follow to prevent and remedy workplace violence and harassment” (Smith, 2018). This could be extremely and immediately impactful because “many countries ratify U.N. conventions and then conform their national laws to the conventions, particularly in Latin America, adopt the convention text, as written, directly into their national laws”” (Smith, 2018). To understand how impactful this could be we need to consider The World Bank’s “Women, Business and the Law 2018” Report. It “found that 59 out of 189 countries whose economies were studied had no specific legal provisions covering sexual harassment in employment. More broadly, the ILO has noted that there are many gaps in legal protections relating to violence and harassment in the workplace. They include a lack of coherent laws, a lack of coverage in laws and policies for workers most exposed to violence, and an overly narrow definition of “workplace” in existing laws and regulations” (HumanRightsWatch.Org, 2018). The proposed global law to prevent and remedy workplace violence and harassment would give the consistency desperately needed the various countries.

The #MeToo Movement is a complex issue and is continuing to evolve around the world. It “has galvanized legislators, workers, consumers, and shareholders to take matters into their own hands” (Thomas, 2018). Movement supporters have done this through the power of social media, mainstream media, and boardroom pressures on corporate change. Google’s ‘Me Too Rising, a visualization of the movement from Google Trends’ at https://metoorising.withgoogle.com/ beautifully displays the connection of global business and movement support. “In sectors or parts of the world where the #MeToo revelations were not being amplified, it was clear this was because of a fear of the consequences of speaking out about harassment, rather than the absence of it” (Pankhurst, 2018). The gender imbalance causes varying degrees of success regarding changes in the workplace throughout the world. In response, the #MeToo Movement needs to maintain its focus on corporate culture and unaccounted gender gaps in the workplace.”