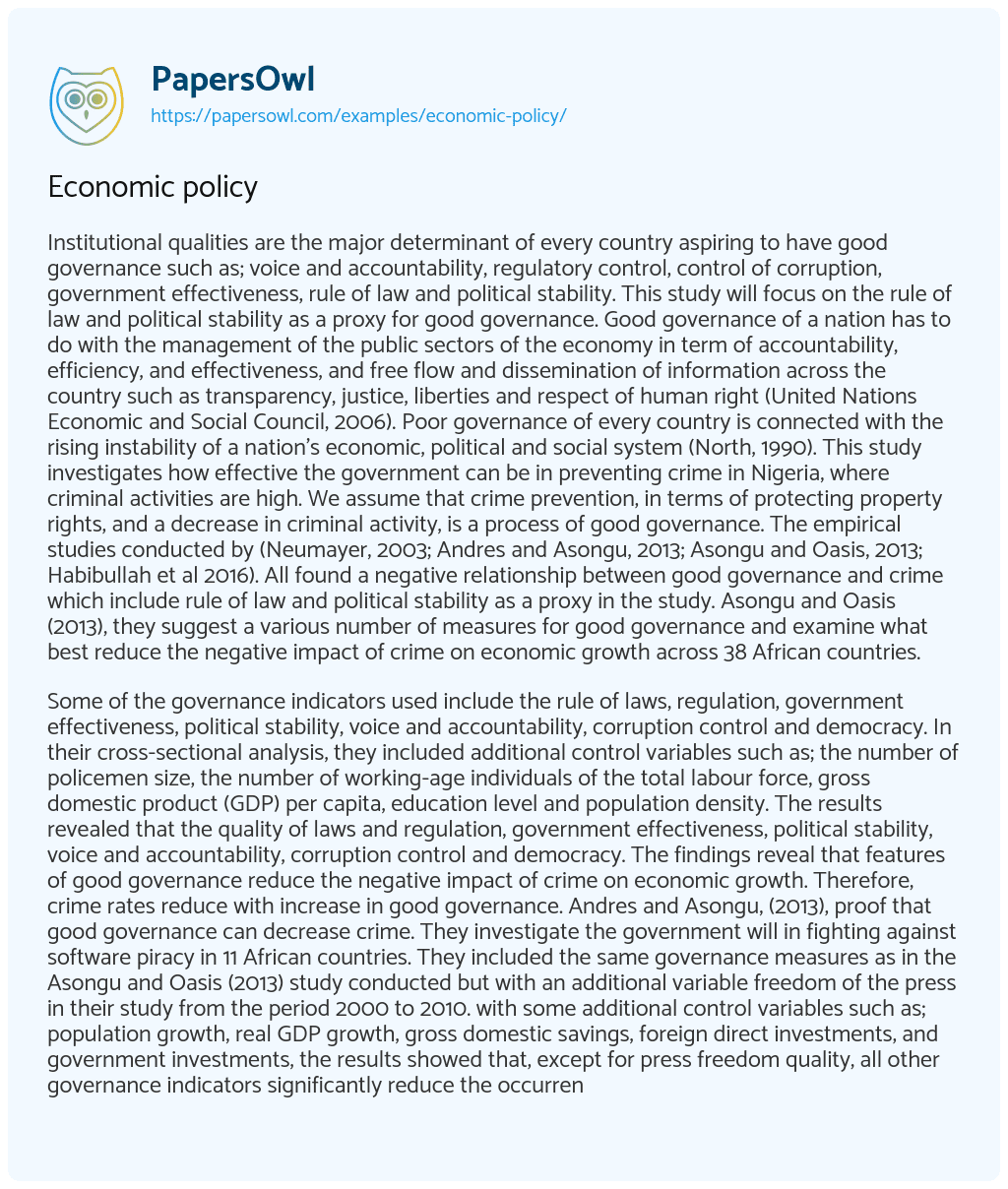 Institutional qualities are the major determinant of every country aspiring to have good governance such as; voice and accountability, regulatory control, control of corruption, government effectiveness, rule of law and political stability. This study will focus on the rule of law and political stability as a proxy for good governance. Good governance of a nation has to do with the management of the public sectors of the economy in term of accountability, efficiency, and effectiveness, and free flow and dissemination of information across the country such as transparency, justice, liberties and respect of human right (United Nations Economic and Social Council, 2006). Poor governance of every country is connected with the rising instability of a nation’s economic, political and social system (North, 1990). This study investigates how effective the government can be in preventing crime in Nigeria, where criminal activities are high. We assume that crime prevention, in terms of protecting property rights, and a decrease in criminal activity, is a process of good governance. The empirical studies conducted by (Neumayer, 2003; Andres and Asongu, 2013; Asongu and Oasis, 2013; Habibullah et al 2016). All found a negative relationship between good governance and crime which include rule of law and political stability as a proxy in the study. Asongu and Oasis (2013), they suggest a various number of measures for good governance and examine what best reduce the negative impact of crime on economic growth across 38 African countries.

Some of the governance indicators used include the rule of laws, regulation, government effectiveness, political stability, voice and accountability, corruption control and democracy. In their cross-sectional analysis, they included additional control variables such as; the number of policemen size, the number of working-age individuals of the total labour force, gross domestic product (GDP) per capita, education level and population density. The results revealed that the quality of laws and regulation, government effectiveness, political stability, voice and accountability, corruption control and democracy. The findings reveal that features of good governance reduce the negative impact of crime on economic growth. Therefore, crime rates reduce with increase in good governance. Andres and Asongu, (2013), proof that good governance can decrease crime. They investigate the government will in fighting against software piracy in 11 African countries. They included the same governance measures as in the Asongu and Oasis (2013) study conducted but with an additional variable freedom of the press in their study from the period 2000 to 2010. with some additional control variables such as; population growth, real GDP growth, gross domestic savings, foreign direct investments, and government investments, the results showed that, except for press freedom quality, all other governance indicators significantly reduce the occurrence of software piracy.

Neumayer (2003), conducted a study to examine whether good political governance and good economic policies decrease the rates of homicide in 117 countries. Measures of the good political atmosphere which included democracy, respect for human rights and the absence of the death penalty. Indicators for good economic policies made up welfare expenditures, economic discrimination of fewer privilege individuals and income inequality. The results showed that the abolition of the death penalty, human rights, and democracy reduce the rates of homicide. In a study conducted by Habibullah et al, (2016), they utilized the ARDL model approach to test the long-run cointegration of good governance and crime rates in Malaysia for the period of 1996-2009. The findings reveal that good governance reduce crime rates (both violent and property crime) which have a negative relationship between crime rates and good governance in Malaysia For the purpose of this study, we used two measures of governance as indicators of good governance determined by the World Bank (in Kaufman et al., 2008). Some of these are found to be by the above-mentioned studies (rule of law and political stability as a proxy).

Brexit and the Potential Economic Impacts

Impact of Foreign Direct Investment on Economic Growth in Afghanistan