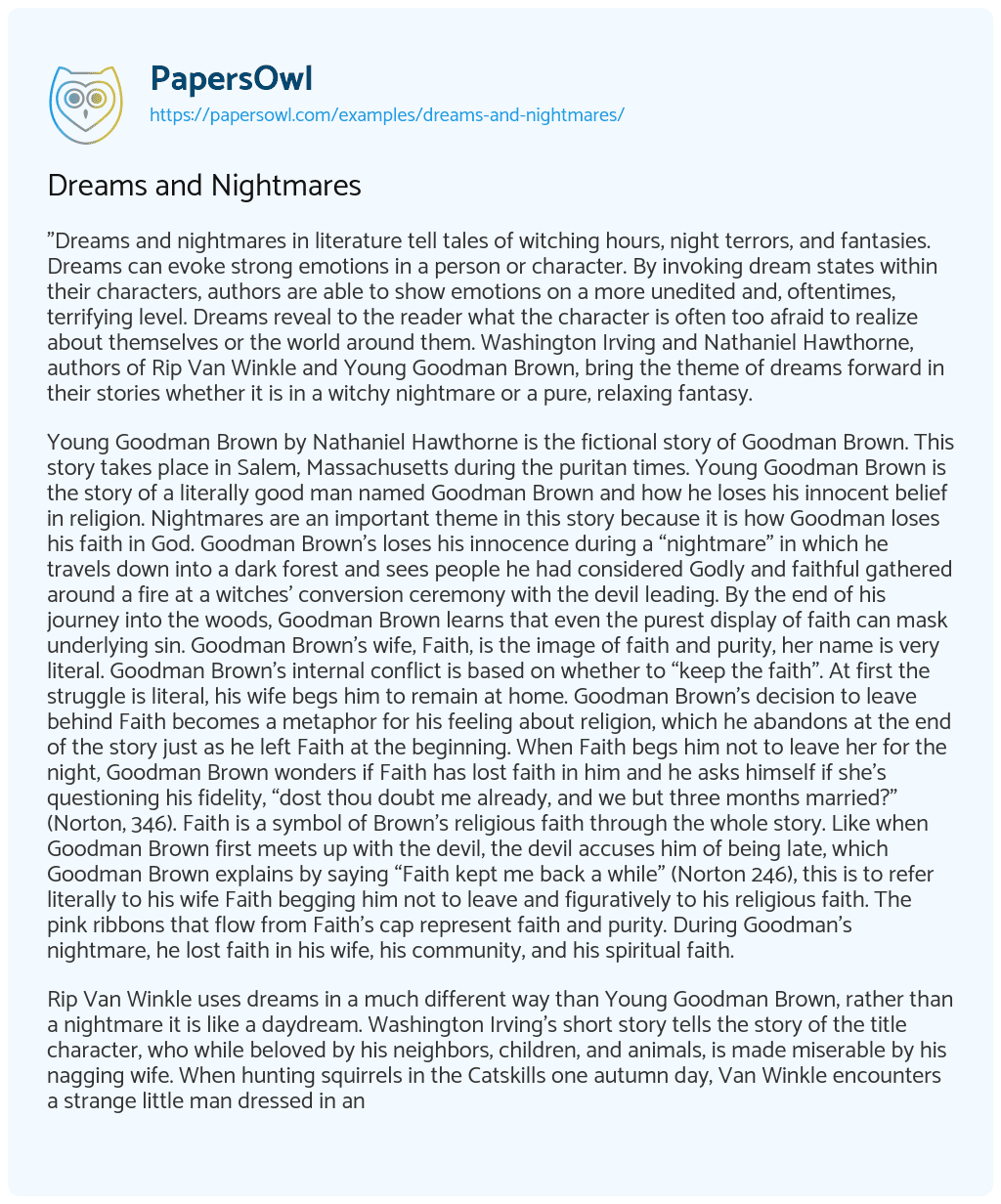 “Dreams and nightmares in literature tell tales of witching hours, night terrors, and fantasies. Dreams can evoke strong emotions in a person or character. By invoking dream states within their characters, authors are able to show emotions on a more unedited and, oftentimes, terrifying level. Dreams reveal to the reader what the character is often too afraid to realize about themselves or the world around them. Washington Irving and Nathaniel Hawthorne, authors of Rip Van Winkle and Young Goodman Brown, bring the theme of dreams forward in their stories whether it is in a witchy nightmare or a pure, relaxing fantasy.

Young Goodman Brown by Nathaniel Hawthorne is the fictional story of Goodman Brown. This story takes place in Salem, Massachusetts during the puritan times. Young Goodman Brown is the story of a literally good man named Goodman Brown and how he loses his innocent belief in religion. Nightmares are an important theme in this story because it is how Goodman loses his faith in God. Goodman Brown’s loses his innocence during a “nightmare” in which he travels down into a dark forest and sees people he had considered Godly and faithful gathered around a fire at a witches’ conversion ceremony with the devil leading. By the end of his journey into the woods, Goodman Brown learns that even the purest display of faith can mask underlying sin. Goodman Brown’s wife, Faith, is the image of faith and purity, her name is very literal. Goodman Brown’s internal conflict is based on whether to “keep the faith”. At first the struggle is literal, his wife begs him to remain at home. Goodman Brown’s decision to leave behind Faith becomes a metaphor for his feeling about religion, which he abandons at the end of the story just as he left Faith at the beginning. When Faith begs him not to leave her for the night, Goodman Brown wonders if Faith has lost faith in him and he asks himself if she’s questioning his fidelity, “dost thou doubt me already, and we but three months married?” (Norton, 346). Faith is a symbol of Brown’s religious faith through the whole story. Like when Goodman Brown first meets up with the devil, the devil accuses him of being late, which Goodman Brown explains by saying “Faith kept me back a while” (Norton 246), this is to refer literally to his wife Faith begging him not to leave and figuratively to his religious faith. The pink ribbons that flow from Faith’s cap represent faith and purity. During Goodman’s nightmare, he lost faith in his wife, his community, and his spiritual faith.

Rip Van Winkle uses dreams in a much different way than Young Goodman Brown, rather than a nightmare it is like a daydream. Washington Irving’s short story tells the story of the title character, who while beloved by his neighbors, children, and animals, is made miserable by his nagging wife. When hunting squirrels in the Catskills one autumn day, Van Winkle encounters a strange little man dressed in antique Dutch clothes “His dress was of the antique Dutch fashion-” (Norton, 34). Van Winkle finds him strange but a force makes him assist in carrying a keg up the mountain. There he sees a group of similarly attired little men. He then takes a few sips from their keg and falls asleep. When he awakens, he discovers that he has slept for 20 years, that his wife is dead, his children are grown, and that the world has changed around him. Rip slept while his world utterly changed. When Rip wakes up from this slumber, he goes on life as it was before but now he has stories of magic and no nagging wife to bother him. “Rip Van Winkle, however, was one of those happy mortals, of foolish, well-oiled dispositions, who take the world easy, eat white bread or brown, whichever can be got with least thought or trouble, and would rather starve on a penny than work for a pound” (Norton, 32). Before, Rip spent all of his time seeking tranquility and seeking to not do any labor. His dream was to be away from his wife, not working, and being relaxed. Because of this, one could argue that the “20 years after” portion of this story could be Rip’s own dream. Rip lived his fantasy after he woke up, he had no wife to worry about, he lived with his children, and he was able to tell the tales in the local Inn.

In Young Goodman Brown by Nathaniel Hawthorne and Rip Van Winkle by Washington Irving are very different stories but they bother center around the fantasy state of dream. Young Goodman Brown was centered around a nightmare and the terrors of the night while Rip Van Winkle explores more of a daydream like state. The authors used dreams to explore unearthly and unrealistic circumstances that happened to their characters. Dreams can reveal many things about the character that they are unable to see themselves, like when Goodman Brown starts falling far from his faith. Washington Irving and Nathaniel Hawthorne bring the theme of dreams forward in their stories whether it is in a witchy nightmare or a pure, relaxing fantasy.”