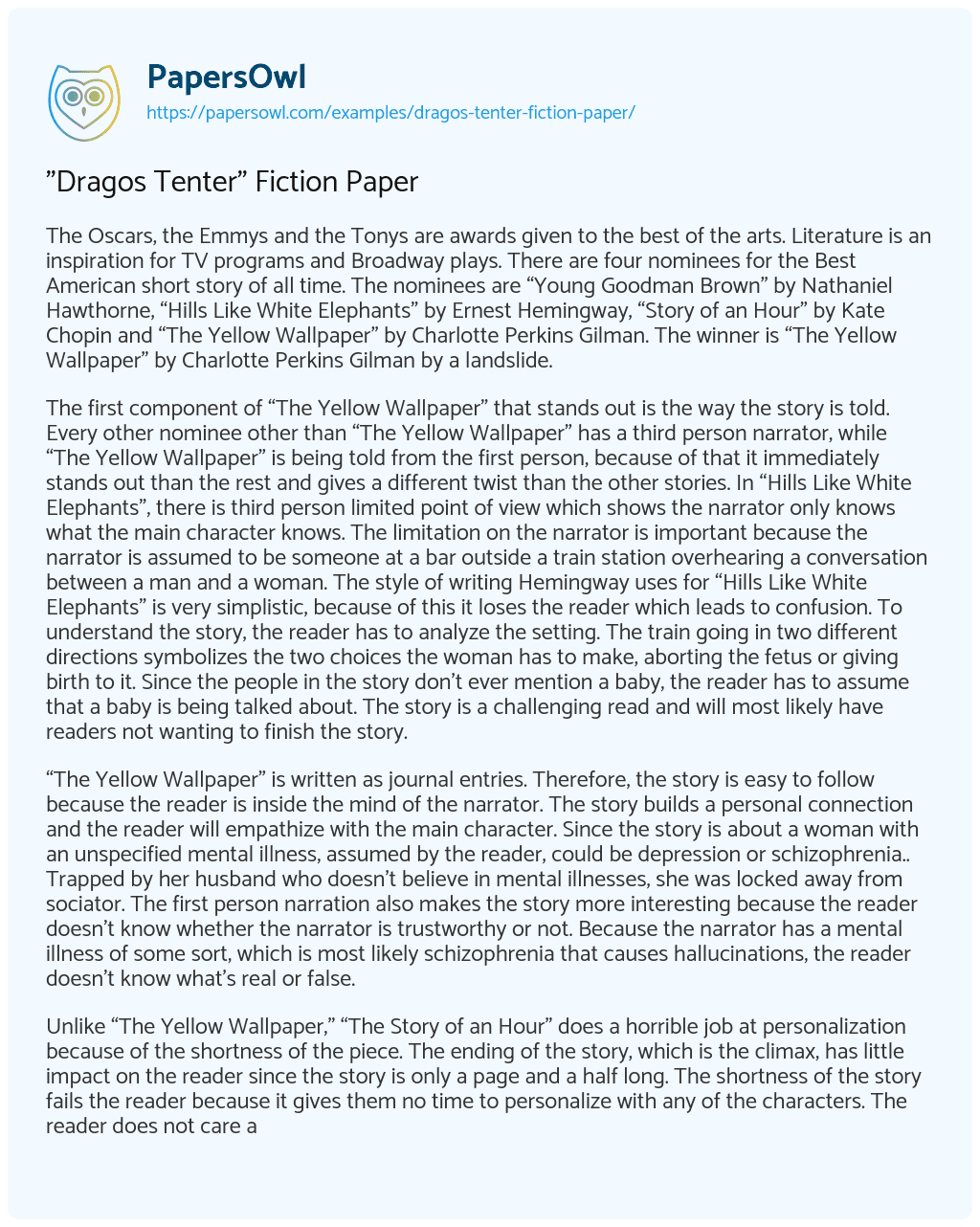 The Oscars, the Emmys and the Tonys are awards given to the best of the arts. Literature is an inspiration for TV programs and Broadway plays. There are four nominees for the Best American short story of all time. The nominees are “Young Goodman Brown” by Nathaniel Hawthorne, “Hills Like White Elephants” by Ernest Hemingway, “Story of an Hour” by Kate Chopin and “The Yellow Wallpaper” by Charlotte Perkins Gilman. The winner is “The Yellow Wallpaper” by Charlotte Perkins Gilman by a landslide.

The first component of “The Yellow Wallpaper” that stands out is the way the story is told. Every other nominee other than “The Yellow Wallpaper” has a third person narrator, while “The Yellow Wallpaper” is being told from the first person, because of that it immediately stands out than the rest and gives a different twist than the other stories. In “Hills Like White Elephants”, there is third person limited point of view which shows the narrator only knows what the main character knows. The limitation on the narrator is important because the narrator is assumed to be someone at a bar outside a train station overhearing a conversation between a man and a woman. The style of writing Hemingway uses for “Hills Like White Elephants” is very simplistic, because of this it loses the reader which leads to confusion. To understand the story, the reader has to analyze the setting. The train going in two different directions symbolizes the two choices the woman has to make, aborting the fetus or giving birth to it. Since the people in the story don’t ever mention a baby, the reader has to assume that a baby is being talked about. The story is a challenging read and will most likely have readers not wanting to finish the story.

“The Yellow Wallpaper” is written as journal entries. Therefore, the story is easy to follow because the reader is inside the mind of the narrator. The story builds a personal connection and the reader will empathize with the main character. Since the story is about a woman with an unspecified mental illness, assumed by the reader, could be depression or schizophrenia.. Trapped by her husband who doesn’t believe in mental illnesses, she was locked away from sociator. The first person narration also makes the story more interesting because the reader doesn’t know whether the narrator is trustworthy or not. Because the narrator has a mental illness of some sort, which is most likely schizophrenia that causes hallucinations, the reader doesn’t know what’s real or false.

Unlike “The Yellow Wallpaper,” “The Story of an Hour” does a horrible job at personalization because of the shortness of the piece. The ending of the story, which is the climax, has little impact on the reader since the story is only a page and a half long. The shortness of the story fails the reader because it gives them no time to personalize with any of the characters. The reader does not care about what happens to Mrs. Mallard or whether she’s free or not, because the reader has no character background information. Basically, the story lacks a reader and author connection, so it is not impactful enough.

An example of a story that did the exact opposite is “Young Goodman Brown”. The story is around fourteen pages long, mostly filled with detailed descriptions of the setting, the people he “sees”, and his actions. The story is confusing because the reader is not told directly whether the things Brown sees is real or not. To the reader trying to understand the message of the story, it seems like the story composed of fillers. The story is filled with unnecessary descriptions that distracts the reader from the internal conflict that Goodman Brown is having during the story. The story has an interesting idea but executed poorly. The theme of good versus evil can be written better, but the concept is fascinating. Goodman Brown is a confused fellow and is indecisive which can make the character unlikable and the reader may find him irritable.

The way “The Yellow Wallpaper” is told, is unique and stands out from the rest. It helps that it’s a short read, but not too short of a read like “Story of an Hour”. It gives the readers a good amount of time to get a feel for the characters, especially the narrator since the reader is inside her mind while reading, and the medium length of the story still takes place throughout weeks because the author used journal entries as a method of skipping time. Every time a new journal entry starts, it feels like days has passed by. The journalistic style of writing was clever for this story because the reader sees and feels what the narrator sees and feels. The story becomes an empathetic journey of entrapment, depression, weakness, uselessness, madness, hopelessness and despair, while still being skeptical of the narrator. While the narrator is describing the yellow color of the wallpaper in the room, I picture it on my wall, and imagine tearing it off with feelings of fulfillment.

Ultimately, “The Yellow Wallpaper” by Charlotte Perkins Gilman stands out as the most notable American short story out of the four nominees due to its pathos appeal because of its first person narration, its personalization through the journalistic style of writing and the balanced length of the story overall ties every technique together without dragging the story along while losing the attention of the readers or being too short, leading to a lack of care for the narrator.”

Psychological and Physical Well-being of Women in the XIX Century