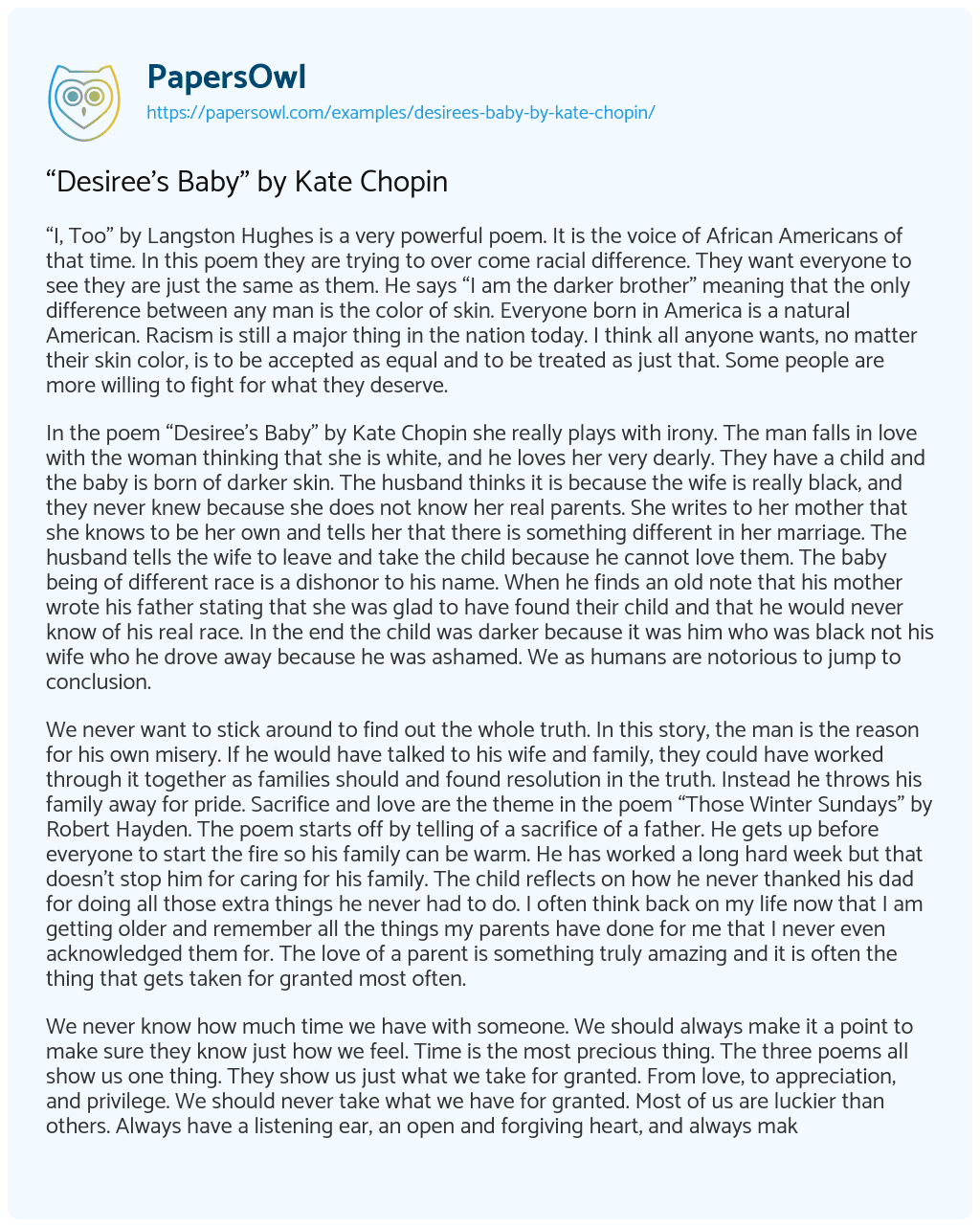 “I, Too” by Langston Hughes is a very powerful poem. It is the voice of African Americans of that time. In this poem they are trying to over come racial difference. They want everyone to see they are just the same as them. He says “I am the darker brother” meaning that the only difference between any man is the color of skin. Everyone born in America is a natural American. Racism is still a major thing in the nation today. I think all anyone wants, no matter their skin color, is to be accepted as equal and to be treated as just that. Some people are more willing to fight for what they deserve.

In the poem “Desiree’s Baby” by Kate Chopin she really plays with irony. The man falls in love with the woman thinking that she is white, and he loves her very dearly. They have a child and the baby is born of darker skin. The husband thinks it is because the wife is really black, and they never knew because she does not know her real parents. She writes to her mother that she knows to be her own and tells her that there is something different in her marriage. The husband tells the wife to leave and take the child because he cannot love them. The baby being of different race is a dishonor to his name. When he finds an old note that his mother wrote his father stating that she was glad to have found their child and that he would never know of his real race. In the end the child was darker because it was him who was black not his wife who he drove away because he was ashamed. We as humans are notorious to jump to conclusion.

We never want to stick around to find out the whole truth. In this story, the man is the reason for his own misery. If he would have talked to his wife and family, they could have worked through it together as families should and found resolution in the truth. Instead he throws his family away for pride. Sacrifice and love are the theme in the poem “Those Winter Sundays” by Robert Hayden. The poem starts off by telling of a sacrifice of a father. He gets up before everyone to start the fire so his family can be warm. He has worked a long hard week but that doesn’t stop him for caring for his family. The child reflects on how he never thanked his dad for doing all those extra things he never had to do. I often think back on my life now that I am getting older and remember all the things my parents have done for me that I never even acknowledged them for. The love of a parent is something truly amazing and it is often the thing that gets taken for granted most often.

We never know how much time we have with someone. We should always make it a point to make sure they know just how we feel. Time is the most precious thing. The three poems all show us one thing. They show us just what we take for granted. From love, to appreciation, and privilege. We should never take what we have for granted. Most of us are luckier than others. Always have a listening ear, an open and forgiving heart, and always make your feelings known. We truly never know what you have until its gone.

The Awakening by Kate Chopin