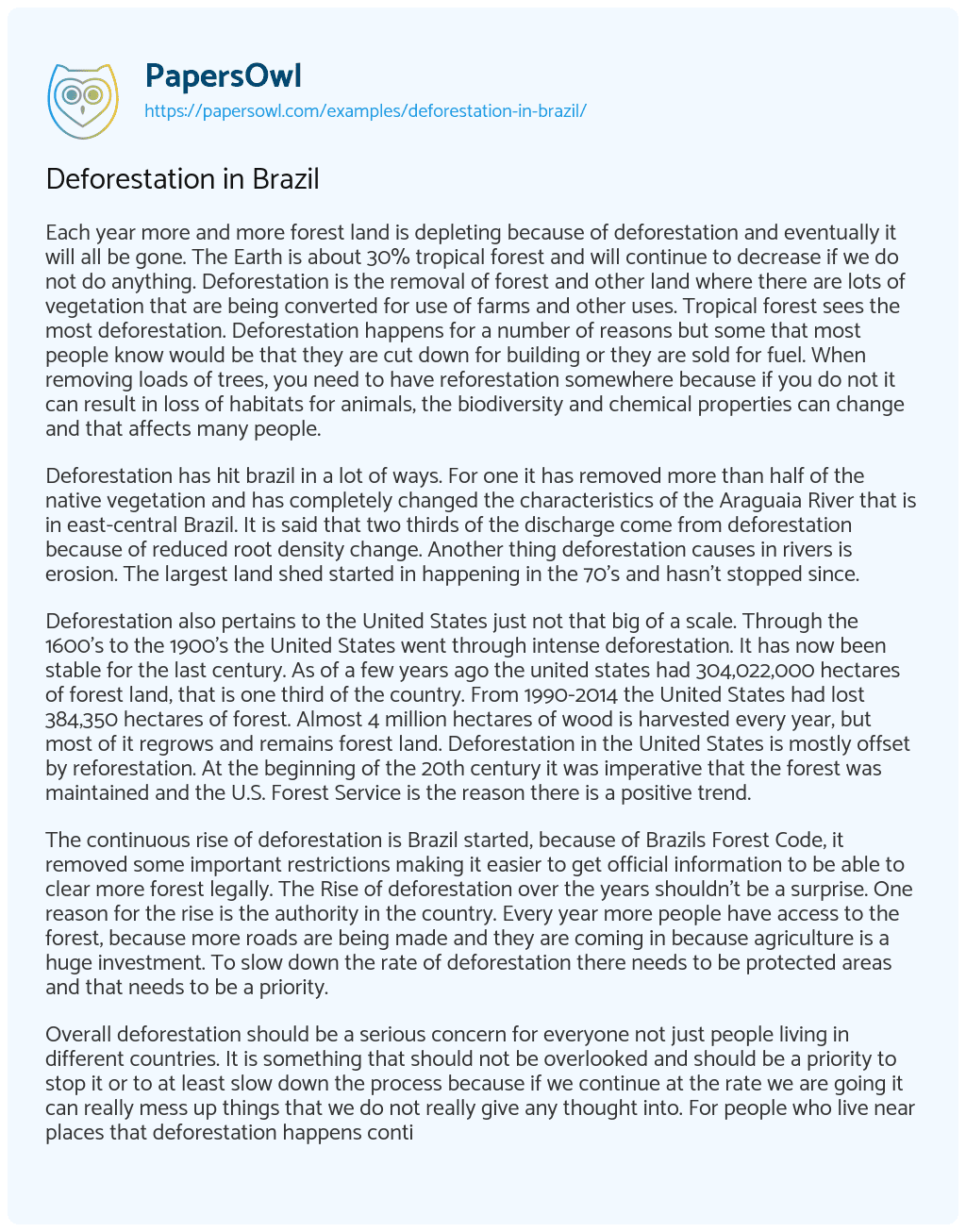 Each year more and more forest land is depleting because of deforestation and eventually it will all be gone. The Earth is about 30% tropical forest and will continue to decrease if we do not do anything. Deforestation is the removal of forest and other land where there are lots of vegetation that are being converted for use of farms and other uses. Tropical forest sees the most deforestation. Deforestation happens for a number of reasons but some that most people know would be that they are cut down for building or they are sold for fuel. When removing loads of trees, you need to have reforestation somewhere because if you do not it can result in loss of habitats for animals, the biodiversity and chemical properties can change and that affects many people.

Deforestation has hit brazil in a lot of ways. For one it has removed more than half of the native vegetation and has completely changed the characteristics of the Araguaia River that is in east-central Brazil. It is said that two thirds of the discharge come from deforestation because of reduced root density change. Another thing deforestation causes in rivers is erosion. The largest land shed started in happening in the 70’s and hasn’t stopped since.

The continuous rise of deforestation is Brazil started, because of Brazils Forest Code, it removed some important restrictions making it easier to get official information to be able to clear more forest legally. The Rise of deforestation over the years shouldn’t be a surprise. One reason for the rise is the authority in the country. Every year more people have access to the forest, because more roads are being made and they are coming in because agriculture is a huge investment. To slow down the rate of deforestation there needs to be protected areas and that needs to be a priority.

Overall deforestation should be a serious concern for everyone not just people living in different countries. It is something that should not be overlooked and should be a priority to stop it or to at least slow down the process because if we continue at the rate we are going it can really mess up things that we do not really give any thought into. For people who live near places that deforestation happens continuously they should look into ways they can help even if it is a small, anything can help as long as the rate of deforestation slows down and our forest and animals that live in It do not disappear.

Deforestation and the Economy