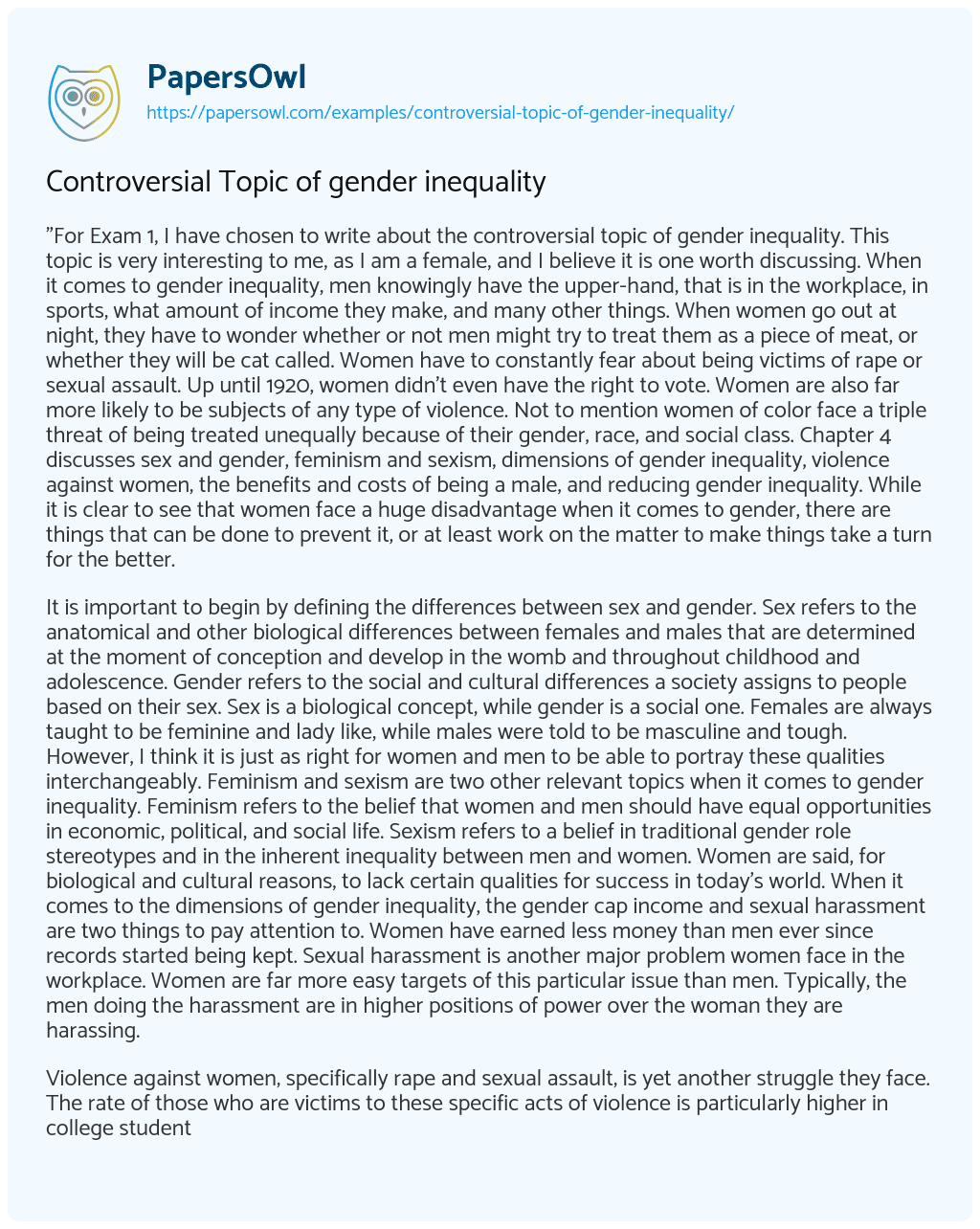 “For Exam 1, I have chosen to write about the controversial topic of gender inequality. This topic is very interesting to me, as I am a female, and I believe it is one worth discussing. When it comes to gender inequality, men knowingly have the upper-hand, that is in the workplace, in sports, what amount of income they make, and many other things. When women go out at night, they have to wonder whether or not men might try to treat them as a piece of meat, or whether they will be cat called. Women have to constantly fear about being victims of rape or sexual assault. Up until 1920, women didn’t even have the right to vote. Women are also far more likely to be subjects of any type of violence. Not to mention women of color face a triple threat of being treated unequally because of their gender, race, and social class. Chapter 4 discusses sex and gender, feminism and sexism, dimensions of gender inequality, violence against women, the benefits and costs of being a male, and reducing gender inequality. While it is clear to see that women face a huge disadvantage when it comes to gender, there are things that can be done to prevent it, or at least work on the matter to make things take a turn for the better.

It is important to begin by defining the differences between sex and gender. Sex refers to the anatomical and other biological differences between females and males that are determined at the moment of conception and develop in the womb and throughout childhood and adolescence. Gender refers to the social and cultural differences a society assigns to people based on their sex. Sex is a biological concept, while gender is a social one. Females are always taught to be feminine and lady like, while males were told to be masculine and tough. However, I think it is just as right for women and men to be able to portray these qualities interchangeably. Feminism and sexism are two other relevant topics when it comes to gender inequality. Feminism refers to the belief that women and men should have equal opportunities in economic, political, and social life. Sexism refers to a belief in traditional gender role stereotypes and in the inherent inequality between men and women. Women are said, for biological and cultural reasons, to lack certain qualities for success in today’s world. When it comes to the dimensions of gender inequality, the gender cap income and sexual harassment are two things to pay attention to. Women have earned less money than men ever since records started being kept. Sexual harassment is another major problem women face in the workplace. Women are far more easy targets of this particular issue than men. Typically, the men doing the harassment are in higher positions of power over the woman they are harassing.

Violence against women, specifically rape and sexual assault, is yet another struggle they face. The rate of those who are victims to these specific acts of violence is particularly higher in college students. This percentage is about 20-30, or 10 per week in a four-year academic calendar. That is a very disturbing thought, if you ask me. Some sociological explanations for rape indicate that it may have been something the particular woman “wanted.” Another cultural belief is that they were “asking for it”, or “deserved it,” because of what they wore and how they presented themselves. This is absolutely absurd and doesn’t justify any act of sexual violence towards women. On the other hand, being a male comes with quite a few benefits such as: walking anywhere they want without fear of being sexually harassed, wearing whatever they want, not having to worry about being groped, applying for most jobs without fear of rejection because of their gender, and the list goes on. Some costs men deal with are always feeling like they have to maintain strong, tough, and masculine. This can lead to a repression of emotions and have negative outcomes. Lastly it is important to talk about the things that can be done to reduce gender inequality. Such things consist of: reducing socialization by parents and other adults of girls and boys into traditional gender roles, confronting gender stereotyping by the news media, increasing public consciousness of the reasons for, extent of, and consequences of rape and sexual assault, harassment, and pornography, increasing enforcement of existing laws, increasing funding of rape-crisis centers, increasing government funding of high-quality day-care options, and increasing mentorship and other efforts to boost the number of women in traditionally male occupations and in positions of political leadership.

When trying to better understand the topic of gender inequality, it is helpful to notice the sociological analysis of such a controversial thing. These controversial topics may come up here and there in the news and media, however it is only in a sociological context that you will see things dive deeper and go beyond surface level. Sociological analysis sheds light on gender inequality and really allows people to fully understand why it is such a problem. Movies, shows, news, media, and whatever else we may see definitely doesn’t portray gender inequality to its full extent. They will only show what they know people want to see. On the contrary, I think an important aspect that sociological analysis’ tend to lack on is how women are over all treated inferior to men, and that it is an actual serious issue. How did all these things, discussed above, even come about in the first place? Who decided men would receive all these advantages over women? How is it psychologically fair that women have to deal with consequences of rape or the fear of it? There are many things that can still be studied about this topic, but I believe women are only getting stronger and better as the years progress. I like to believe that one day, in the near future, women and men will be treated equally in every single aspect.”