Climate Change and the Spread of Zika Virus 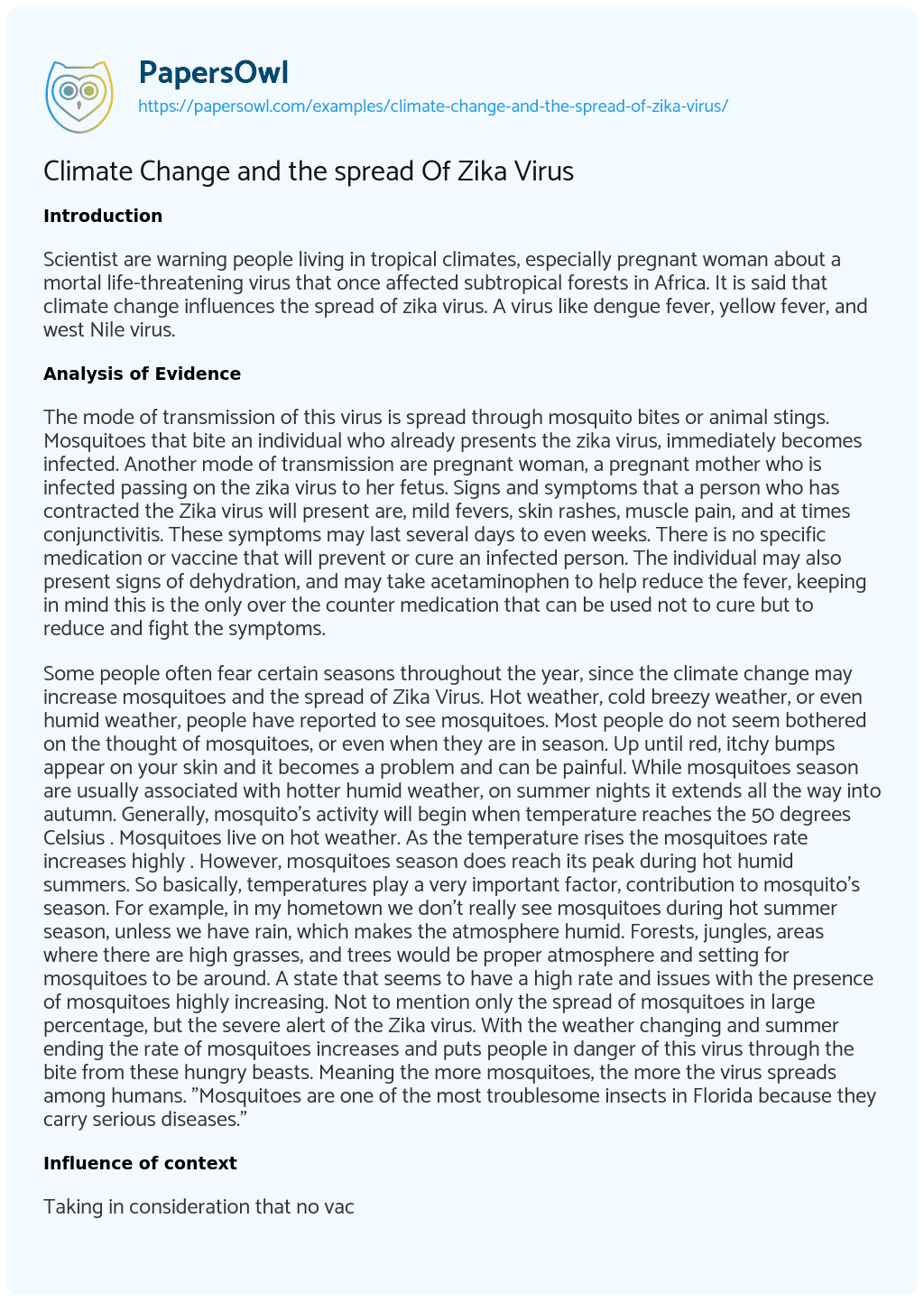 Scientist are warning people living in tropical climates, especially pregnant woman about a mortal life-threatening virus that once affected subtropical forests in Africa. It is said that climate change influences the spread of zika virus. A virus like dengue fever, yellow fever, and west Nile virus.

The mode of transmission of this virus is spread through mosquito bites or animal stings. Mosquitoes that bite an individual who already presents the zika virus, immediately becomes infected. Another mode of transmission are pregnant woman, a pregnant mother who is infected passing on the zika virus to her fetus. Signs and symptoms that a person who has contracted the Zika virus will present are, mild fevers, skin rashes, muscle pain, and at times conjunctivitis. These symptoms may last several days to even weeks. There is no specific medication or vaccine that will prevent or cure an infected person. The individual may also present signs of dehydration, and may take acetaminophen to help reduce the fever, keeping in mind this is the only over the counter medication that can be used not to cure but to reduce and fight the symptoms.

Some people often fear certain seasons throughout the year, since the climate change may increase mosquitoes and the spread of Zika Virus. Hot weather, cold breezy weather, or even humid weather, people have reported to see mosquitoes. Most people do not seem bothered on the thought of mosquitoes, or even when they are in season. Up until red, itchy bumps appear on your skin and it becomes a problem and can be painful. While mosquitoes season are usually associated with hotter humid weather, on summer nights it extends all the way into autumn. Generally, mosquito’s activity will begin when temperature reaches the 50 degrees Celsius . Mosquitoes live on hot weather. As the temperature rises the mosquitoes rate increases highly . However, mosquitoes season does reach its peak during hot humid summers. So basically, temperatures play a very important factor, contribution to mosquito’s season. For example, in my hometown we don’t really see mosquitoes during hot summer season, unless we have rain, which makes the atmosphere humid. Forests, jungles, areas where there are high grasses, and trees would be proper atmosphere and setting for mosquitoes to be around. A state that seems to have a high rate and issues with the presence of mosquitoes highly increasing. Not to mention only the spread of mosquitoes in large percentage, but the severe alert of the Zika virus. With the weather changing and summer ending the rate of mosquitoes increases and puts people in danger of this virus through the bite from these hungry beasts. Meaning the more mosquitoes, the more the virus spreads among humans. “Mosquitoes are one of the most troublesome insects in Florida because they carry serious diseases.”

Taking in consideration that no vaccine has been invented to prevent the Zika virus other methods to prevent mosquito bites have been invented. Here are some recommendations I suggest utilizing Picking the right mosquitoes repellent, OFF for example is one that people highly recommend for being so efficient and good. Applying it the correct way, avoiding spraying on cuts or wounds. Do not wear repellent under your clothes it will not be efficient due to the fabric material absorbing all the chemical. For example, if you know you are going to a setting where you know there might me bugs and mosquitoes avoid using shorts, short sleeves and make sure you also spray repellent above your clothes, that will keep them away. Avoiding showing too much visible skin will save you from a bite. Getting your home clean and ready staying in conditioned areas, use misquote repellent candles. Eliminating standing water throughout your home plants, bottles and accumulating garbage inside household and like I mentioned before travelling smart. Let’s say you plan a camping trip and you know that the camping site is under multiple trees and the weather is proper for mosquitoes to be around, utilizing all the methods that we discussed along with bug lights, will reduce the red bumpy itchy bites and the spread of a non-treatable virus such as the Zika virus.

“Areas with risk of Zika outside the united states. based on laboratory analysis and mathematical modeling a conservative yet plausible estimate for introduction of the Zika virus and substantive risk of exposure in North America, South America and the Caribbean is January 1, 2014”

The way the Zika virus is diagnosed is obviously going to a medical professional and presenting signs and symptoms. Sex is another mode of transmission that affects a person who has the virus and infects their partner A blood or urine analysis may indicate if you are infected with the virus. A person with Zika can transmit the virus to his or her partner through vaginal sex, anal sex, and likely oral sex. Zika has been detected in semen, vaginal fluids, urine, and breast milk. There is no evidence at present that Zika can be transmitted through saliva during deep kissing. But on males it is presented to be passed and stored in the sperm, Ways to prevent this virus from spreading sexually would be wearing condoms from start to finish, avoid oral sex with infected partner, or coming in contact any genital discharge. “As of July 20, 2016, 15 cases of Zika virus infection transmitted by sexual contact had been reported in the United States”. Prevention can totally be done and stopping not only the red itchy bumps and bites but also this harmful virus.

Taking note of the treatments that can be taken place if you are ever in a situation where you do get infected by the virus and you feel like not much can be done, don’t worry you can seek medical help or self-treat and fight just the symptoms but keep in mind no vaccine has been developed to fight this deadly virus. Also keeping in mind that the weather changes plays a major role on the spread of these mosquitoes both cold and hot weathers may trigger the appearance of mosquitoes. In each case, the virus to blame had not previously been reported in the affected area. Extreme or shifting weather patterns helped expand the habitat of the mosquitoes that can carry those illnesses? and experts say that outbreaks are bound to become more common as the effects of climate change become more prevalent.

“A longer warm-weather season and changing rainfall patterns are allowing the insects that can transmit disease to humans to thrive for longer periods each year? and to simultaneously move into broader areas,” explains Kim Knowlton, senior scientist and deputy director of NRDC’s Science Center.

Now that we know that climate does have to do with the rate of mosquitoes going up we will totally be smart and watch for any signs of temperatures decreases and changes.

Knowing when to distinguish the symptoms and what to do is very important we discussed signs and symptoms, and when to seek immediate medical help. Being aware of your surroundings, like camping areas, creeks, parks, anywhere where you know there might be an attraction to mosquitoes avoid them. If so, make sure to take the method of the bug repellent to minimize the chances of getting infected by them. Keeping a safe environment at home is also very important, not have too much accumulative objects that will attract mosquitoes, stanched up water, trash etc. Be smart and cautious and prevent this deadly virus.

Climate Change and the spread Of Zika Virus. (2019, May 12). Retrieved from https://papersowl.com/examples/climate-change-and-the-spread-of-zika-virus/