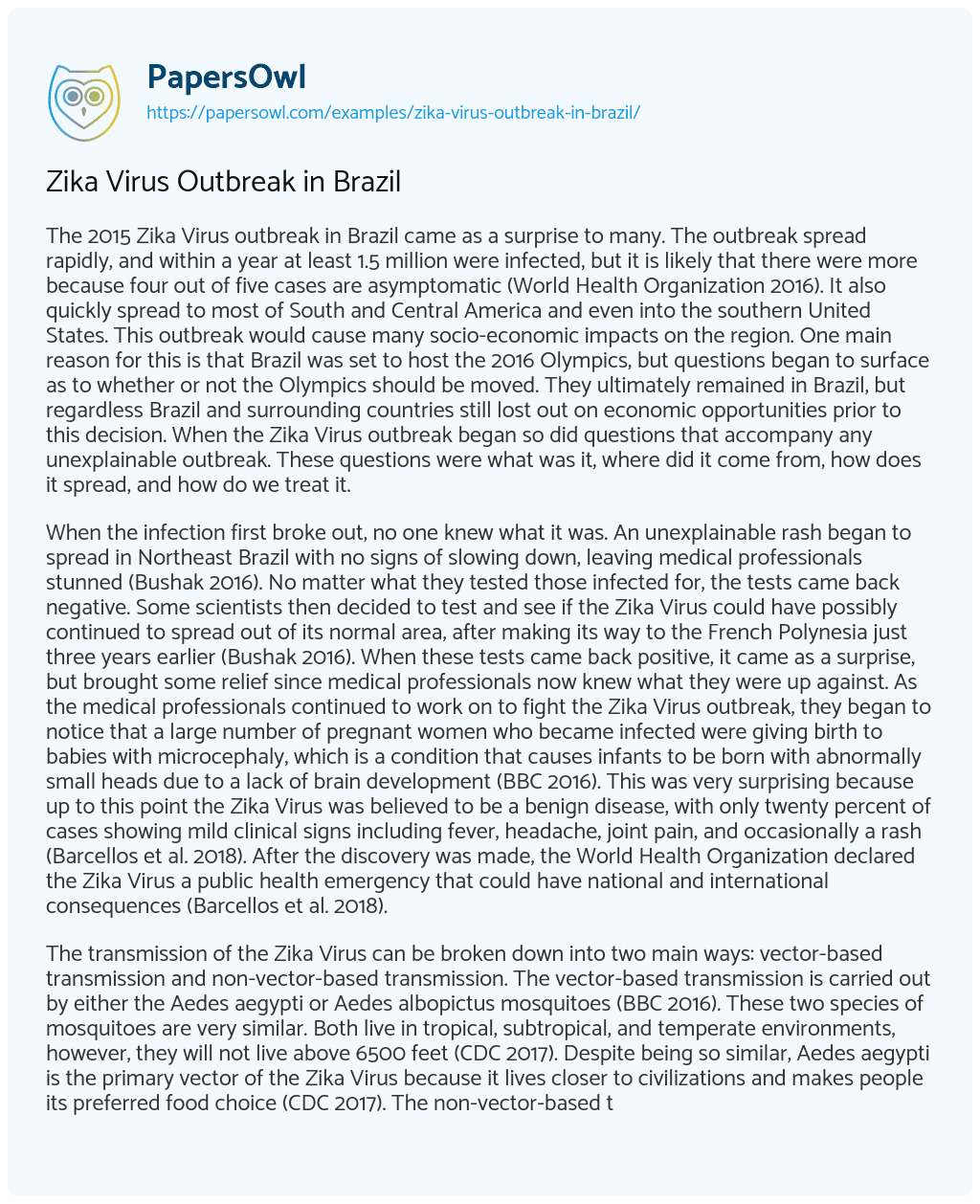 The 2015 Zika Virus outbreak in Brazil came as a surprise to many. The outbreak spread rapidly, and within a year at least 1.5 million were infected, but it is likely that there were more because four out of five cases are asymptomatic (World Health Organization 2016). It also quickly spread to most of South and Central America and even into the southern United States. This outbreak would cause many socio-economic impacts on the region. One main reason for this is that Brazil was set to host the 2016 Olympics, but questions began to surface as to whether or not the Olympics should be moved. They ultimately remained in Brazil, but regardless Brazil and surrounding countries still lost out on economic opportunities prior to this decision. When the Zika Virus outbreak began so did questions that accompany any unexplainable outbreak. These questions were what was it, where did it come from, how does it spread, and how do we treat it.

When the infection first broke out, no one knew what it was. An unexplainable rash began to spread in Northeast Brazil with no signs of slowing down, leaving medical professionals stunned (Bushak 2016). No matter what they tested those infected for, the tests came back negative. Some scientists then decided to test and see if the Zika Virus could have possibly continued to spread out of its normal area, after making its way to the French Polynesia just three years earlier (Bushak 2016). When these tests came back positive, it came as a surprise, but brought some relief since medical professionals now knew what they were up against. As the medical professionals continued to work on to fight the Zika Virus outbreak, they began to notice that a large number of pregnant women who became infected were giving birth to babies with microcephaly, which is a condition that causes infants to be born with abnormally small heads due to a lack of brain development (BBC 2016). This was very surprising because up to this point the Zika Virus was believed to be a benign disease, with only twenty percent of cases showing mild clinical signs including fever, headache, joint pain, and occasionally a rash (Barcellos et al. 2018). After the discovery was made, the World Health Organization declared the Zika Virus a public health emergency that could have national and international consequences (Barcellos et al. 2018).

When it came to battling the Zika Virus outbreak, there were few treatments available. The main forms of treatment were to rest, drink plenty of fluids, and treat the symptoms. This included taking acetaminophen for fever and pain, but not aspirin or anti-inflammatories due to risk of internal bleeding (World Health Organization 2016). The most productive form of controlling Zika Virus is through prevention. There are two main ways of prevention. The primary way is to prevent the spread via Aedes mosquitoes. This can be done through simply preventing mosquito bites by covering yourself with clothes, staying indoors, or applying insect repellent (CDC 2017). Another way to control the spread of Zika Virus is to try and control the Aedes mosquito population. One way this can be done is by removing any sitting water so that they can not lay any eggs, ultimately stopping their life cycle. Another thing communities can do is to spray insecticides throughout the city to try and kill off mosquitos. This can be done in three different ways. One way is through the use of backpack sprayers, which can be used to spray specific areas and for limited application in public areas (CDC 2017). Another way is through truck-mounting sprayers that are used to “mist” the city with small amounts of insecticides, killing some of the mosquito population (CDC 2017). The final but most accepted form of spraying is aerial spraying because it covers such a large area, but is used in such small amounts that it is not dangerous to humans or pets (CDC 2017). The last thing is to prevent sexual intercourse from spreading the Zika Virus. To totally eliminate the chance of spread by sexual intercourse, one can simply avoid having sexual intercourse while in threat of infection. If sexual intercourse is performed, a condom can be used to reduce chance of infection (CDC 2017).

The Zika Virus Outbreak in 2015 came as a surprise to many. It rapidly spread through much of North and South America, baffling medical professionals as to what it could be. After close examination, they finally pieced together that the Zika Virus had invaded the continents and began to put proper treatment and prevention measures into effect.

Climate Change and the Spread of Zika Virus