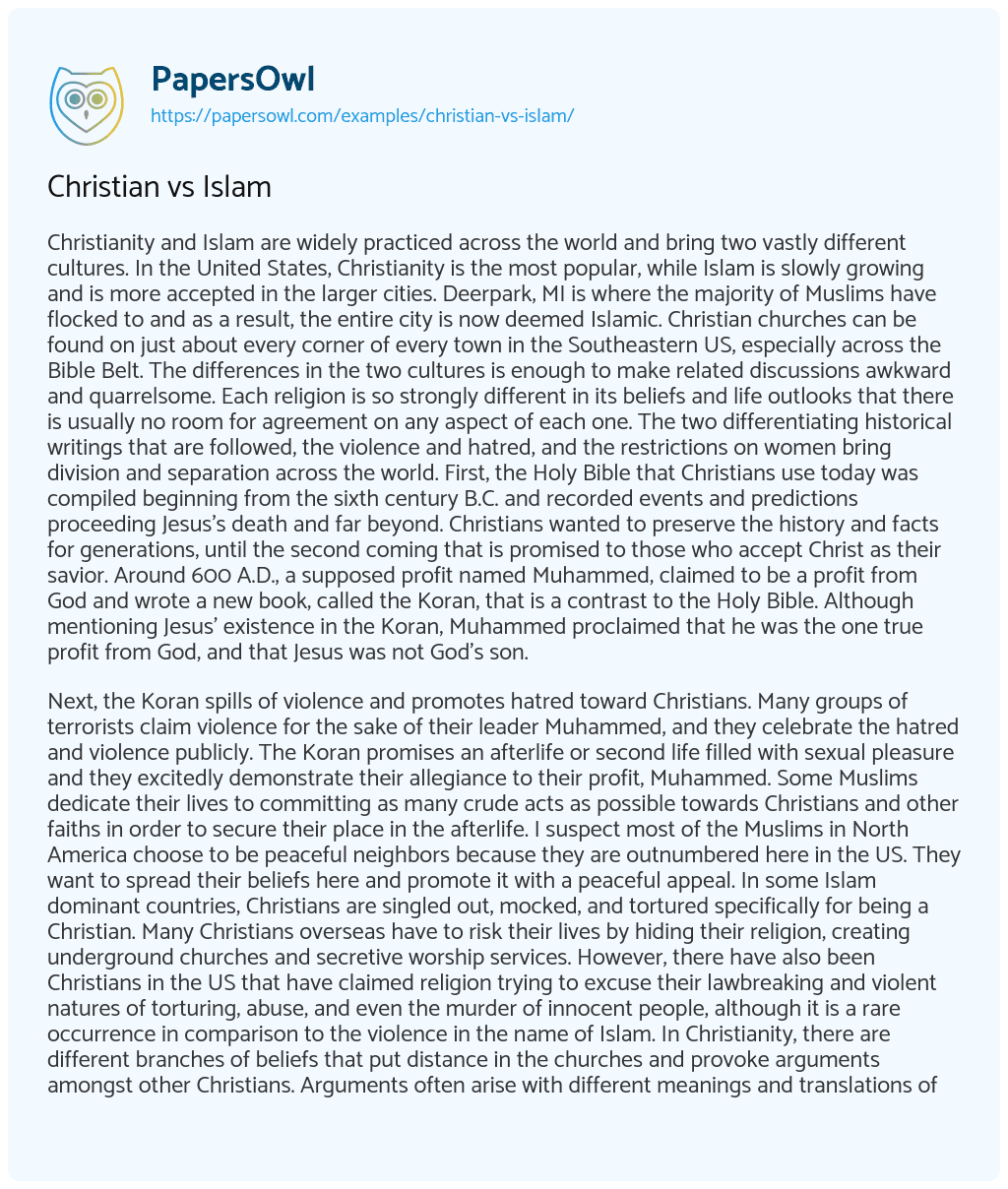 Christianity and Islam are widely practiced across the world and bring two vastly different cultures. In the United States, Christianity is the most popular, while Islam is slowly growing and is more accepted in the larger cities. Deerpark, MI is where the majority of Muslims have flocked to and as a result, the entire city is now deemed Islamic. Christian churches can be found on just about every corner of every town in the Southeastern US, especially across the Bible Belt. The differences in the two cultures is enough to make related discussions awkward and quarrelsome. Each religion is so strongly different in its beliefs and life outlooks that there is usually no room for agreement on any aspect of each one. The two differentiating historical writings that are followed, the violence and hatred, and the restrictions on women bring division and separation across the world. First, the Holy Bible that Christians use today was compiled beginning from the sixth century B.C. and recorded events and predictions proceeding Jesus’s death and far beyond. Christians wanted to preserve the history and facts for generations, until the second coming that is promised to those who accept Christ as their savior. Around 600 A.D., a supposed profit named Muhammed, claimed to be a profit from God and wrote a new book, called the Koran, that is a contrast to the Holy Bible. Although mentioning Jesus’ existence in the Koran, Muhammed proclaimed that he was the one true profit from God, and that Jesus was not God’s son.

Next, the Koran spills of violence and promotes hatred toward Christians. Many groups of terrorists claim violence for the sake of their leader Muhammed, and they celebrate the hatred and violence publicly. The Koran promises an afterlife or second life filled with sexual pleasure and they excitedly demonstrate their allegiance to their profit, Muhammed. Some Muslims dedicate their lives to committing as many crude acts as possible towards Christians and other faiths in order to secure their place in the afterlife. I suspect most of the Muslims in North America choose to be peaceful neighbors because they are outnumbered here in the US. They want to spread their beliefs here and promote it with a peaceful appeal. In some Islam dominant countries, Christians are singled out, mocked, and tortured specifically for being a Christian. Many Christians overseas have to risk their lives by hiding their religion, creating underground churches and secretive worship services. However, there have also been Christians in the US that have claimed religion trying to excuse their lawbreaking and violent natures of torturing, abuse, and even the murder of innocent people, although it is a rare occurrence in comparison to the violence in the name of Islam. In Christianity, there are different branches of beliefs that put distance in the churches and provoke arguments amongst other Christians. Arguments often arise with different meanings and translations of the Bible and also with the changes in society over time. In Islam, they are similar in that some believe in violence, while others translate their Koran into a peaceful act of living instead of vicious and anger acts towards outsiders.

Lastly, Christians do not have restrictions on advancements with women on education or positions of political power. Women are mostly supported in their choices and are expected to be somewhat educated in order to thrive and care for their family. In contrast, some Islamic cultures prevent women from driving cars or making life decisions for themselves, and even most believe women should wear head coverings and clothing and some including their arms and legs. (shahera law?) Although the blood and bones of all humans are made the same, no matter which God we choose to serve, our religious beliefs can determine whether or not we can live peacefully with our neighbors while we are still alive. For there to be a happy medium and coexist with each other, one of the two religions would have to support the other, implementing Shahera Law or acknowledging that Christ is the Son of God. Each move would cancel out the others book of reference, making the combination of cultures an impossible route of peace.

In Sexuality and Islam, Dialmy

Adoption is at the Core Center of Islam, and it is Considered a Fundamental Element