Character Analysis: Death of a Salesman 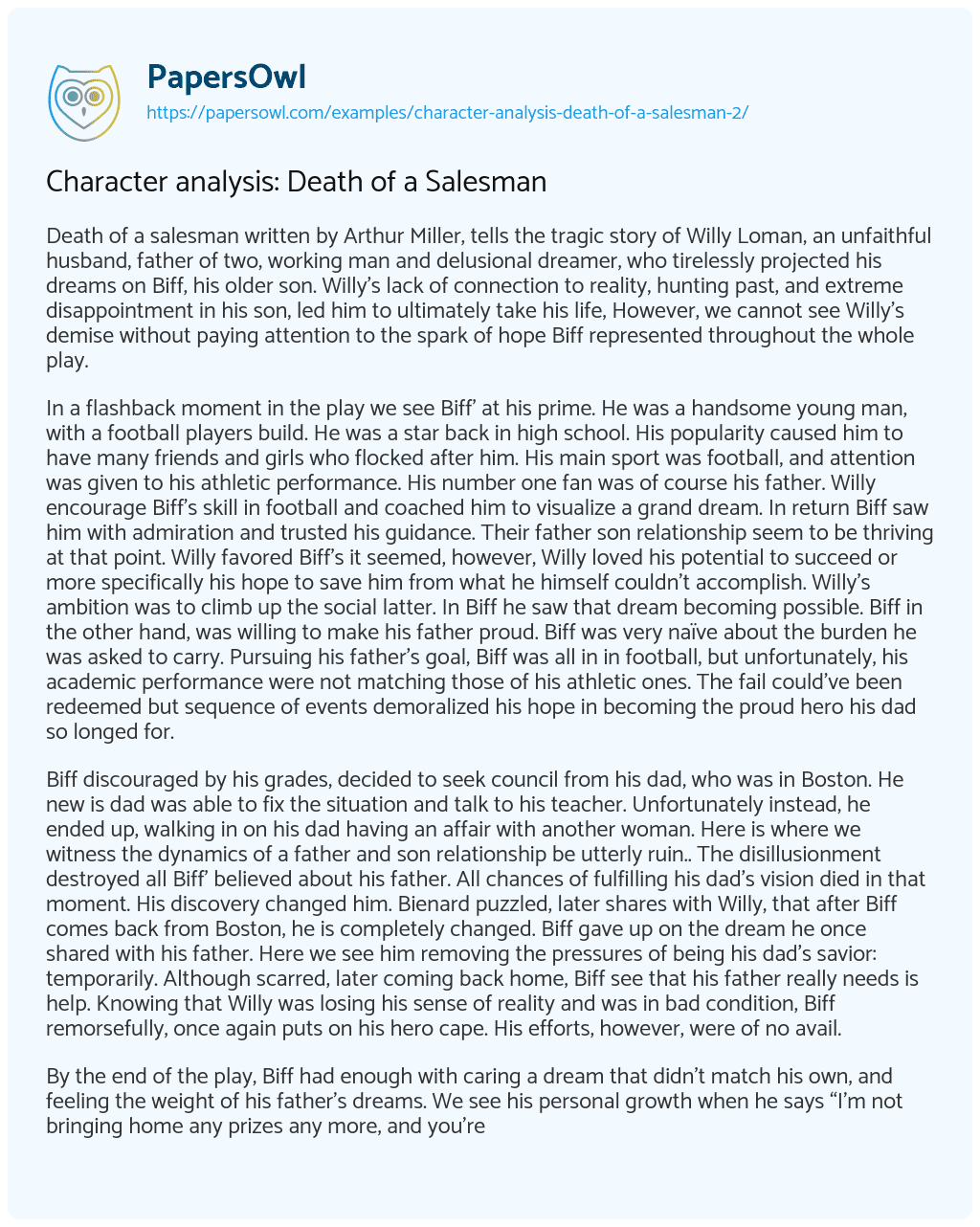 Death of a salesman written by Arthur Miller, tells the tragic story of Willy Loman, an unfaithful husband, father of two, working man and delusional dreamer, who tirelessly projected his dreams on Biff, his older son. Willy’s lack of connection to reality, hunting past, and extreme disappointment in his son, led him to ultimately take his life, However, we cannot see Willy’s demise without paying attention to the spark of hope Biff represented throughout the whole play.

In a flashback moment in the play we see Biff’ at his prime. He was a handsome young man, with a football players build. He was a star back in high school. His popularity caused him to have many friends and girls who flocked after him. His main sport was football, and attention was given to his athletic performance. His number one fan was of course his father. Willy encourage Biff’s skill in football and coached him to visualize a grand dream. In return Biff saw him with admiration and trusted his guidance. Their father son relationship seem to be thriving at that point. Willy favored Biff’s it seemed, however, Willy loved his potential to succeed or more specifically his hope to save him from what he himself couldn’t accomplish. Willy’s ambition was to climb up the social latter. In Biff he saw that dream becoming possible. Biff in the other hand, was willing to make his father proud. Biff was very naïve about the burden he was asked to carry. Pursuing his father’s goal, Biff was all in in football, but unfortunately, his academic performance were not matching those of his athletic ones. The fail could’ve been redeemed but sequence of events demoralized his hope in becoming the proud hero his dad so longed for.

Biff discouraged by his grades, decided to seek council from his dad, who was in Boston. He new is dad was able to fix the situation and talk to his teacher. Unfortunately instead, he ended up, walking in on his dad having an affair with another woman. Here is where we witness the dynamics of a father and son relationship be utterly ruin.. The disillusionment destroyed all Biff’ believed about his father. All chances of fulfilling his dad’s vision died in that moment. His discovery changed him. Bienard puzzled, later shares with Willy, that after Biff comes back from Boston, he is completely changed. Biff gave up on the dream he once shared with his father. Here we see him removing the pressures of being his dad’s savior: temporarily. Although scarred, later coming back home, Biff see that his father really needs is help. Knowing that Willy was losing his sense of reality and was in bad condition, Biff remorsefully, once again puts on his hero cape. His efforts, however, were of no avail.

By the end of the play, Biff had enough with caring a dream that didn’t match his own, and feeling the weight of his father’s dreams. We see his personal growth when he says “I’m not bringing home any prizes any more, and you’re going to stop waiting for me to bring them home…Pop, I’m nothing!” With honest truth, Biff explains that he is completely contempt and happy living a more simpler life. He desires only to be loved and valued for who he really is. Here Biff’s revelational truth had the true potential to save Willy. It would’ve been the best alteration to Willy’s view. Biff deeply loved his dad and was tired of the lie that’s so easily entangled him. Unlike his mother Linda, Willy was not trying to cover the issues but face them with honesty. Unbeknownst to him, Biff gave it one last shot. He extend it his perspective and desperately asked his father to let the dream go. Sadly, he was unable to communicate effectively with his father. Willy was unable to see Biff as a different type of hero with more affective powers. He rejected the freedom of truth that had the power to save him.

Biff’s role in the play shaped Willy’s tale. Biff was the only character who significantly changed throughout the play. I believe that Arthur Millerler use Biff’s character to trigger the audience’s moral conscience. He provokes readers to analyze the true meaning of life. The unfortunate turn of events could’ve all been avoided if Willy focused more on who Biff truly represented. Biff models the alternative reality of life, that so many of us choose to neglect. Biff’s character shows people how they can choose to see the world through the lens of simplicity, authentic awareness and truth. Being content in life produces happiness and helps you enjoy the people around you. Biff’, hidden in the depth of literature was truly Willy’s hero disguised to him in plain sight.

Character analysis: Death of a Salesman. (2021, Oct 17). Retrieved from https://papersowl.com/examples/character-analysis-death-of-a-salesman-2/

Literary Analysis – Death of a Salesman