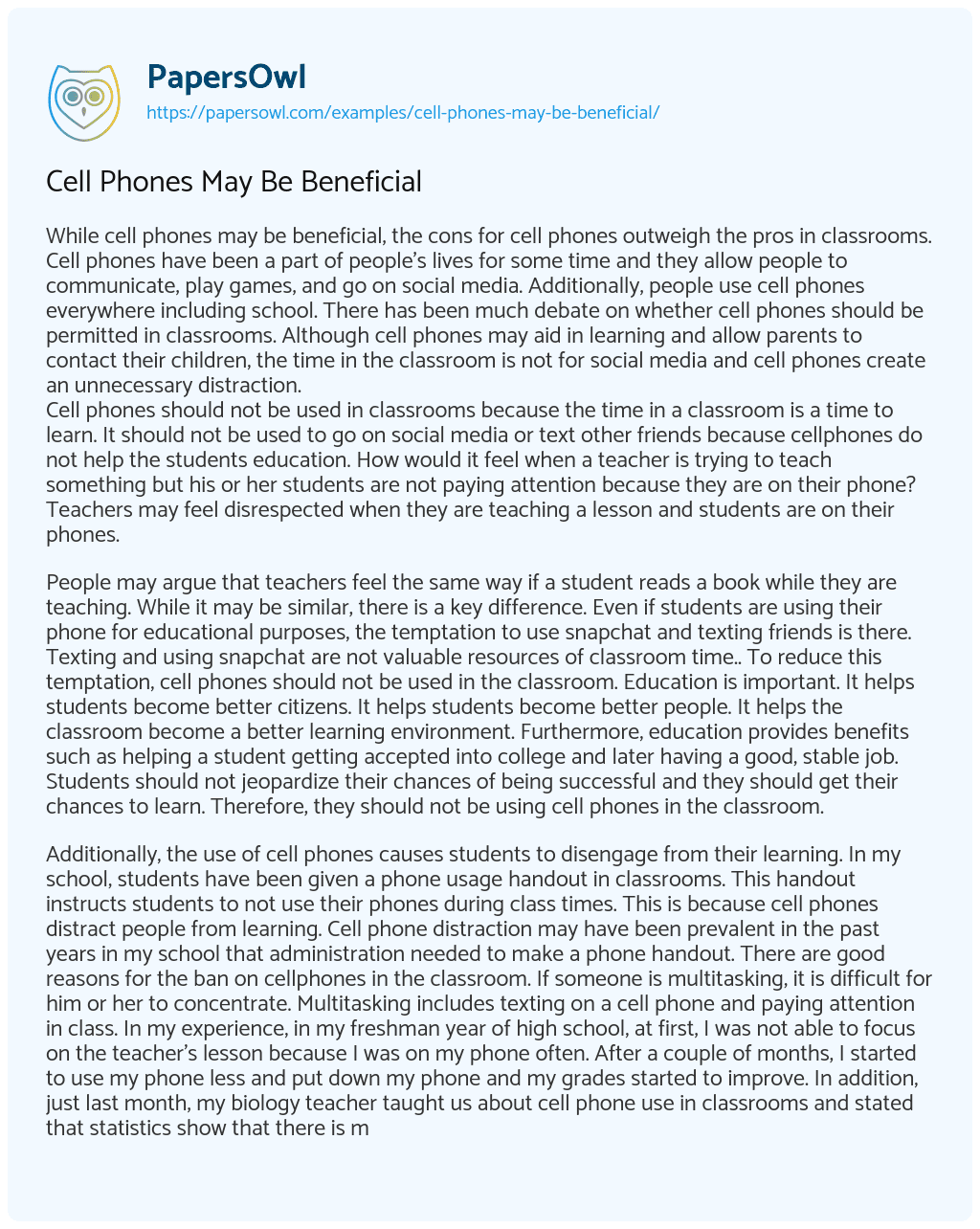 While cell phones may be beneficial, the cons for cell phones outweigh the pros in classrooms. Cell phones have been a part of people’s lives for some time and they allow people to communicate, play games, and go on social media. Additionally, people use cell phones everywhere including school. There has been much debate on whether cell phones should be permitted in classrooms. Although cell phones may aid in learning and allow parents to contact their children, the time in the classroom is not for social media and cell phones create an unnecessary distraction.
Cell phones should not be used in classrooms because the time in a classroom is a time to learn. It should not be used to go on social media or text other friends because cellphones do not help the students education. How would it feel when a teacher is trying to teach something but his or her students are not paying attention because they are on their phone? Teachers may feel disrespected when they are teaching a lesson and students are on their phones.

People may argue that teachers feel the same way if a student reads a book while they are teaching. While it may be similar, there is a key difference. Even if students are using their phone for educational purposes, the temptation to use snapchat and texting friends is there. Texting and using snapchat are not valuable resources of classroom time.. To reduce this temptation, cell phones should not be used in the classroom. Education is important. It helps students become better citizens. It helps students become better people. It helps the classroom become a better learning environment. Furthermore, education provides benefits such as helping a student getting accepted into college and later having a good, stable job. Students should not jeopardize their chances of being successful and they should get their chances to learn. Therefore, they should not be using cell phones in the classroom.

Additionally, the use of cell phones causes students to disengage from their learning. In my school, students have been given a phone usage handout in classrooms. This handout instructs students to not use their phones during class times. This is because cell phones distract people from learning. Cell phone distraction may have been prevalent in the past years in my school that administration needed to make a phone handout. There are good reasons for the ban on cellphones in the classroom. If someone is multitasking, it is difficult for him or her to concentrate. Multitasking includes texting on a cell phone and paying attention in class. In my experience, in my freshman year of high school, at first, I was not able to focus on the teacher’s lesson because I was on my phone often. After a couple of months, I started to use my phone less and put down my phone and my grades started to improve. In addition, just last month, my biology teacher taught us about cell phone use in classrooms and stated that statistics show that there is more grade improvement for those students who are not on their phones than those students who are on their phones. For that reason, students should not use their phone in classrooms so that their grades will improve.

In contrast, people argue that teachers may allow students to use their phones to help aid in learning, but in many schools there are chromebooks that people can use instead of phones. Chromebooks have the same function as cell phones as they both assist in searching important information. However, chromebooks do not allow for the use of social media and texting which is why they are a more reliable source than cell phones. Furthermore, although parents believe that it is important to contact their children in case there is an emergency, there are other ways to get in touch with them. Parents can contact the main office if they want to speak with their children and the main office can contact the students’ teacher. There are multiple opportunities for using technology to assist in learning and for parents to contact their child without the use of cell phones.

Cell phones should not be used in classrooms because there is no need for cell phones when classroom time is a time for learning and cell phones are an avoidable distraction. I encourage students to not use their cellphones in class and to pay attention to their teacher. Students should not ruin their chances at learning just for a couple minutes on their phone. They should put away distractions, learn, and educate themselves in order to be successful.

Cell Phones May Be Beneficial. (2019, Sep 16). Retrieved from https://papersowl.com/examples/cell-phones-may-be-beneficial/

No Cell Phones Allowed in Class

Students should not Use Cell Phones in School

Cell Phone Use during School

Technology is a Useful Servant

Cell Phones Give off