Capitalism and its Role 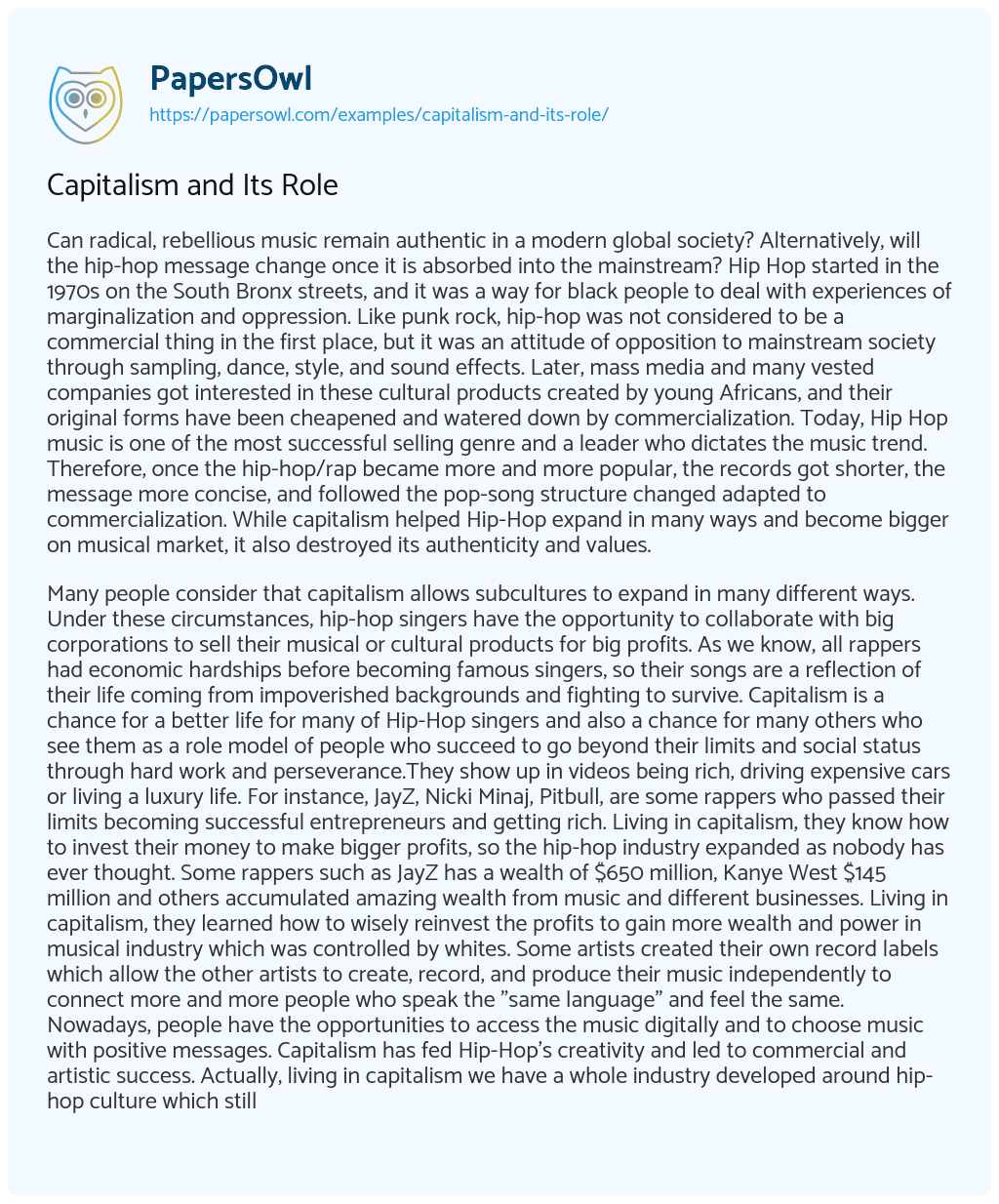 Can radical, rebellious music remain authentic in a modern global society? Alternatively, will the hip-hop message change once it is absorbed into the mainstream? Hip Hop started in the 1970s on the South Bronx streets, and it was a way for black people to deal with experiences of marginalization and oppression. Like punk rock, hip-hop was not considered to be a commercial thing in the first place, but it was an attitude of opposition to mainstream society through sampling, dance, style, and sound effects. Later, mass media and many vested companies got interested in these cultural products created by young Africans, and their original forms have been cheapened and watered down by commercialization. Today, Hip Hop music is one of the most successful selling genre and a leader who dictates the music trend. Therefore, once the hip-hop/rap became more and more popular, the records got shorter, the message more concise, and followed the pop-song structure changed adapted to commercialization. While capitalism helped Hip-Hop expand in many ways and become bigger on musical market, it also destroyed its authenticity and values.

Many people consider that capitalism allows subcultures to expand in many different ways. Under these circumstances, hip-hop singers have the opportunity to collaborate with big corporations to sell their musical or cultural products for big profits. As we know, all rappers had economic hardships before becoming famous singers, so their songs are a reflection of their life coming from impoverished backgrounds and fighting to survive. Capitalism is a chance for a better life for many of Hip-Hop singers and also a chance for many others who see them as a role model of people who succeed to go beyond their limits and social status through hard work and perseverance.They show up in videos being rich, driving expensive cars or living a luxury life. For instance, JayZ, Nicki Minaj, Pitbull, are some rappers who passed their limits becoming successful entrepreneurs and getting rich. Living in capitalism, they know how to invest their money to make bigger profits, so the hip-hop industry expanded as nobody has ever thought. Some rappers such as JayZ has a wealth of $650 million, Kanye West $145 million and others accumulated amazing wealth from music and different businesses. Living in capitalism, they learned how to wisely reinvest the profits to gain more wealth and power in musical industry which was controlled by whites. Some artists created their own record labels which allow the other artists to create, record, and produce their music independently to connect more and more people who speak the “same language” and feel the same. Nowadays, people have the opportunities to access the music digitally and to choose music with positive messages. Capitalism has fed Hip-Hop’s creativity and led to commercial and artistic success. Actually, living in capitalism we have a whole industry developed around hip-hop culture which still remains the voice of oppressed people and a successful role model for millions of youths.

Hip Hop dictates everyday mannerisms, car choices, fashion, hairstyle, dialect, musical preference, and even common greetings. Darren Wright, the director of Nike, explains that “With hip-hop, you’re buying more than music. It isn’t a genre it’s a lifestyle, encompassing fashion, break dancing, the clothes or the jewels you wear… The lifestyle is worth its weight in gold because it’s not just about one rap song, it’s so much more”(prospectmagazine.co.uk). Nowadays everybody can listen to hip hop at radio, outdoor parties, TV, the Internet, YouTube, social media websites, or attend a plethora of hip-hop concerts. This musical genre has opened up for millions of people who are eager to get into and enjoy this rebellious culture. Capitalism offers hip-hop fans possibility to feel, live, and be part of this culture without limits.

Perhaps capitalism helps hip-hop culture develop in many ways, but it also changed its whole content and message making it commercial and fit the mainstream. The leader KRS-One, who was part of the birth of hip-hop culture, explains: “In the beginning hip-hop was a way of saying I see what y’all are doing over there, and fuck all that!”( Pope, pg. 80). In other words, KRS-One referred to hip-hop as a way of expression of carelessness to and rejection of mainstream tastes and standards. Hip-hop was largely created by poor and excluded minorities in the South Bronx who decided to form their own identity through music, graffiti, and breakdancing. So, they started by taking elements of mainstream society and modifying these elements to create the hip-hop “beats” or “samples” of famous mainstream rock. In this way, a few seconds of a song was repeated. The hip-hop music immediately began to challenge musical norms and, more importantly, the rules of society. It was a cry against a capitalist economic system and racist government, and it was the voice of oppressed and marginalized people. Consequently, Hip-hop was created to be a powerful, legitimate movement that resisted mainstream culture by challenging the standards of the mainstream, exposing problems and conditions which were ignored by leaders, dealing with the power relationships being instrumentally politic. Under these circumstances, the lyrics were a reflection of marginalized people’s life so that the artists could show tension, anger, and hopelessness through music. The audience was the minority, especially impoverished youth. Nowadays, the condition has changed and what was once the performance of life, now becomes a concert, a show, or a CD. Hip-Hop became part of popular culture, and since some capitalists invested money in this culture, they changed the rules and exposed it more and more. The standards are those based on consensus, on what the public likes rather than what the artist loves or feels. The Hip Hop message is more connected to the mass people’s wish, so it is a need to be commercial and understandable. Corporations record labels and filter the extreme messages before being promoted, and those that are radical will be excluded because they do not have the chance to succeed and make profits to the corporation. So, we cannot talk any more about absolute liberty of expression since the media and other corporations have the power to decide which product to be promoted and even after promotion, they still hold control over it. This economical filter watered down the hip-hop culture since its meaning must go with then mainstream nature to attract listeners, radio station sponsors, and money. Then, extremist messages send through hip-hop can cause conflicts or troubles with some governmental institution which can be offended. Also, the name of those recording companies is at the risk of losing prestige and money if a musical project failed. As time goes by, millions of people could enjoy hip-hop music but in an industrialized form with a different meaning and message.

An essential question rose up – Is there any chance that capitalism can coexist with a subculture? Perhaps they can coexist in a society which art music is more protected by laws and singers by fair contracts. On one hand, Capitalism leads to a variety of offers, and this is a good aspect, but on the other hand, the consumers have the power to choose between right, high-quality products and “imitations,” and their choices can set the way music and its message will be created.

Thinking more about the capitalism – Hip-Hop relationship, I understand better the benefits offered by capitalism to Hip Hop, but I still ponder over the material gain and professional success versus its cultural values . I truly agreed that capitalism created a whole industry around Hop Hop and gave people all around the world the opportunity of enjoying Hip Hop “speaking the same language” and resonating with its message. Hip Hop singers who were very poor in the beginning became rich , with decisional power in their community, and role model of success for many other oppressed or helpless people. Nowadays, Hip Hop is everywhere on advertisements, the image of some brands, political campaigns, clothes, and so on. Therefore, Hip-Hop became a powerful tool for making big profits and changing lots of people’s social status. Capitalism should go hand in hand with Hip-Hop’s authentic values and not intervene too much by imposing drastically changes to make it commercial. Perhaps we could agree that cultural values are above financially gain since they reflect people’s identity and way of resistance to an unfair system. Also, money is vital for the well-being of a society, so investing in Hip-Hop can be a good way to help the whole society, but we should do it in a responsible and reasonable way. Cultures define what we are, feel , and live. Capitalism is a new choreography in Hip-Hop, having a great impact on society and its values and standards.

Capitalism and Its Role. (2019, Apr 29). Retrieved from https://papersowl.com/examples/capitalism-and-its-role/

Capitalism is an Unparalleled Economic and Political System

Capitalism and Consumerism Throughout Art