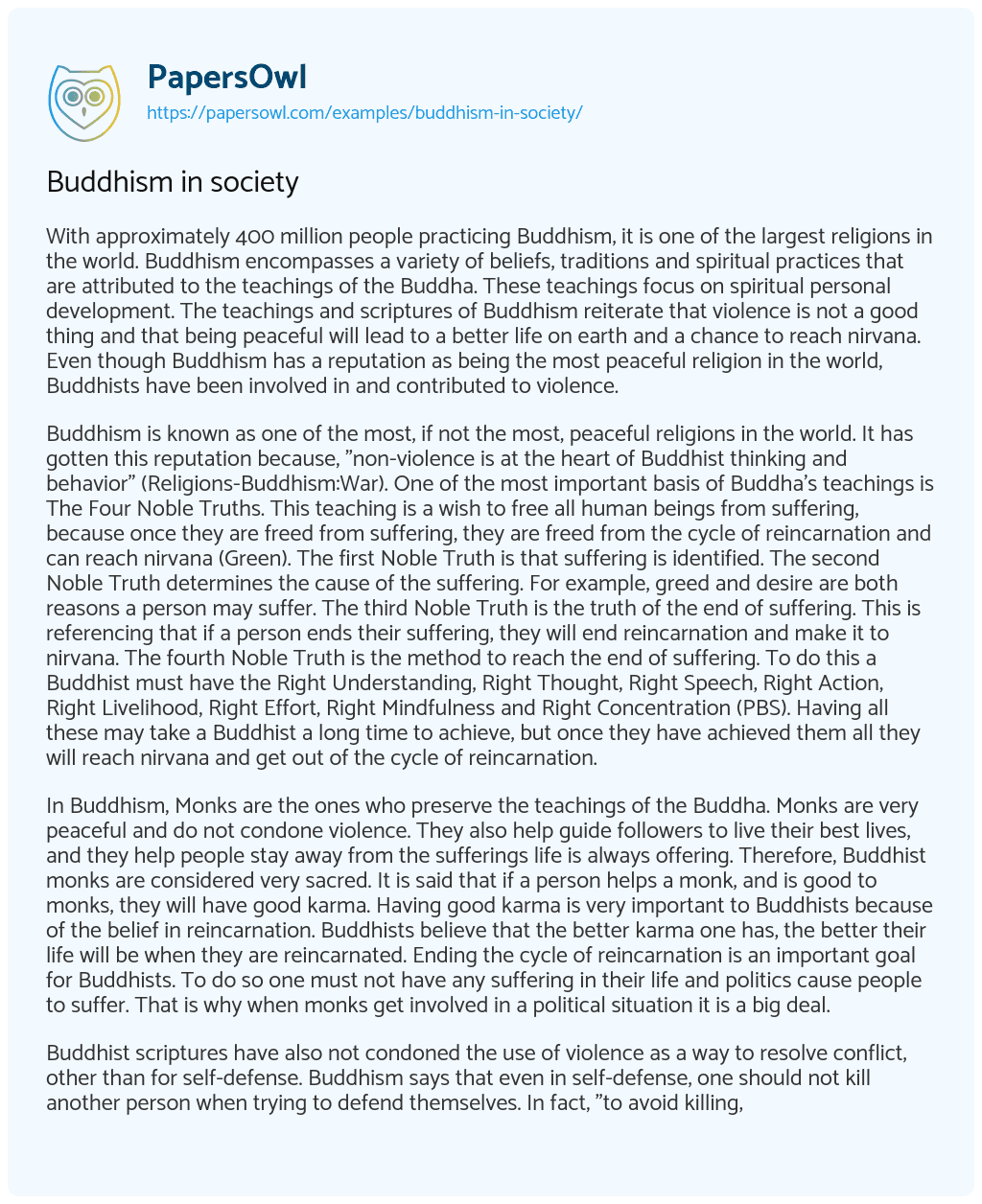 With approximately 400 million people practicing Buddhism, it is one of the largest religions in the world. Buddhism encompasses a variety of beliefs, traditions and spiritual practices that are attributed to the teachings of the Buddha. These teachings focus on spiritual personal development. The teachings and scriptures of Buddhism reiterate that violence is not a good thing and that being peaceful will lead to a better life on earth and a chance to reach nirvana. Even though Buddhism has a reputation as being the most peaceful religion in the world, Buddhists have been involved in and contributed to violence.

Buddhism is known as one of the most, if not the most, peaceful religions in the world. It has gotten this reputation because, “non-violence is at the heart of Buddhist thinking and behavior” (Religions-Buddhism:War). One of the most important basis of Buddha’s teachings is The Four Noble Truths. This teaching is a wish to free all human beings from suffering, because once they are freed from suffering, they are freed from the cycle of reincarnation and can reach nirvana (Green). The first Noble Truth is that suffering is identified. The second Noble Truth determines the cause of the suffering. For example, greed and desire are both reasons a person may suffer. The third Noble Truth is the truth of the end of suffering. This is referencing that if a person ends their suffering, they will end reincarnation and make it to nirvana. The fourth Noble Truth is the method to reach the end of suffering. To do this a Buddhist must have the Right Understanding, Right Thought, Right Speech, Right Action, Right Livelihood, Right Effort, Right Mindfulness and Right Concentration (PBS). Having all these may take a Buddhist a long time to achieve, but once they have achieved them all they will reach nirvana and get out of the cycle of reincarnation.

In Buddhism, Monks are the ones who preserve the teachings of the Buddha. Monks are very peaceful and do not condone violence. They also help guide followers to live their best lives, and they help people stay away from the sufferings life is always offering. Therefore, Buddhist monks are considered very sacred. It is said that if a person helps a monk, and is good to monks, they will have good karma. Having good karma is very important to Buddhists because of the belief in reincarnation. Buddhists believe that the better karma one has, the better their life will be when they are reincarnated. Ending the cycle of reincarnation is an important goal for Buddhists. To do so one must not have any suffering in their life and politics cause people to suffer. That is why when monks get involved in a political situation it is a big deal.

Buddhist scriptures have also not condoned the use of violence as a way to resolve conflict, other than for self-defense. Buddhism says that even in self-defense, one should not kill another person when trying to defend themselves. In fact, “to avoid killing, is a pre- requisite for belonging to any Buddhist community, either as a monk or as a layperson” (Sinclair, 149). This is because, Buddhism believes that there are other, more peaceful ways to resolve conflict than to use violence. Conducting a peaceful protest is an example that Buddhists have used before. For example, the protests in the country of Burma, now known as Myanmar.

In Burma, “nearly 88 percent of citizens are Buddhist, with the remainder identifying as Christian (6 percent), Muslim (less than 5 percent), Hindu (0.5 percent), and others” (Schober). In 2007, the government raised the prices of fuel with no warning. Angry about this, the mostly Buddhist population began peacefully protesting. Feeling like they were being threatened, the government began to brutally crackdown on the peaceful demonstrators by arresting hundreds of people, including many of the protest leaders (“2007 Uprising in Burma”).Even though the protest leaders were arrested and a lot of people involved were forced into hiding, the protests continued. When Buddhist monks joined, the protest took on a whole new momentum.

Thousands of monks marched the streets holding their begging bowls upside down. By doing this, it meant that the monks would not accept anything from government officials. This action ultimately gave the officials bad karma. Afraid of causing more backlash and making the protest bigger, the government did not want to harm or intervene with the protest immediately. The monks demands were the release of all demonstrators and political prisoners (“2007 Uprising in Burma”). This included Aung San Suu Kyi, a Burmese politician, and 1991 Nobel Peace Prize winner, who was on house arrest for decades of her life. The failure to meet this demand started a new wave of nationwide protests (“2007 Uprising in Burma”). The number of people participating grew tremendously and eventually the officials resorted to violence towards the Buddhist civilians and monks. Monks were “forcibly disrobed, severely beaten, kicked, and taken away by the security forces. Army troops and riot police clubbed and tear-gassed protesters, fired shots on protesting monks and demonstrators, and arrested hundreds of the monks who were at the heart of the demonstrations” (“2007 Uprising in Burma”). Even with all the violence that the government officials brought upon the protestors, the monks and people of Burma were still peaceful.

Aung San Suu Kyi was eventually released and continued the fight for democracy in Burma. She was highly “respected and admired for her courage and perseverance in the struggle for human rights and basic freedoms in a country where ‘fear is a habit’ and military misrule treats too many of its own citizens as enemies” (Lang, 61). Suu Kyi was not allowed to become the president in Burma, so she adopted the title of state counselor. She was a hero to most Buddhists in Burma and to a lot of people around the world, but in recent years Suu Kyi has been watching violence against Muslims in her country and doing nothing to stop it. Suu Kyi has done nothing to minimize what the U.N. has called “acts of genocide” and a “textbook case of ethnic cleansing” (Samuels, 22). When she is questioned about it, Suu Kyi brushes the question off and has even said that she knows what is best for her country.

Since the Buddhist monk protests in 2007 against the military government, Buddhist monks and followers have been in a state of uneasiness in Burma. The tension between Buddhists and people from other religions, especially Rohingya Muslims, has grown and violence has created an ethnic cleansing of the country. Buddhist monks have led this new trend that disregards the basic beliefs and practices of Buddhism (Wills). The Buddhists in Burma believe that they deserve their own country, and they do not want people of other religions in their country. Being the major religion in Burma is not enough anymore, they want to be the only religion in Burma. Due to the involvement of the monks, the violence has become over the top and ugly. Rohingya Muslims believe that they have been treated poorly, by the Buddhists in Burma, and the government and military have done nothing about it. Defending themselves, the government says that the Rohingya people are illegal and do not belong in their country of Burma. With the title put on the Rohingya people as “illegal”, the government, and the people of Burma have been breaking the law killing Rohingyas to get rid of them. Since August 2017,about “700,000 Rohingya Muslims have fled their villages and crossed the border into Bangladesh, where they live in overcrowded camps with limited access to food, medicine and education” (“PressTV”).

The number of people fleeing from Burma to Bangladesh is rising every day. This is a problem because Bangladesh is one of the poorest countries in the world and cannot support all the people entering their country. There are not many resources available to support these Rohingya people and many are left without food or water. This leaves the Rohingyas with no place to go.

Buddhism is one of, if not the most, peaceful religions in the world. At the heart of their teachings, beliefs and scriptures, being peaceful is one of the most important things in their religion. Other than for self-defense, Buddhism does not endorse violence. The way Buddhists try to prevent violence is by teaching their followers that there is always a peaceful way to end conflict. However, even the most peaceful religion that does not endorse violence turned to violence and still is turning to violence. The need to defend Buddhism and to defend a country where “only Buddhists should be” has rallied Buddhists together and has created a genocide against Muslims in Burma. Conflict is very hard when mixed with nationalism and it can take even the most peaceful people, like monks, and turn them to the use of violence.

Essay about the Matrix and Buddhism