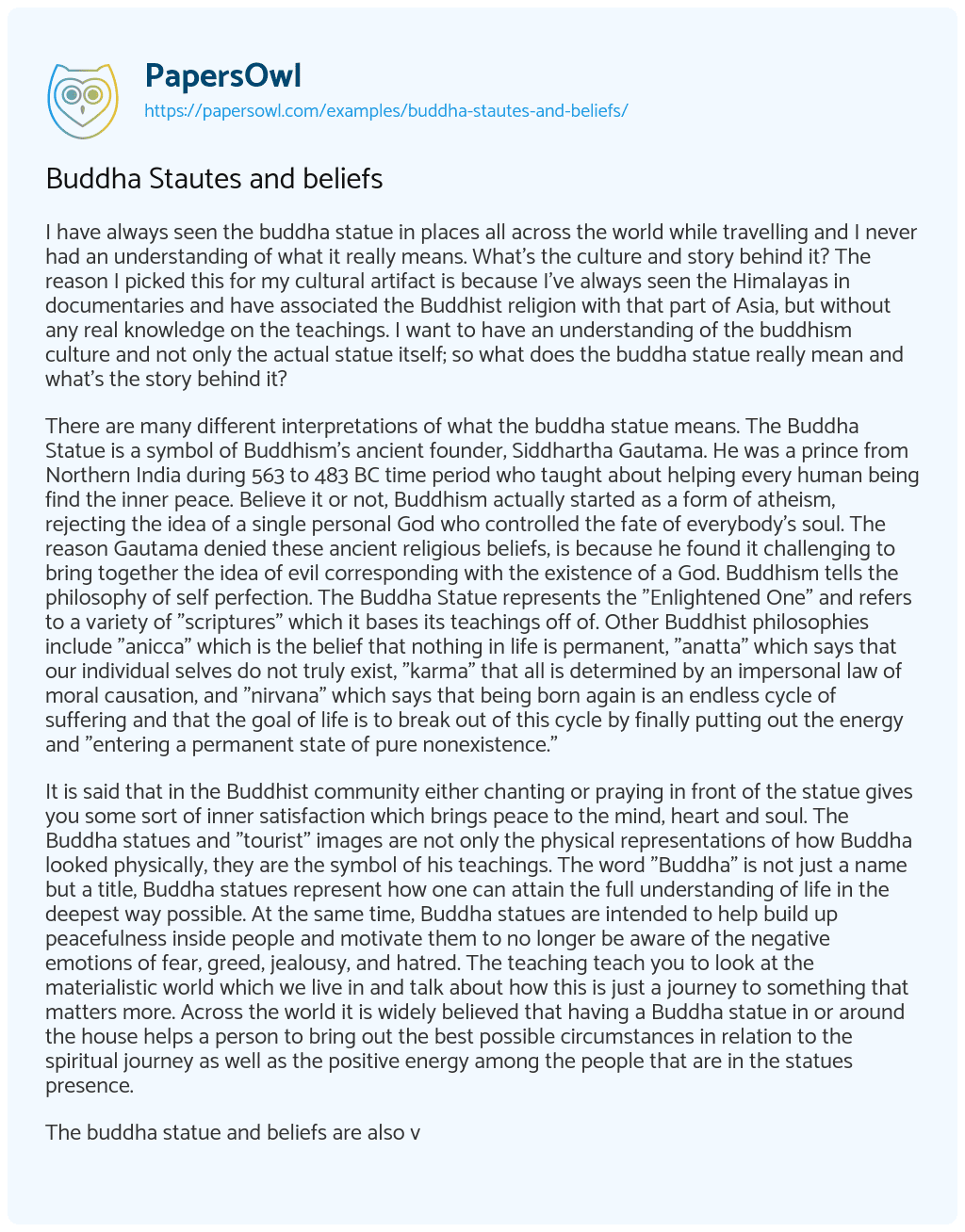 I have always seen the buddha statue in places all across the world while travelling and I never had an understanding of what it really means. What’s the culture and story behind it? The reason I picked this for my cultural artifact is because I’ve always seen the Himalayas in documentaries and have associated the Buddhist religion with that part of Asia, but without any real knowledge on the teachings. I want to have an understanding of the buddhism culture and not only the actual statue itself; so what does the buddha statue really mean and what’s the story behind it?

There are many different interpretations of what the buddha statue means. The Buddha Statue is a symbol of Buddhism’s ancient founder, Siddhartha Gautama. He was a prince from Northern India during 563 to 483 BC time period who taught about helping every human being find the inner peace. Believe it or not, Buddhism actually started as a form of atheism, rejecting the idea of a single personal God who controlled the fate of everybody’s soul. The reason Gautama denied these ancient religious beliefs, is because he found it challenging to bring together the idea of evil corresponding with the existence of a God. Buddhism tells the philosophy of self perfection. The Buddha Statue represents the “Enlightened One” and refers to a variety of “scriptures” which it bases its teachings off of. Other Buddhist philosophies include “anicca” which is the belief that nothing in life is permanent, “anatta” which says that our individual selves do not truly exist, “karma” that all is determined by an impersonal law of moral causation, and “nirvana” which says that being born again is an endless cycle of suffering and that the goal of life is to break out of this cycle by finally putting out the energy and “entering a permanent state of pure nonexistence.”

It is said that in the Buddhist community either chanting or praying in front of the statue gives you some sort of inner satisfaction which brings peace to the mind, heart and soul. The Buddha statues and “tourist” images are not only the physical representations of how Buddha looked physically, they are the symbol of his teachings. The word “Buddha” is not just a name but a title, Buddha statues represent how one can attain the full understanding of life in the deepest way possible. At the same time, Buddha statues are intended to help build up peacefulness inside people and motivate them to no longer be aware of the negative emotions of fear, greed, jealousy, and hatred. The teaching teach you to look at the materialistic world which we live in and talk about how this is just a journey to something that matters more. Across the world it is widely believed that having a Buddha statue in or around the house helps a person to bring out the best possible circumstances in relation to the spiritual journey as well as the positive energy among the people that are in the statues presence.

The buddha statue and beliefs are also very popular within meditation. Many people who are very passionate about meditation are known use the Buddha as the source of inspiration to pursue their meditation goals. It is believed that statue can help people focus in meditation, which will help them achieve the higher ranks, as the Buddha himself attained enlightenment by practicing the same meditation.

According to “Thebuddhistcentre.com” Buddhism is a path of spiritual development leading to the awareness of the true nature of reality. Meditation is intended to be a source in which you can change yourself in order to develop the qualities of awareness, kindness, and wisdom. Once you reach enlightenment, you are now capable of seeing the true nature of reality absolutely clearly. Buddhists live fully and naturally alongside that vision and their day to day activities all revolve around the enlightened persons perceptions of the materialistic world. The goal of the Buddhist spiritual life and reaching enlightenment represents the end of suffering for anyone who can reach it. Some people don’t perceive Buddhism as an actual religion because it does not include the idea of worshipping a single creator or god. The basic meanings of Buddhist teaching are straightforward; nothing is permanent or fixed. They believe any change is possible. There is not a certain race, nationality, sex, or gender which Buddhism addresses itself to, it is intended to be heard and taught by everybody. It teaches practical methods which enables people to be fully responsible for their lives.

While researching I came across an article titled “the dark side of buddhism.” on Wiseattention.org; there’s always two or more sides to a story so I found it interesting to hear a negative opinion on the buddhism teaching themselves. What I discovered was that when reading articles Buddhism looks pretty good, but Buddhism is supposed to help people reach enlightenment who wouldn’t be able to reach it otherwise; buddhism is full of violent and negative people searching for relief from their past. The cycle of reincarnation forces us to live again and again in this horrible world until we get it right and learn to not exist. A quote a monk gave after she had a near death experience was returning to civilization was comparable ” to a sewer where you do nothing but subsist on human excrement.” Buddhists believe life is suffering and it is something to be finally escaped. The buddhist “religion” is something very interesting and outlandish compared to the traditional stories told by religions beings; it’s quite the opposite. Although buddhists believe life is a burdon and the ultimate goal is to escape that and achieve enlightenment, their overall goal is to bring peacefulness and joy to everyone’s life and to be happy with yourself. Thats why so many people who have had made mistakes in their life often turn to buddhism because anything can be turned around and once you find that inner peace and reach enlightenment you are saved and no longer have those troubles in your background. It’s a very controversial and confusing topic but once you research it and learn the true meaning buddhism is turn out to be very interesting.

When I first chose this object as my cultural artifact I had absolutely no knowledge on the topic itself; all I knew was the buddha represented buddhism which was a religion. After researching this in depth I’ve discovered it’s something quite different and out of the ordinary of the traditional religions. Buddhists pride themselves on reaching a point of enlightenment, they don’t live in a world where they value the materialistic items; they believe the best part comes once the cycle of reincarnation ends. I find this to be interesting because the topic of reincarnation is somewhat outlandish but very intriguing at the same time. Most people would think of being reincarnated as something amazing but Buddhist think of it as a horrible cycle which does not come to an end until you reach enlightenment. Every time I see a Buddha statue I’m now going to have a different mindset on it and probably feel blessed to be in the presence of the positive aura, which apparently in beneficial to every person and bring out inner peacefulness. I’ve always been interested in the Himalayas and i’ve always associated buddhism with the Monks and people who live in that area of Asia. If I were asked previously about buddhism I would’ve said it’s a religion who have somewhat strange ideals, but since then I’ve got a new understanding. I’ve learned a lot from this research and I feel much more knowledgeable on the topic which helped me open my mind and understand the traditions and story behind the little famous Buddha statue icon.

The Fictional Character Siddhartha and Buddha