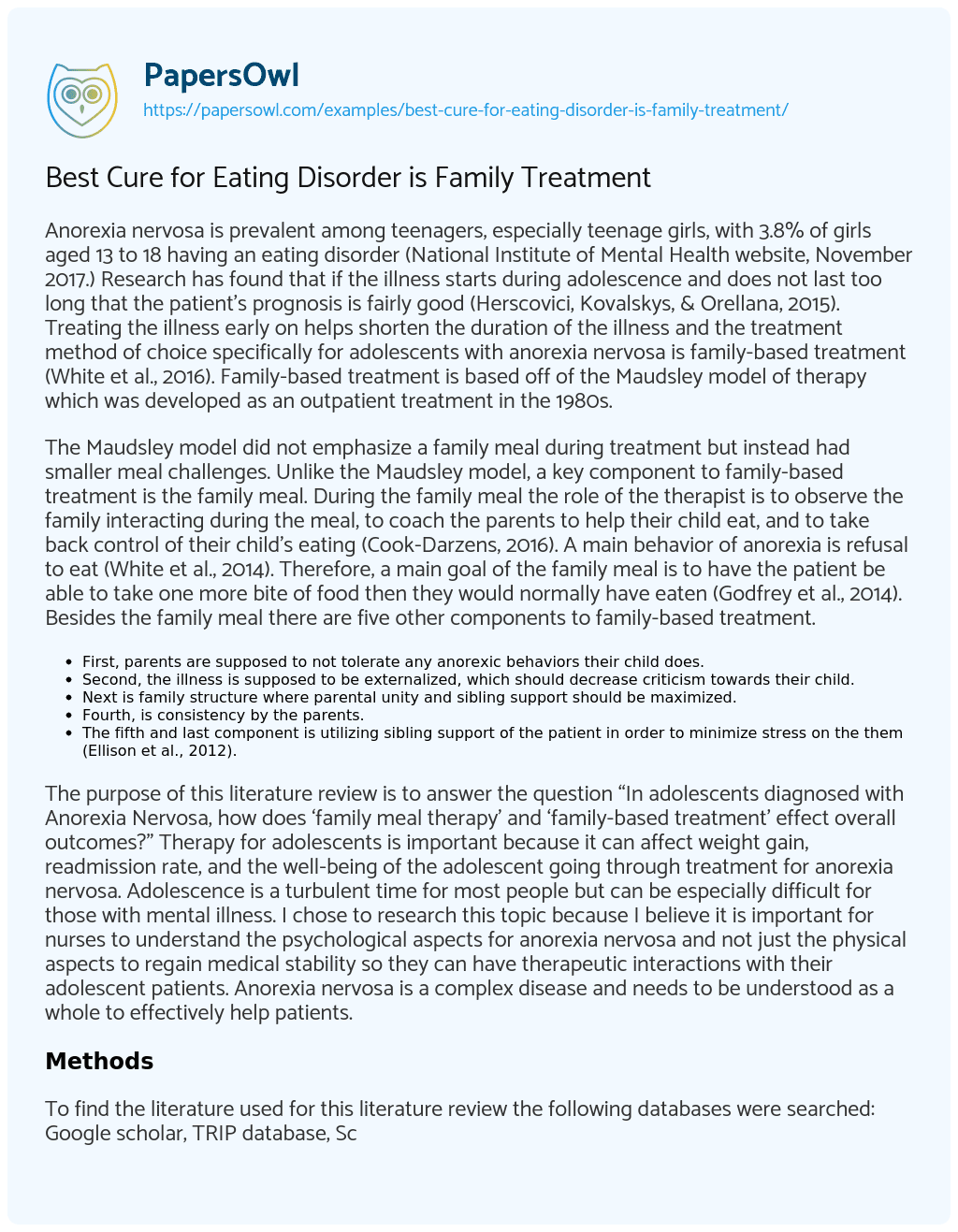 Anorexia nervosa is prevalent among teenagers, especially teenage girls, with 3.8% of girls aged 13 to 18 having an eating disorder (National Institute of Mental Health website, November 2017.) Research has found that if the illness starts during adolescence and does not last too long that the patient’s prognosis is fairly good (Herscovici, Kovalskys, & Orellana, 2015). Treating the illness early on helps shorten the duration of the illness and the treatment method of choice specifically for adolescents with anorexia nervosa is family-based treatment (White et al., 2016). Family-based treatment is based off of the Maudsley model of therapy which was developed as an outpatient treatment in the 1980s.

The purpose of this literature review is to answer the question “In adolescents diagnosed with Anorexia Nervosa, how does ‘family meal therapy’ and ‘family-based treatment’ effect overall outcomes?” Therapy for adolescents is important because it can affect weight gain, readmission rate, and the well-being of the adolescent going through treatment for anorexia nervosa. Adolescence is a turbulent time for most people but can be especially difficult for those with mental illness. I chose to research this topic because I believe it is important for nurses to understand the psychological aspects for anorexia nervosa and not just the physical aspects to regain medical stability so they can have therapeutic interactions with their adolescent patients. Anorexia nervosa is a complex disease and needs to be understood as a whole to effectively help patients.

To find the literature used for this literature review the following databases were searched: Google scholar, TRIP database, Science Direct, Ovid, and MEDLINE/PubMed. The following key words and phrases were searched in varying combinations: adolescent, anorexia, anorexia nervosa, eating disorder, meal, family meal, family meal therapy, Maudsley, family style meal, “treatment for anorexia”, and family based ‘treatment for anorexia.’ During some searches exclusion criteria was used only allowing articles from 2014 or later. However, in other searches there was no exclusion criteria used but any article from before 2000 was not considered. Articles were skimmed and chosen based off of their title, abstract, and year written. If an article focused only on multi-family therapy it was not used. Once selected the articles were put into a research matrix and relevant information was picked out of the article to be used in the literature review.

Each study and article looked at had small sample sizes with no study having over 100 participants. The smallest sample consisted of 18 adolescents and their families (White et al., 2016). The largest sample was from a meta-analysis study that looked at the data of 82 adolescents and their families (Madden et al., 2015). All of the studies had samples that had a majority of female participants. Since adolescents were the focus of the literature review, seven of the eight articles had age ranges of 12 to 18. Only one article extended the definition of adolescent to include 19 and 20-year olds (Herscovici, Kovalskys, & Orellana, 2015).

Two articles did not specify the diagnostic criteria but simply stated they were diagnosed with anorexia nervosa (Ellison et al., 2012) (White et al., 2016). Throughout the articles the participants were fairly similar in age, illness, and length of illness.

Each study used a wide variety of tools to measure effectiveness, track the progress of the participants, and analyze data. Two studies stood out because weight was not measured. Measures included analysis of filmed family meal sessions and generation of their own codes to identify common themes among the different sessions (Godfrey et al., 2014).

The Family Mealtime Coding System which had been modified for use with adolescents (FMCS-A) was also used to measure interactions during family meals (White et al., 2016) (White et al., 2014). The other six studies all looked at weight, either expected body weight (EBW) or ideal body weight (IBW), as a crucial indicator of progress. The Eating Disorder Inventory (EDI) was used to look at the psychological and behavioral aspect of eating disorders as reported by the patient (Ellison et al., 2012) (Herscovici et al., 2015).

Interestingly, majority of the studies did not overlap in the tools they used for assessment. Recruitment and attrition rates, EBW, Therapy Suitability and Patient Expectancy, Eating Disorder Examination, Schedule for Affective Disorders and Schizophrenia for School-Aged Children, Yale-Brown-Cornell Eating Disorder Scale, Children’s Yale-Brown Obsessive-Compulsive Scale, Beck Depression Inventory, helping relationship questionnaire, and Parents Versus Anorexia Nervosa were all used to look at various psychological and physical aspects of the participants (Lock et al., 2015).

Within the eight studies there were common themes linking each study to one another. In two of the studies there was evidence that parental prompts increased food consumption by the patient achieving the goal of the family meal to take one bite more than the patient was willing to take (Godfrey et al., 2014) (White et al., 2014). In two studies, they found that early weight gain in the first few sessions of therapy predicted greater weight gain and higher rates of remission (Madden et al., 2015) (Doyle et al., 2009).

The goal of the literature review was to discover how family meal therapy and family-based treatment effected treatment outcomes of adolescents diagnosed with anorexia nervosa. The results seem to indicate that family-based treatment has a positive effect on the outcomes of adolescents in treatment for anorexia nervosa. The family meal usually went one of two ways either the patient ate all the food in front of them with no problems or the patient had difficulty eating but the parents were able to get their child to complete the food or eat more than the patient was willing to eat (Godfrey et al., 2014).

Overall, utilizing the family of a patient to support and guide them in their recovery had a positive effect on their recovery and ability to achieve remission. Understanding the effects of family-based treatment on patients with anorexia nervosa can impact the way nurses interact with their patients and the patient’s initial plan of care. When a nurse is caring for a client who is hospitalized for medical complications related to anorexia nervosa they can involve the parents as much as possible in the patients care.

There were numerous limitations to this literature review. Mainly the number of articles used was fairly small. A larger sample size of articles could have helped identify more common themes and found more stronger results on the effectiveness of the family meal and family-based treatment. When reading the articles, I noticed there seemed to be a good deal of overlap from one study to another. Either data sets were shared or the articles were citing one another. This is a limitation because it could affect the accuracy of results since it shrinks the sample size even more. Another limitation was the range of how old the articles were. The oldest article was from 2009 and the most recent article was from 2016. That is a seven-year difference between studies as well as an almost ten-year difference from when this literature review was done. Over ten years there have been many changes in technology, research, and viewpoints.

In the future research could be conducted more on the family meal and its specific impact on remission. Also, I think altering the family meal could be researched as well. One could compare the traditional family meal studied in this literature review and compare it to a family meal where the environment is less hostile or the patient has more control over what is eaten by being supported to pick out a meal that follows a healthy meal plan. Control plays a large part in anorexia and looking into the effects of parental and patient control could be beneficial to altering treatment. Future research could also be expanded to look at a larger range of patients as well as a more diverse group of patients. Specifically, a study looking at male adolescents with anorexia nervosa could be useful in tailoring treatment to be more effective for them. One could also research how family-based treatment could work if the patient comes from a nontraditional household for example someone who has foster parents, is being raised by an aunt or uncle, or is being raised by their grandparents.

What I learned from the research process is how difficult it is to find articles pertaining to your topic that are actually measuring what you want to research. You could easily find articles or adolescent anorexia nervosa but it was much harder to find articles that pertained to the family meal. I also learned how you need to be creative with your search terms and essentially use as many words as you can think of that all mean the same thing. Creating this literature review gave me a new respect for those out there actually doing research and contributing to evidence-based healthcare.

An Eating Disorder Doesn’t Come out of Nowhere