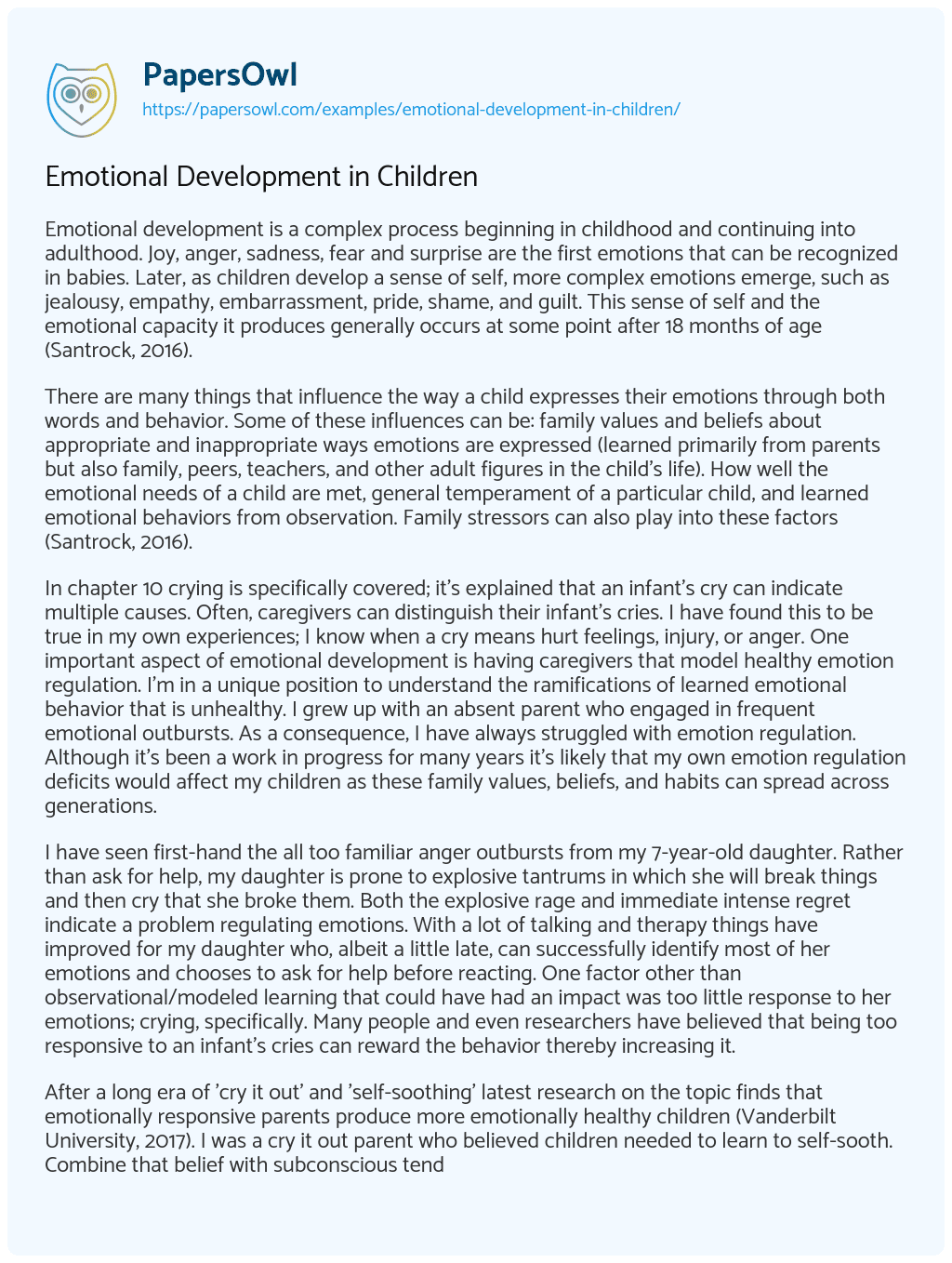 Emotional development is a complex process beginning in childhood and continuing into adulthood. Joy, anger, sadness, fear and surprise are the first emotions that can be recognized in babies. Later, as children develop a sense of self, more complex emotions emerge, such as jealousy, empathy, embarrassment, pride, shame, and guilt. This sense of self and the emotional capacity it produces generally occurs at some point after 18 months of age (Santrock, 2016).

There are many things that influence the way a child expresses their emotions through both words and behavior. Some of these influences can be: family values and beliefs about appropriate and inappropriate ways emotions are expressed (learned primarily from parents but also family, peers, teachers, and other adult figures in the child’s life). How well the emotional needs of a child are met, general temperament of a particular child, and learned emotional behaviors from observation. Family stressors can also play into these factors (Santrock, 2016).

In chapter 10 crying is specifically covered; it’s explained that an infant’s cry can indicate multiple causes. Often, caregivers can distinguish their infant’s cries. I have found this to be true in my own experiences; I know when a cry means hurt feelings, injury, or anger. One important aspect of emotional development is having caregivers that model healthy emotion regulation. I’m in a unique position to understand the ramifications of learned emotional behavior that is unhealthy. I grew up with an absent parent who engaged in frequent emotional outbursts. As a consequence, I have always struggled with emotion regulation. Although it’s been a work in progress for many years it’s likely that my own emotion regulation deficits would affect my children as these family values, beliefs, and habits can spread across generations.

I have seen first-hand the all too familiar anger outbursts from my 7-year-old daughter. Rather than ask for help, my daughter is prone to explosive tantrums in which she will break things and then cry that she broke them. Both the explosive rage and immediate intense regret indicate a problem regulating emotions. With a lot of talking and therapy things have improved for my daughter who, albeit a little late, can successfully identify most of her emotions and chooses to ask for help before reacting. One factor other than observational/modeled learning that could have had an impact was too little response to her emotions; crying, specifically. Many people and even researchers have believed that being too responsive to an infant’s cries can reward the behavior thereby increasing it.

After a long era of ‘cry it out’ and ‘self-soothing’ latest research on the topic finds that emotionally responsive parents produce more emotionally healthy children (Vanderbilt University, 2017). I was a cry it out parent who believed children needed to learn to self-sooth. Combine that belief with subconscious tendencies to avoid big emotions in myself and in others, and we have the perfect storm for developing emotional dysregulation. On the flip side, with my second child I was an older (wiser) mother who consistently responded to cries. I had the awareness to make a concerted effort to validate and ‘name’ emotions. While my son has more developmental challenges than my daughter (both Autistic) interestingly, his emotional development has been much more on par with average children.

Your Behavior Affects your Child’s Development