Benefits of being Bilingual 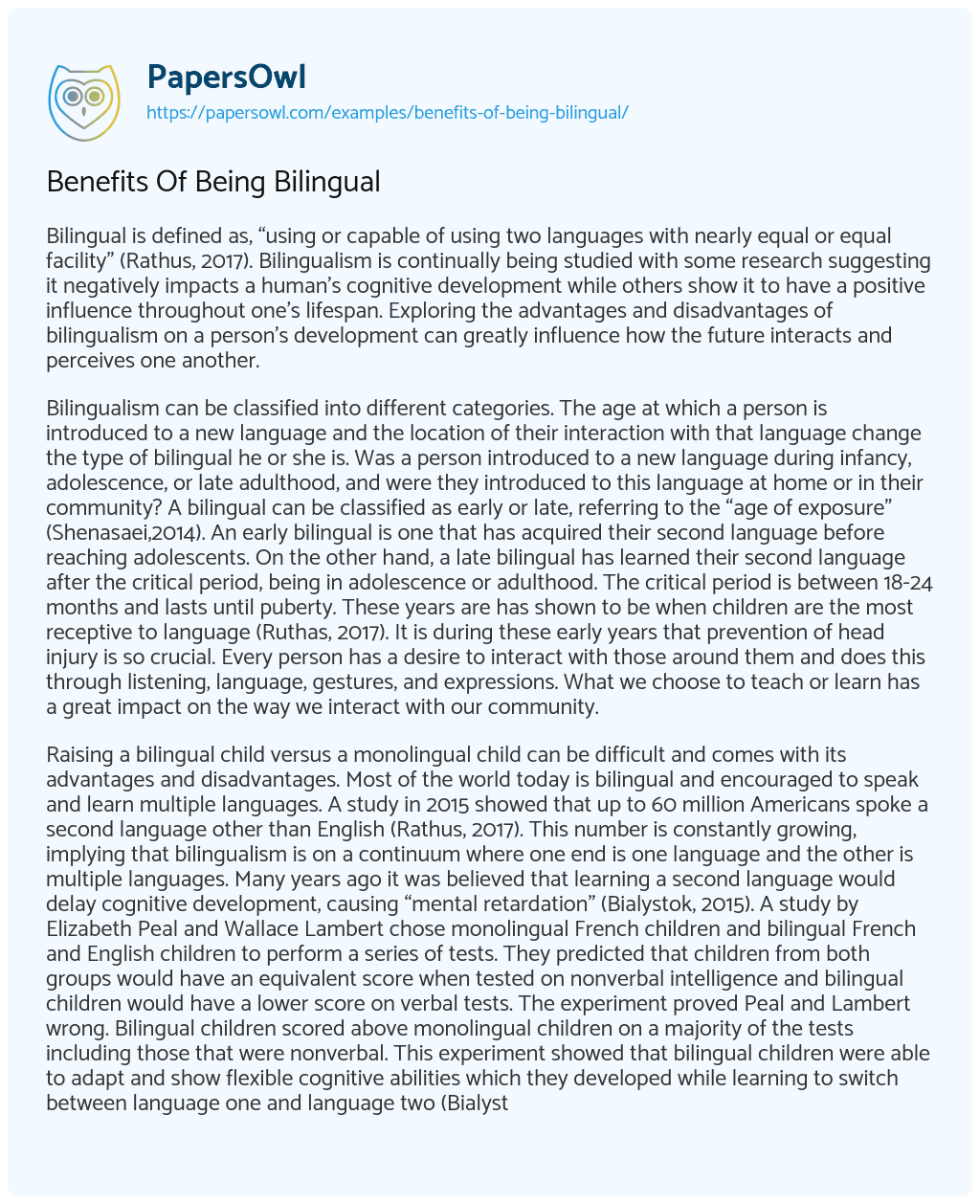 Bilingual is defined as, “using or capable of using two languages with nearly equal or equal facility” (Rathus, 2017). Bilingualism is continually being studied with some research suggesting it negatively impacts a human’s cognitive development while others show it to have a positive influence throughout one’s lifespan. Exploring the advantages and disadvantages of bilingualism on a person’s development can greatly influence how the future interacts and perceives one another.

Bilingualism can be classified into different categories. The age at which a person is introduced to a new language and the location of their interaction with that language change the type of bilingual he or she is. Was a person introduced to a new language during infancy, adolescence, or late adulthood, and were they introduced to this language at home or in their community? A bilingual can be classified as early or late, referring to the “age of exposure” (Shenasaei,2014). An early bilingual is one that has acquired their second language before reaching adolescents. On the other hand, a late bilingual has learned their second language after the critical period, being in adolescence or adulthood. The critical period is between 18-24 months and lasts until puberty. These years are has shown to be when children are the most receptive to language (Ruthas, 2017). It is during these early years that prevention of head injury is so crucial. Every person has a desire to interact with those around them and does this through listening, language, gestures, and expressions. What we choose to teach or learn has a great impact on the way we interact with our community.

Raising a bilingual child versus a monolingual child can be difficult and comes with its advantages and disadvantages. Most of the world today is bilingual and encouraged to speak and learn multiple languages. A study in 2015 showed that up to 60 million Americans spoke a second language other than English (Rathus, 2017). This number is constantly growing, implying that bilingualism is on a continuum where one end is one language and the other is multiple languages. Many years ago it was believed that learning a second language would delay cognitive development, causing “mental retardation” (Bialystok, 2015). A study by Elizabeth Peal and Wallace Lambert chose monolingual French children and bilingual French and English children to perform a series of tests. They predicted that children from both groups would have an equivalent score when tested on nonverbal intelligence and bilingual children would have a lower score on verbal tests. The experiment proved Peal and Lambert wrong. Bilingual children scored above monolingual children on a majority of the tests including those that were nonverbal. This experiment showed that bilingual children were able to adapt and show flexible cognitive abilities which they developed while learning to switch between language one and language two (Bialystok, 2015).

The difference between monolingual and bilingual children can be apparent as early as 7 months of age (Bialystok, 2015). This finding shows a correlation with the importance of facial features to infants. Around this age, they are extremely aware of their environment and their attention is focused on their surroundings. During the 7th month, the infant is going through secondary circular reactions which is one of the sensorimotor stages of Piaget’s cognitive development theory. Infants are beginning to find the similarity between objects and their environment, they are finding that repeated actions have an effect on their surroundings. Cognitive maturation is rapid during infancy and easy to see. An infant’s memory improves drastically quickly and as they get older are more capable of “encoding information, retrieving information already stored, or both” (Ruthas, 2017). During a study by Werker and colleagues infants were presented with a silent video of a face reading in one language. When the infants adapted the video the language was switched and the reading continued. This study showed that bilingual infants noticed the change of language by facial cues alone while monolingual infants did not. This study proposed that “bilingual experiences change the way that attention is directed to the environment.” (Bialystok, 2015).

Other than attempting to introduce a child to a second language during the critical period there are other techniques that aid in a child’s learning. There is a report suggesting that genes have a large influence, up to 50%, on a child’s language learning (Pearson, 2008). A parent’s behavior such as how much they say, who they say it to, how something is said, and what is said influences a child’s ability to grasp the new language. A parent should talk to their child a lot, constant communication is important, not only is a child learning what you’re saying by listening, but they are watching your facial expressions, body language, and movement of the mouth while being spoken to. Parents need to give the children an opportunity to converse, which leaves a lot of listening for the parent or teacher. Listening gives the child a chance to practice. Children need many hours of exposure as well as live interaction with the language to engage and want to explore it. Introducing two languages at birth tends to have a higher success rate of an individual being fluent in both as opposed to waiting to introduce a second language.

Although presenting a second language during the critical period is ideal sometimes that is not a possibility and a new language is introduced or chosen to learn at a later age. A first language is usually learned “naturally and without instruction through loving interaction with their caregivers” therefore choosing to speak another language or choosing to teach one comes with planning (Pearson, 2008).

Benefits Of Being Bilingual. (2021, Jul 01). Retrieved from https://papersowl.com/examples/benefits-of-being-bilingual/

Benefits and Advantages of Studying Abroad

Realization in Life through the Language

The Benefits of the Ketogenic Diet on People with AD