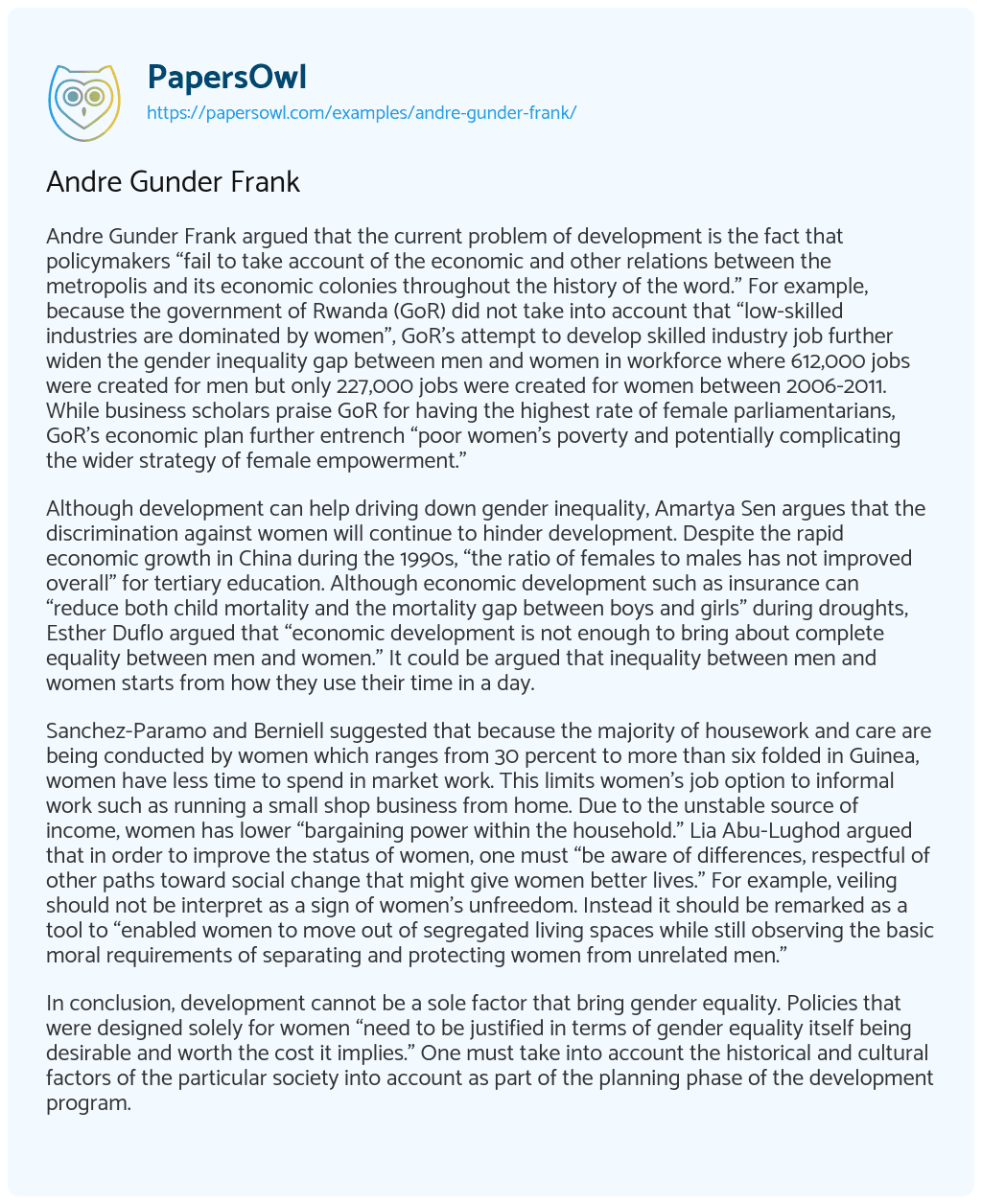 Andre Gunder Frank argued that the current problem of development is the fact that policymakers “fail to take account of the economic and other relations between the metropolis and its economic colonies throughout the history of the word.” For example, because the government of Rwanda (GoR) did not take into account that “low-skilled industries are dominated by women”, GoR’s attempt to develop skilled industry job further widen the gender inequality gap between men and women in workforce where 612,000 jobs were created for men but only 227,000 jobs were created for women between 2006-2011. While business scholars praise GoR for having the highest rate of female parliamentarians, GoR’s economic plan further entrench “poor women’s poverty and potentially complicating the wider strategy of female empowerment.”

Although development can help driving down gender inequality, Amartya Sen argues that the discrimination against women will continue to hinder development. Despite the rapid economic growth in China during the 1990s, “the ratio of females to males has not improved overall” for tertiary education. Although economic development such as insurance can “reduce both child mortality and the mortality gap between boys and girls” during droughts, Esther Duflo argued that “economic development is not enough to bring about complete equality between men and women.” It could be argued that inequality between men and women starts from how they use their time in a day.

Sanchez-Paramo and Berniell suggested that because the majority of housework and care are being conducted by women which ranges from 30 percent to more than six folded in Guinea, women have less time to spend in market work. This limits women’s job option to informal work such as running a small shop business from home. Due to the unstable source of income, women has lower “bargaining power within the household.” Lia Abu-Lughod argued that in order to improve the status of women, one must “be aware of differences, respectful of other paths toward social change that might give women better lives.” For example, veiling should not be interpret as a sign of women’s unfreedom. Instead it should be remarked as a tool to “enabled women to move out of segregated living spaces while still observing the basic moral requirements of separating and protecting women from unrelated men.”

In conclusion, development cannot be a sole factor that bring gender equality. Policies that were designed solely for women “need to be justified in terms of gender equality itself being desirable and worth the cost it implies.” One must take into account the historical and cultural factors of the particular society into account as part of the planning phase of the development program.