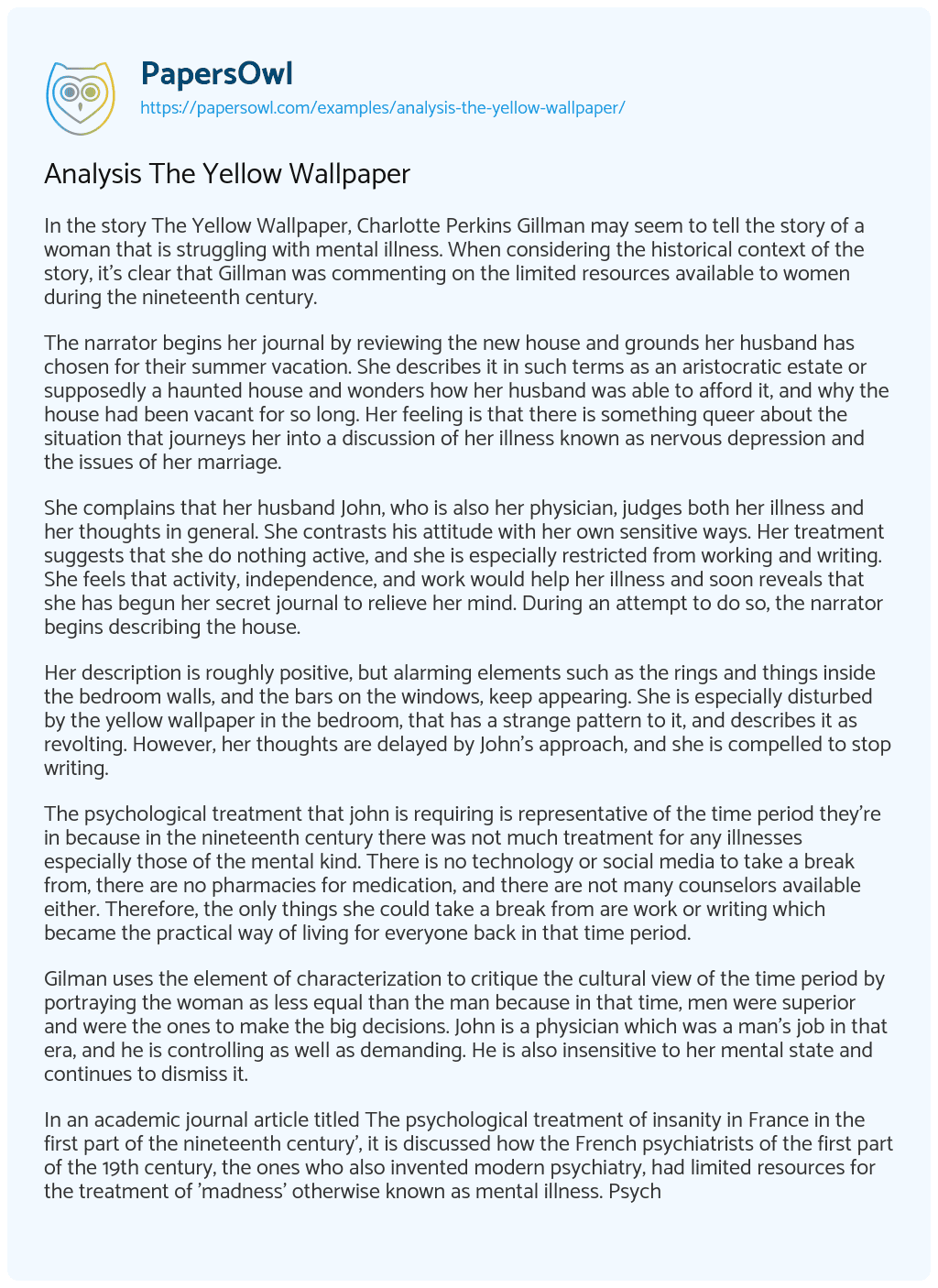 In the story The Yellow Wallpaper, Charlotte Perkins Gillman may seem to tell the story of a woman that is struggling with mental illness. When considering the historical context of the story, it’s clear that Gillman was commenting on the limited resources available to women during the nineteenth century.

The narrator begins her journal by reviewing the new house and grounds her husband has chosen for their summer vacation. She describes it in such terms as an aristocratic estate or supposedly a haunted house and wonders how her husband was able to afford it, and why the house had been vacant for so long. Her feeling is that there is something queer about the situation that journeys her into a discussion of her illness known as nervous depression and the issues of her marriage.

She complains that her husband John, who is also her physician, judges both her illness and her thoughts in general. She contrasts his attitude with her own sensitive ways. Her treatment suggests that she do nothing active, and she is especially restricted from working and writing. She feels that activity, independence, and work would help her illness and soon reveals that she has begun her secret journal to relieve her mind. During an attempt to do so, the narrator begins describing the house.

Her description is roughly positive, but alarming elements such as the rings and things inside the bedroom walls, and the bars on the windows, keep appearing. She is especially disturbed by the yellow wallpaper in the bedroom, that has a strange pattern to it, and describes it as revolting. However, her thoughts are delayed by John’s approach, and she is compelled to stop writing.

The psychological treatment that john is requiring is representative of the time period they’re in because in the nineteenth century there was not much treatment for any illnesses especially those of the mental kind. There is no technology or social media to take a break from, there are no pharmacies for medication, and there are not many counselors available either. Therefore, the only things she could take a break from are work or writing which became the practical way of living for everyone back in that time period.

Gilman uses the element of characterization to critique the cultural view of the time period by portraying the woman as less equal than the man because in that time, men were superior and were the ones to make the big decisions. John is a physician which was a man’s job in that era, and he is controlling as well as demanding. He is also insensitive to her mental state and continues to dismiss it.

In another academic journal titled A Brief History of Psychiatry: Millennia Past and Present’, it is discussed how the release of emotion through an array of means has been healing. All through the centuries several cultures dealt with stresses by providing relief through techniques such as dancing, ritual, religion or confessionals. The idea of experiencing unconscious emotions and their relief through spoken communication became prominent in the 19th-century psychiatric treatments.

The 20th century has seen an immense amount of psychoanalytical, behavioral, and many other psychotherapies. These therapies have been pursued in individuals, groups, or certain relational settings. There have been antagonistic opinions among the various methods of psychotherapy. As we advance into the next century, therapists of all kinds are discovering ways in which certain therapy contributes to healing patients and are characterizing common threads that tie all the approaches to psychotherapy.

In a peer reviewed journal, the cycle of lectures by Igor Borisovitch Grinshpun on the history of psychotherapy are explained. The first part of the lecture conveys the work of American psychologist and philosopher William James. His superior work ‘The Principles of Psychology’ and ‘The Varieties of Religious Experience’ are described and his ideas on conscious thought and personality are studied, and their impact on psychology is traced. The lecture takes on that of a historical background of psychotherapy’s and provides a detailed summary of the significant events of the 19th century, which influenced psychotherapy directly or demonstrated significance to the development of psychotherapy.

Mental illness in the 19th century was excused especially in women because as a home-maker, or wife, you were supposed to act as though the life you were living was picture perfect. If any actions proved otherwise, the entire family would be judged, and the husband’s integrity would be questioned which often led to marriage issues. Communication was not well developed in that time, making relationships of any kind especially complicated. The women that suffered often suffered in silence and due to the fact of treatment being limited, their suffering was eternal. Stress is a number one killer which means the stress that the women endured was sometimes great enough to kill them.

In Gillman’s story, the woman goes mad’ and sees things that would be bizarre to another human being. The narrator uses Jennie, John’s sister, as the housekeeper for the couple. Her presence and her fulfillment with a devoted role aggravate the narrator’s emotions of guilt over her own failure to behave as a traditional wife and mother would. Jennie suspects that the narrator is more troubled than she lets on.
The Yellow Wallpaper is determined by the narrator’s sense that the yellow wallpaper she is witnessing is a text she must clarify, and that it symbolizes something that directly affects her. Therefore, the wallpaper establishes its symbolism throughout the story. At first it seems negative: it is ripped, soiled, and an unclean yellow. The worst part is the seemingly formless pattern, which attracts the narrator as she tries to depict how it is organized. After staring at the paper for far too long, she sees a ghostly pattern which is visible only in certain lighting.

Ultimately, the pattern comes into focus as a desperate woman, crawling and looking for an escape from abaft the main pattern, which resembles the bars of a cage. The narrator sees the cage as crowded with the heads of many women, all of whom were strangled as they attempted to escape. Visibly, the wallpaper represents the structure of family, medicine, and tradition in which the narrator discovers herself trapped. Wallpaper is domestic and humble, and Gilman uses this sadistic, hideous paper as a symbol of the domestic life that traps so many women.

Analysis The Yellow Wallpaper. (2020, May 11). Retrieved from https://papersowl.com/examples/analysis-the-yellow-wallpaper/

The Narrator of the Yellow Wallpaper