Analysis of the Role of the HIF-1 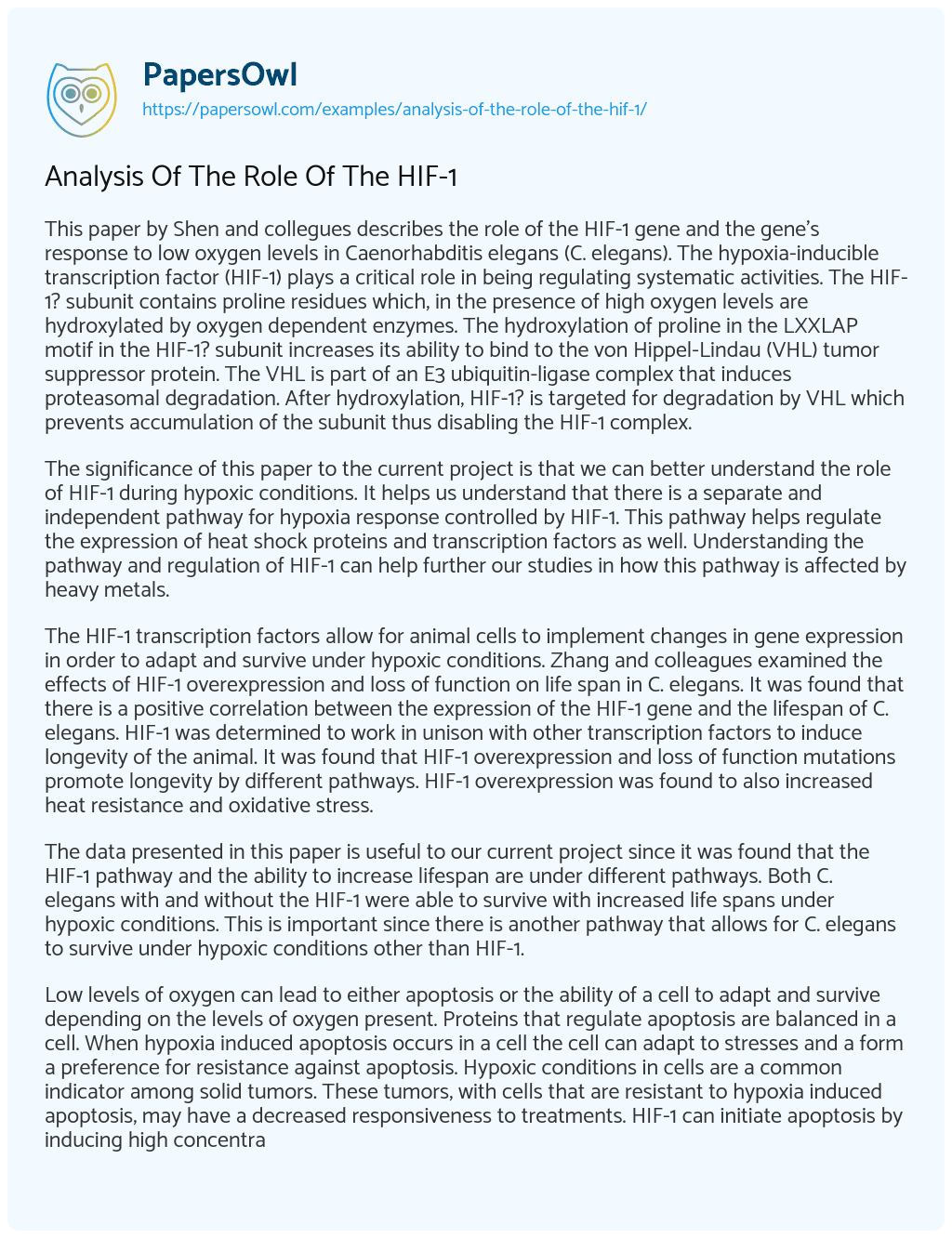 This paper by Shen and collegues describes the role of the HIF-1 gene and the gene’s response to low oxygen levels in Caenorhabditis elegans (C. elegans). The hypoxia-inducible transcription factor (HIF-1) plays a critical role in being regulating systematic activities. The HIF-1? subunit contains proline residues which, in the presence of high oxygen levels are hydroxylated by oxygen dependent enzymes. The hydroxylation of proline in the LXXLAP motif in the HIF-1? subunit increases its ability to bind to the von Hippel-Lindau (VHL) tumor suppressor protein. The VHL is part of an E3 ubiquitin-ligase complex that induces proteasomal degradation. After hydroxylation, HIF-1? is targeted for degradation by VHL which prevents accumulation of the subunit thus disabling the HIF-1 complex.

The significance of this paper to the current project is that we can better understand the role of HIF-1 during hypoxic conditions. It helps us understand that there is a separate and independent pathway for hypoxia response controlled by HIF-1. This pathway helps regulate the expression of heat shock proteins and transcription factors as well. Understanding the pathway and regulation of HIF-1 can help further our studies in how this pathway is affected by heavy metals.

The HIF-1 transcription factors allow for animal cells to implement changes in gene expression in order to adapt and survive under hypoxic conditions. Zhang and colleagues examined the effects of HIF-1 overexpression and loss of function on life span in C. elegans. It was found that there is a positive correlation between the expression of the HIF-1 gene and the lifespan of C. elegans. HIF-1 was determined to work in unison with other transcription factors to induce longevity of the animal. It was found that HIF-1 overexpression and loss of function mutations promote longevity by different pathways. HIF-1 overexpression was found to also increased heat resistance and oxidative stress.

The data presented in this paper is useful to our current project since it was found that the HIF-1 pathway and the ability to increase lifespan are under different pathways. Both C. elegans with and without the HIF-1 were able to survive with increased life spans under hypoxic conditions. This is important since there is another pathway that allows for C. elegans to survive under hypoxic conditions other than HIF-1.

Low levels of oxygen can lead to either apoptosis or the ability of a cell to adapt and survive depending on the levels of oxygen present. Proteins that regulate apoptosis are balanced in a cell. When hypoxia induced apoptosis occurs in a cell the cell can adapt to stresses and a form a preference for resistance against apoptosis. Hypoxic conditions in cells are a common indicator among solid tumors. These tumors, with cells that are resistant to hypoxia induced apoptosis, may have a decreased responsiveness to treatments. HIF-1 can initiate apoptosis by inducing high concentrations of proapoptotic proteins and can thus stabilize p53. During hypoxia antiapoptotic proteins are also induced which can cause proapoptotic proteins to be downregulated thus causing a complicated balance.

Lee, S., A. B. Hwang, and C. Kenyon, 2010. Inhibition of Respiration Extends C. elegans Life Span via Reactive Oxygen Species that increase HIF-1 Activity. Current Biology 20: 2131-2136. At certain lower levels of mitochondrial respirations, it has been shown that many organisms had an extended lifespan. Low levels of oxygen reduce the rate of respiration thus it is possible that other mechanisms that are able to sense such stresses are involved in the increase of lifespan in the response to reduced respiration. HIF-1 is able to activate genes that help cells survive under hypoxic conditions. It was found that when respiration levels were lower in C. elegans, there was an increase in lifespan by the activation of HIF-1. When HIF-1 was activated by inhibiting respiration there were elevated levels of reactive oxygen species. It was found that when reactive oxygen species were increased caused by a decrease in respiration the stimulation of HIF-1 occurred. This stimulation led to HIF-1 to activate gene expression and allow for an increase in longevity.

By being able to understand at what levels of hypoxia HIF-1 is expressed can lead our research to perform different types of experiments at these hypoxic levels. Since it was found that HIF-1 appears to be linked to respiratory stress in the mitochondria to a transcriptional response which increases lifespan, more experiments can be performed to test what levels of hypoxia promote the largest longevity in organisms.

Harada, H., M. Kurauchi, R. Hayashi, and T. Eki, 2006. Shortened Lifespan of Nematode Caenorhabditis elegans after Prolonged Exposure to Heavy Metals and Detergents. Ecotoxicology and Environmental Safety 66:378-383. Toxicity of heavy metals has been examined to increase mortality in several organisms. Tests were performed on C. elegans to determine what long term effects exposure to heavy metals had on the organism and its lifespan. The C. elegans were introduced to long term and short term exposure testing inhibitory effects on reproduction and growth. It was found that these metals were inhibiting the growth of larvae, rate of reproduction and shorting the lifespan of the organisms depending on the concentration of the metals used.

Dietary restriction is shown to extend lifespan and slow the progression of age related diseases in various species. It has also been shown that HIF-1 is a key component of controlling oxygen homeostasis, the formation of tumors, and cell survival among other things. This experiment has found that deficiency of HIF-1 transcription factor results in extended lifespan in C. elegans. The deficiency of HIF-1 lead to the inhibition of the TOR pathway which is an essential part of longevity resulting from dietary restrictions. It was found the HIF-1 can modulate longevity of C. elegans in a nutrient dependant manner. HIF-1 knockout mutations failed to show an increase in longevity under dietary restriction conditions but did show an increase in lifespan under rich nutrient conditions.

Certain metals such as nickel and cobalt are known to mimic the effects of low oxygen levels in organisms. Heavy metals like nickel and cobalt are able to produce a state of oxidative stress and can be used to determine what pathways and cell signaling are regulated by hypoxia inducible gene expression in the presence of low oxygen levels. Since the metals induce oxidative stress, the ROS was thought to trigger the pathway used to signal HIF-1. It was found that when A549 cells were exposed to the heavy metals they produced oxidative stress which caused both metals to produce ROS. The production of ROS leads to the expression of Cap43, a gene that is regulated by hypoxia. When a free radical scavenger 2 mercaptoethanol was used to suppress the generation of ROS, the Cap43 gene expression was still present and not diminished. It was found that although ROS are produced during hypoxic conditions, such as using nickel or cobalt, the formation of ROS was not involved in activating the HIF-1 genes.

Through this research it was found that reactive oxygen species are not a factor in activating HIF-1 transcription factors. The HIF-1 transcription factors have to be turned on by a different pathway rather than ROS which is important to our research to determine what pathway is turned on and how it helps the organism live longer and at what specific concentrations of the heavy metals.