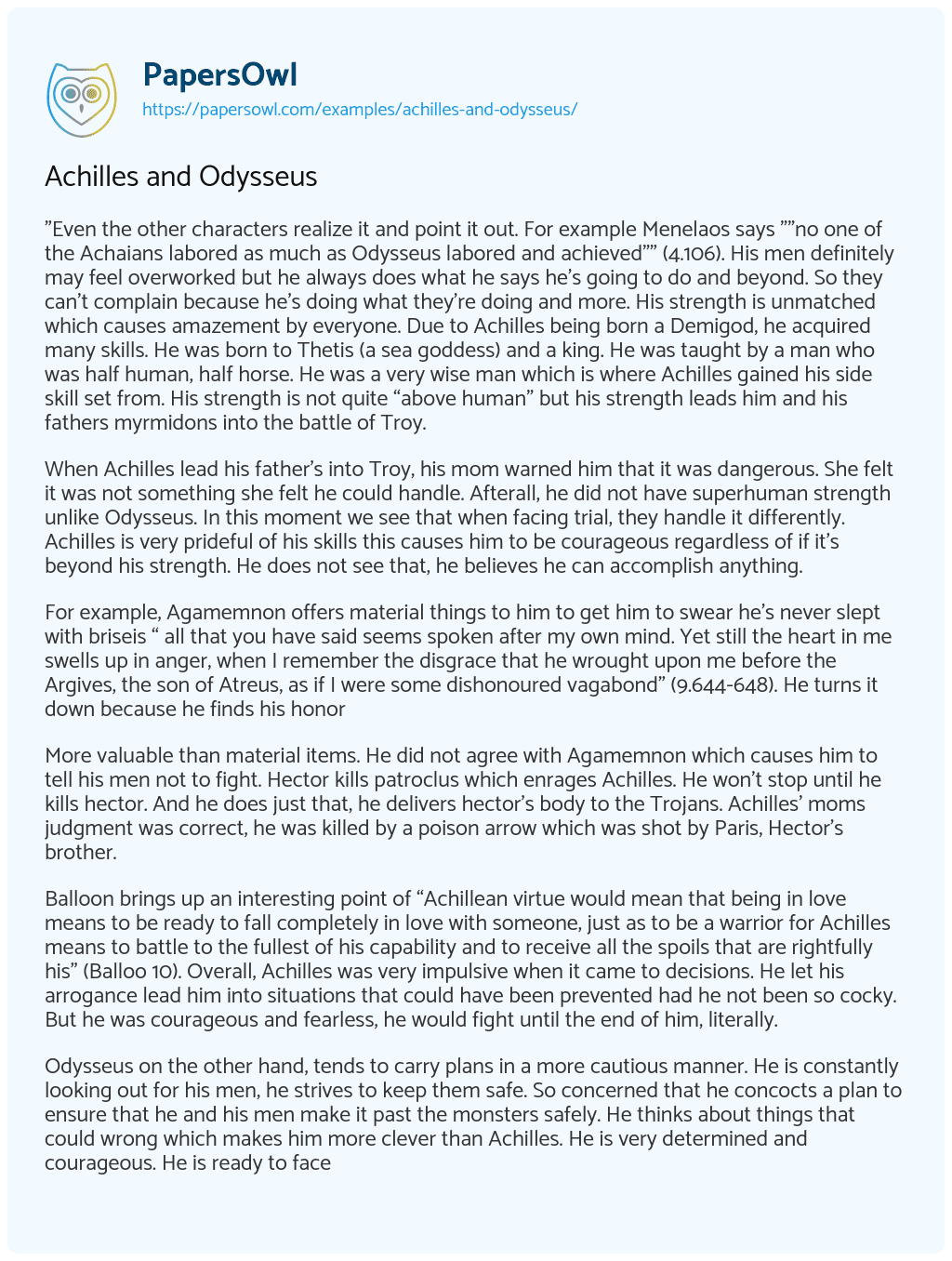 “Even the other characters realize it and point it out. For example Menelaos says “”no one of the Achaians labored as much as Odysseus labored and achieved”” (4.106). His men definitely may feel overworked but he always does what he says he’s going to do and beyond. So they can’t complain because he’s doing what they’re doing and more. His strength is unmatched which causes amazement by everyone. Due to Achilles being born a Demigod, he acquired many skills. He was born to Thetis (a sea goddess) and a king. He was taught by a man who was half human, half horse. He was a very wise man which is where Achilles gained his side skill set from. His strength is not quite “above human” but his strength leads him and his fathers myrmidons into the battle of Troy.

When Achilles lead his father’s into Troy, his mom warned him that it was dangerous. She felt it was not something she felt he could handle. Afterall, he did not have superhuman strength unlike Odysseus. In this moment we see that when facing trial, they handle it differently. Achilles is very prideful of his skills this causes him to be courageous regardless of if it’s beyond his strength. He does not see that, he believes he can accomplish anything.

For example, Agamemnon offers material things to him to get him to swear he’s never slept with briseis “ all that you have said seems spoken after my own mind. Yet still the heart in me swells up in anger, when I remember the disgrace that he wrought upon me before the Argives, the son of Atreus, as if I were some dishonoured vagabond” (9.644-648). He turns it down because he finds his honor

More valuable than material items. He did not agree with Agamemnon which causes him to tell his men not to fight. Hector kills patroclus which enrages Achilles. He won’t stop until he kills hector. And he does just that, he delivers hector’s body to the Trojans. Achilles’ moms judgment was correct, he was killed by a poison arrow which was shot by Paris, Hector’s brother.

Balloon brings up an interesting point of “Achillean virtue would mean that being in love means to be ready to fall completely in love with someone, just as to be a warrior for Achilles means to battle to the fullest of his capability and to receive all the spoils that are rightfully his” (Balloo 10). Overall, Achilles was very impulsive when it came to decisions. He let his arrogance lead him into situations that could have been prevented had he not been so cocky. But he was courageous and fearless, he would fight until the end of him, literally.

Odysseus on the other hand, tends to carry plans in a more cautious manner. He is constantly looking out for his men, he strives to keep them safe. So concerned that he concocts a plan to ensure that he and his men make it past the monsters safely. He thinks about things that could wrong which makes him more clever than Achilles. He is very determined and courageous. He is ready to face any battle but goes about it in a very strategic way. His men know that he will not lead them through something they cannot get through or get harmed during their trial.

He will put himself in danger to prevent his men from encountering danger. Odysseus says “Dear friends, surely we are not unlearned in evils. This is no greater evil now than it was when the Cyclops had us cooped in his hollow cave by force and violence, but even there, by my courage and counsel and my intelligence, we escaped away. I think that all this will be remembered someday too. Then do as I say, let us all be won over””‘ (12.208-213). As they are trapped in the cave with the giant, he motivates his men with a few encouraging words. It shows leadership and his fearlessness will rub off on his men and notify them that odysseus will come a way out of

their situation. He utilized his heroic power like strength and intellect by escaping dangerous situations. Although he has all these virtuous qualities, he is a bit stubborn and can come off a little arrogant as well. In A Socio-Cultural Study of the Odyssey by Homer and the Odyssey by Usman Ali: A Comparative Analysis it states, “The Odyssey, Odysseus boasts and makes fun of Polyphemus and Cyclops, the goddess of silence, strange power and beauty, who kills his men.

In Book 9, Odysseus yells across the water to Polyphemus: “O, Cyclops! Would you feast on my companions to Polyphemus? How do you like the beating that we gave you, you damned cannibal (Homer, l.390-394). Cyclops calls on Poseidon to punish Odysseus. Homer explains that Odysseus’ further delay is caused by Poseidon” (Musarrat, Adnan, & khalil 18). This shows he was being boastful which led to the delay of his mission.

The two hero’s share various traits but they also differ in many ways. Achilles is way more arrogant and impulsive while odysseus manages to keep his cool most of the time. Homer displays heroic traits in both characters through different stories, both characters face trial yet handle them differently. Both characters are forced to be brave and courageous when faced with other powerful beings for the sake of themselves and other men. They seem very different but when the layers are peeled back, they are more similar than what it seems.”