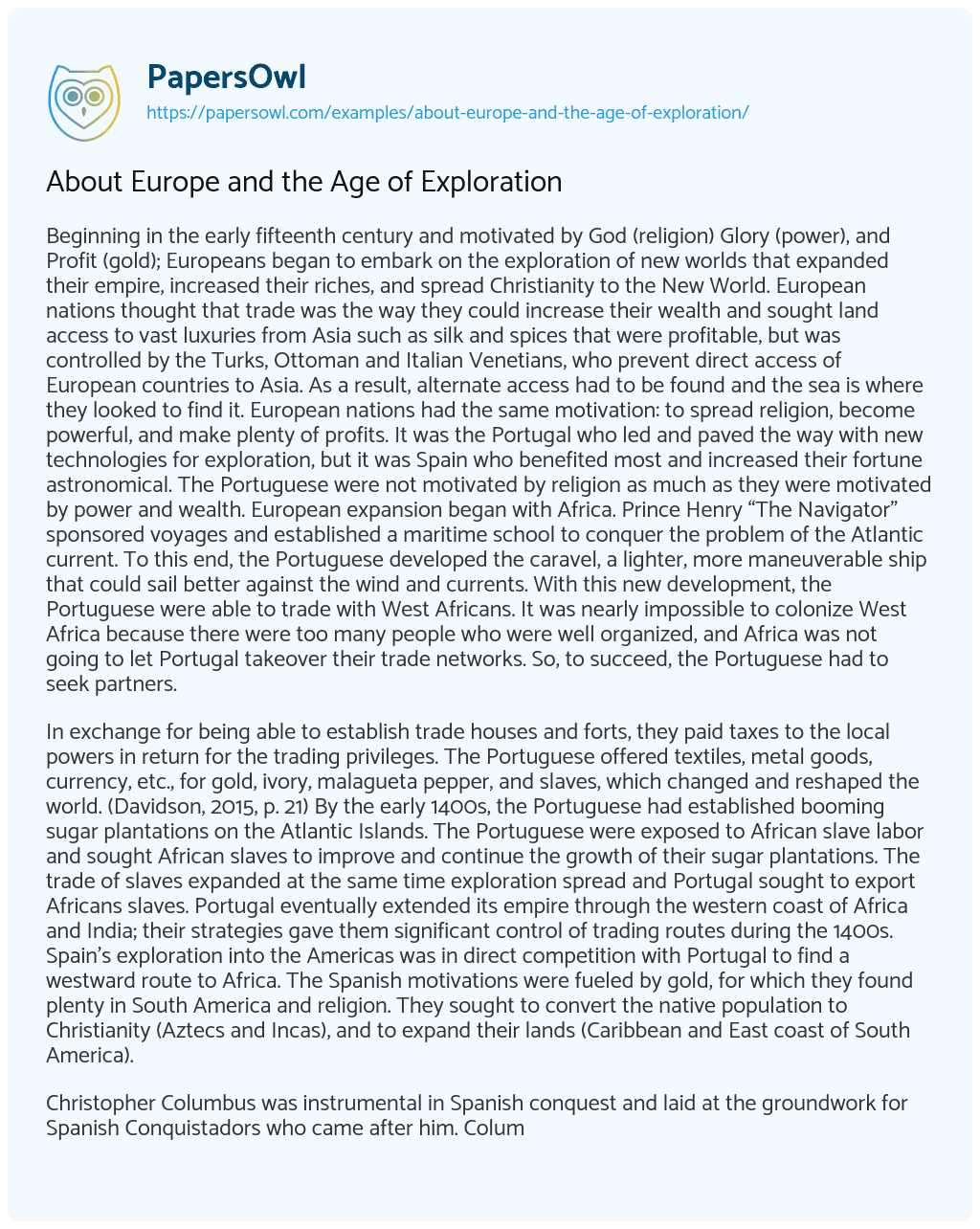 Beginning in the early fifteenth century and motivated by God (religion) Glory (power), and Profit (gold); Europeans began to embark on the exploration of new worlds that expanded their empire, increased their riches, and spread Christianity to the New World. European nations thought that trade was the way they could increase their wealth and sought land access to vast luxuries from Asia such as silk and spices that were profitable, but was controlled by the Turks, Ottoman and Italian Venetians, who prevent direct access of European countries to Asia. As a result, alternate access had to be found and the sea is where they looked to find it. European nations had the same motivation: to spread religion, become powerful, and make plenty of profits. It was the Portugal who led and paved the way with new technologies for exploration, but it was Spain who benefited most and increased their fortune astronomical. The Portuguese were not motivated by religion as much as they were motivated by power and wealth. European expansion began with Africa. Prince Henry “The Navigator” sponsored voyages and established a maritime school to conquer the problem of the Atlantic current. To this end, the Portuguese developed the caravel, a lighter, more maneuverable ship that could sail better against the wind and currents. With this new development, the Portuguese were able to trade with West Africans. It was nearly impossible to colonize West Africa because there were too many people who were well organized, and Africa was not going to let Portugal takeover their trade networks. So, to succeed, the Portuguese had to seek partners.

In exchange for being able to establish trade houses and forts, they paid taxes to the local powers in return for the trading privileges. The Portuguese offered textiles, metal goods, currency, etc., for gold, ivory, malagueta pepper, and slaves, which changed and reshaped the world. (Davidson, 2015, p. 21) By the early 1400s, the Portuguese had established booming sugar plantations on the Atlantic Islands. The Portuguese were exposed to African slave labor and sought African slaves to improve and continue the growth of their sugar plantations. The trade of slaves expanded at the same time exploration spread and Portugal sought to export Africans slaves. Portugal eventually extended its empire through the western coast of Africa and India; their strategies gave them significant control of trading routes during the 1400s. Spain’s exploration into the Americas was in direct competition with Portugal to find a westward route to Africa. The Spanish motivations were fueled by gold, for which they found plenty in South America and religion. They sought to convert the native population to Christianity (Aztecs and Incas), and to expand their lands (Caribbean and East coast of South America).

Christopher Columbus was instrumental in Spanish conquest and laid at the groundwork for Spanish Conquistadors who came after him. Columbus who thought the shortest route to China was across the Atlantic Ocean and convinced Spanish monarchs, Ferdinand and Isabella that a westward route to Asia would allow Spain to compete with Portugal and generate revenue to continue their military reconquest of territories. With support from Spain, Columbus set out his first voyage across the Atlantic. He thought he landed on India, but actually, it was the present-day Bahamas. He later sailed to present-day Haiti and the Dominican Republic (Hispaniola). Columbus’ encounter with the Native people was nothing like the Portuguese encounters with chiefdoms in Africa. The people were very welcoming. He called the Taino people Indians -inhabitants of the Indies. Unlike the Portuguese who saw the Natives as partners, during almost a decade, Spaniards colonizer were a brutal regime on the Taino’s race, killing native chiefs and obligating “and forcing survivors to toil in mines and fields” (Davidson, 2015, p.22). The Spanish conquistadors took over areas of Central and South America looking for gold. In the end, they destroyed some of the most advanced and civilization that developed in the Americas, the Aztec and Incas cultures. Although the Aztec were friendly and showed their kindness with gifts of gold, Cortes conquered their leader Montezuma and people. This is a demonstration of one of many Native American slayings on the grounds of European greed.

Where there is gold, glory can often be found, because gold is not just handed out it must be strategically obtained. There were major settlement patterns between the countries during the Age of Exploration. With support from Spanish monarch, conquistadors were able to go on their conquests and gained riches for Spain that expanded its empire. While English gave royal charters to settlers who were recruited from among middle-class farmers, artisans, and tradesmen. Some came as indentured servants, silversmiths, and convicted criminals. All seemed to be welcomed. Whereas, most of the population were conquistadores, soldiers, and missionaries were the primary Spanish colonizers; farmers and traders came later. Religion was also a subject of vast controversy as the Spanish’s primary goal was to expand their Catholic beliefs to the new world. Spanish missionaries saw Native Americans as pagans that need to turn away from their religion and embrace Christianity. They went to great lengths to instill them into the Native’s so much so as to persecute them if not obeyed. The English, mostly non-Catholics were more tolerant of religious freedom as they were prosecuted themselves. As they settled in, The Spanish colonies were ruled by assigned governors and inhabitants were to fully implement the royal family’s orders. The opposite was true for the English, who were so distanced from England and allowed to set up local governments and representative assemblies and to tax themselves, as long as they did not try to rebel and overthrow the crown. (Chris 2012)

The difference between these two colonies deeply affected the population growth as the Spanish struggled to survive because of greater emphasis on military conquest, a slow development as the poor treatment to native’s, and numerous early failures drove did not grant them any advantages for permanent settlements. (European Colonization of the Americas). The English were quite successful. Initially, they were friendly with the Native Americans because they relied on Native American for trade and for help with survival. Eventually, greed for land led to major conflicts with the Native Americans. The economies were also different from the Spanish having largely a trading economy; some farming in the West. Commerce was controlled by the Spanish trade boards and the military was responsible for enforcing the rules. On the contrary, English had diverse economic activities included farming, fishing, and trading. Exports included tobacco, rice, timber, and fish. Tobacco was the main crop of profit in the Virginia and North Carolina colonies. In conclusion, the Age of Exploration was a time Europeans began dominating the world by settling up colonies in Africa, the Caribbean, and the Americas. They wanted to explore and conquer new lands and find riches to expand their empire. They were motivated by the desire for glory, the need to spread their religious beliefs and a longing for gold. However, they did not think of the impact it made on an entire group of people who were already thriving on these new lands.

About Europe and the Age of Exploration. (2021, Mar 01). Retrieved from https://papersowl.com/examples/about-europe-and-the-age-of-exploration/

The Exploration Age in Europe