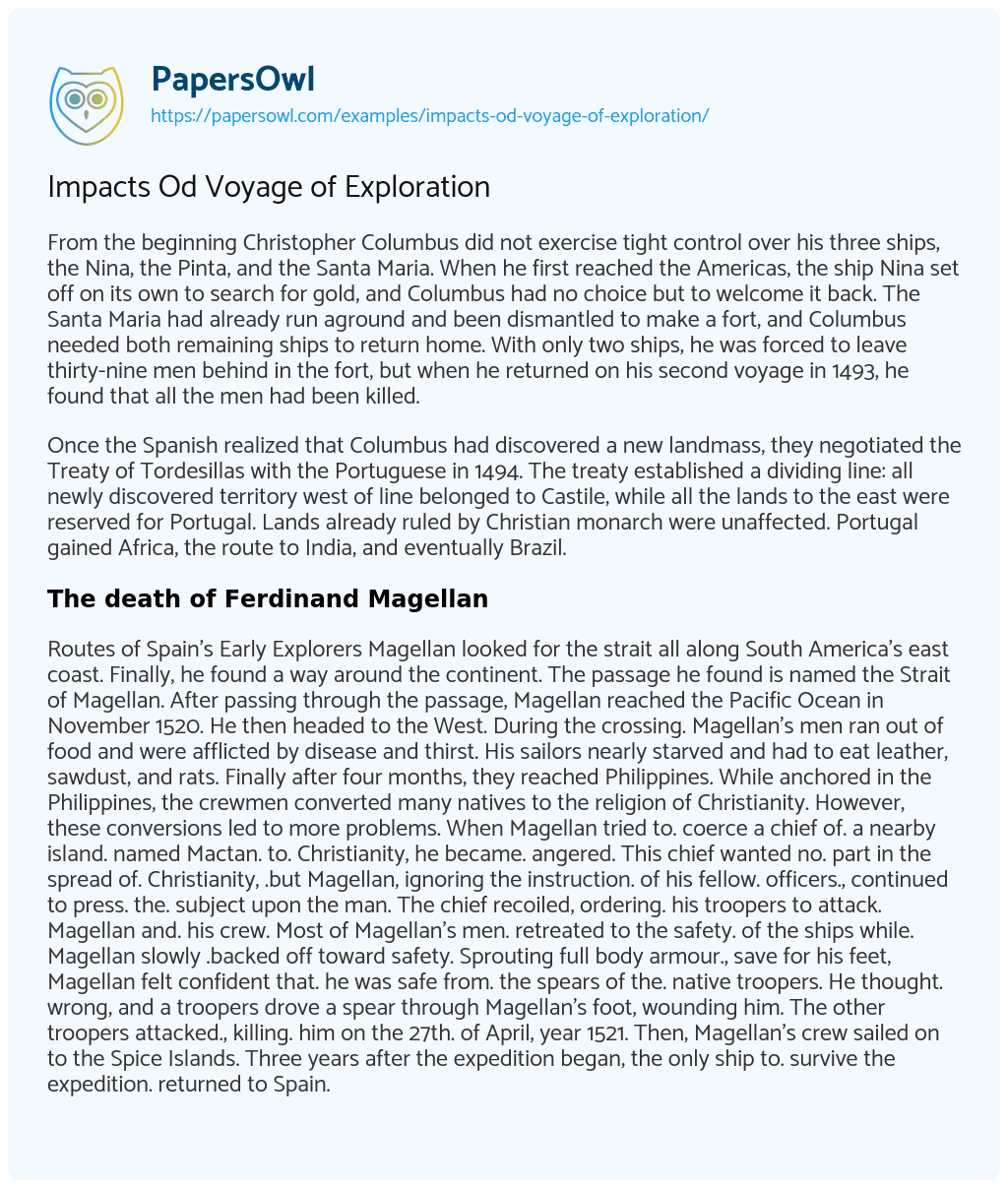 From the beginning Christopher Columbus did not exercise tight control over his three ships, the Nina, the Pinta, and the Santa Maria. When he first reached the Americas, the ship Nina set off on its own to search for gold, and Columbus had no choice but to welcome it back. The Santa Maria had already run aground and been dismantled to make a fort, and Columbus needed both remaining ships to return home. With only two ships, he was forced to leave thirty-nine men behind in the fort, but when he returned on his second voyage in 1493, he found that all the men had been killed.

Once the Spanish realized that Columbus had discovered a new landmass, they negotiated the Treaty of Tordesillas with the Portuguese in 1494. The treaty established a dividing line: all newly discovered territory west of line belonged to Castile, while all the lands to the east were reserved for Portugal. Lands already ruled by Christian monarch were unaffected. Portugal gained Africa, the route to India, and eventually Brazil.

The death of Ferdinand Magellan

Routes of Spain’s Early Explorers Magellan looked for the strait all along South America’s east coast. Finally, he found a way around the continent. The passage he found is named the Strait of Magellan. After passing through the passage, Magellan reached the Pacific Ocean in November 1520. He then headed to the West. During the crossing. Magellan’s men ran out of food and were afflicted by disease and thirst. His sailors nearly starved and had to eat leather, sawdust, and rats. Finally after four months, they reached Philippines. While anchored in the Philippines, the crewmen converted many natives to the religion of Christianity. However, these conversions led to more problems. When Magellan tried to. coerce a chief of. a nearby island. named Mactan. to. Christianity, he became. angered. This chief wanted no. part in the spread of. Christianity, .but Magellan, ignoring the instruction. of his fellow. officers., continued to press. the. subject upon the man. The chief recoiled, ordering. his troopers to attack. Magellan and. his crew. Most of Magellan’s men. retreated to the safety. of the ships while. Magellan slowly .backed off toward safety. Sprouting full body armour., save for his feet, Magellan felt confident that. he was safe from. the spears of the. native troopers. He thought. wrong, and a troopers drove a spear through Magellan’s foot, wounding him. The other troopers attacked., killing. him on the 27th. of April, year 1521. Then, Magellan’s crew sailed on to the Spice Islands. Three years after the expedition began, the only ship to. survive the expedition. returned to Spain.