Youth and Different Factors of Aggression 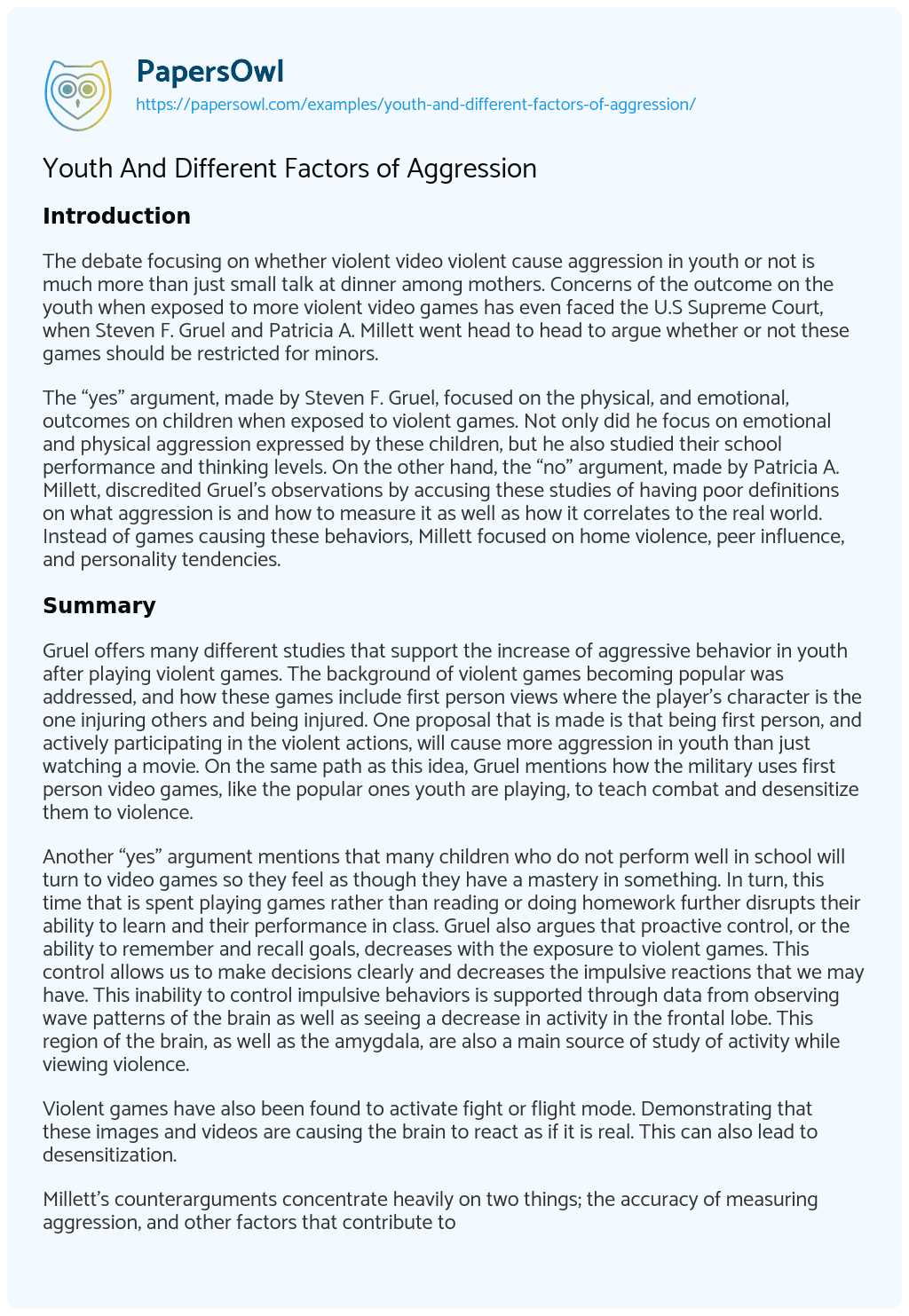 The debate focusing on whether violent video violent cause aggression in youth or not is much more than just small talk at dinner among mothers. Concerns of the outcome on the youth when exposed to more violent video games has even faced the U.S Supreme Court, when Steven F. Gruel and Patricia A. Millett went head to head to argue whether or not these games should be restricted for minors.

The “yes” argument, made by Steven F. Gruel, focused on the physical, and emotional, outcomes on children when exposed to violent games. Not only did he focus on emotional and physical aggression expressed by these children, but he also studied their school performance and thinking levels. On the other hand, the “no” argument, made by Patricia A. Millett, discredited Gruel’s observations by accusing these studies of having poor definitions on what aggression is and how to measure it as well as how it correlates to the real world. Instead of games causing these behaviors, Millett focused on home violence, peer influence, and personality tendencies.

Gruel offers many different studies that support the increase of aggressive behavior in youth after playing violent games. The background of violent games becoming popular was addressed, and how these games include first person views where the player’s character is the one injuring others and being injured. One proposal that is made is that being first person, and actively participating in the violent actions, will cause more aggression in youth than just watching a movie. On the same path as this idea, Gruel mentions how the military uses first person video games, like the popular ones youth are playing, to teach combat and desensitize them to violence.

Another “yes” argument mentions that many children who do not perform well in school will turn to video games so they feel as though they have a mastery in something. In turn, this time that is spent playing games rather than reading or doing homework further disrupts their ability to learn and their performance in class. Gruel also argues that proactive control, or the ability to remember and recall goals, decreases with the exposure to violent games. This control allows us to make decisions clearly and decreases the impulsive reactions that we may have. This inability to control impulsive behaviors is supported through data from observing wave patterns of the brain as well as seeing a decrease in activity in the frontal lobe. This region of the brain, as well as the amygdala, are also a main source of study of activity while viewing violence.

Violent games have also been found to activate fight or flight mode. Demonstrating that these images and videos are causing the brain to react as if it is real. This can also lead to desensitization.

Millett’s counterarguments concentrate heavily on two things; the accuracy of measuring aggression, and other factors that contribute to aggression. Counting one of Gruel’s main points, that children who play more violent video games have lower performance in school, Millett mentions that students who play games instead of studying are usually already not doing well in school due to other factors, such as negative peer pressure or at home violence. She also argues that the methods of measuring aggression, such as asking children when they were last in a fight or argued with teachers, is not a valid measurement. These instances could have happened due to outside enforcers, and therefore are not valid. Millett also mentions that the “meta-analysis” is based off of the results of previous observations and experiments, which are not reliable, and therefore any studies done using them are also invalid and unreliable. Many of Millett’s arguments show strong evidence of debunking the studies of Gruel, including other factors into the studies to show that this issue is fluid.

Millett, on the other hand, first addresses the data that supports violent games enforcing aggression in youth and then gives reasons why it is not reliable. She then goes on to give more examples of experiments supporting her claims, and continuing to counter Gruel’s. Because of this, it is harder to find gaps in Millett’s argument, thus making it feel more reliable and secure. The unclear measurements by the experiments Gruel mentions, as well as the inconsistency of factors that could be causing outlashes of aggression in the youth, leave room for discussion and possible debunking.

Throughout my time as a student, I have witnessed many students who exhibit aggressive behaviors, and they are usually not directly linked with video games. Many of these students were using drugs, were from low income families, or were even stuck in abusive relationships. These other factors may not only drive violent behavior, but also as their grades and social decency may drop, they may turn to other releases, such as video games, drugs, or violent behavior. Many people that I’ve witnessed stuck in an abusive relationship, whether family, romantic, or other, seem to learn behaviors from the abuser. There are many other day to factors that can influence someone’s actions, but I believe other people in our lives most effectively change who we are and rub off on us.

Youth who are exposed to different factors of aggression, including peer pressure, home violence, lack of parental involvement, mental tendencies of each child, etc. are more likely to show aggression and have a slight tendency to turn to violent games as an outlet. Although there is some data pointing to changes in brain activity when exposed to violence, this correlation has no sound conclusions and does not mean that this brain activity will lead to aggressive behavior.

These studies have helped shine light on how easily persuaded human thought and behavior is, whether one factor makes us more violent or not. Even if violent video games are not enough to affect the behavior and make it more aggressive, they can certainly influence it when in the right conditions.

Youth And Different Factors of Aggression. (2021, Feb 27). Retrieved from https://papersowl.com/examples/youth-and-different-factors-of-aggression/