Why is Stealing Wrong 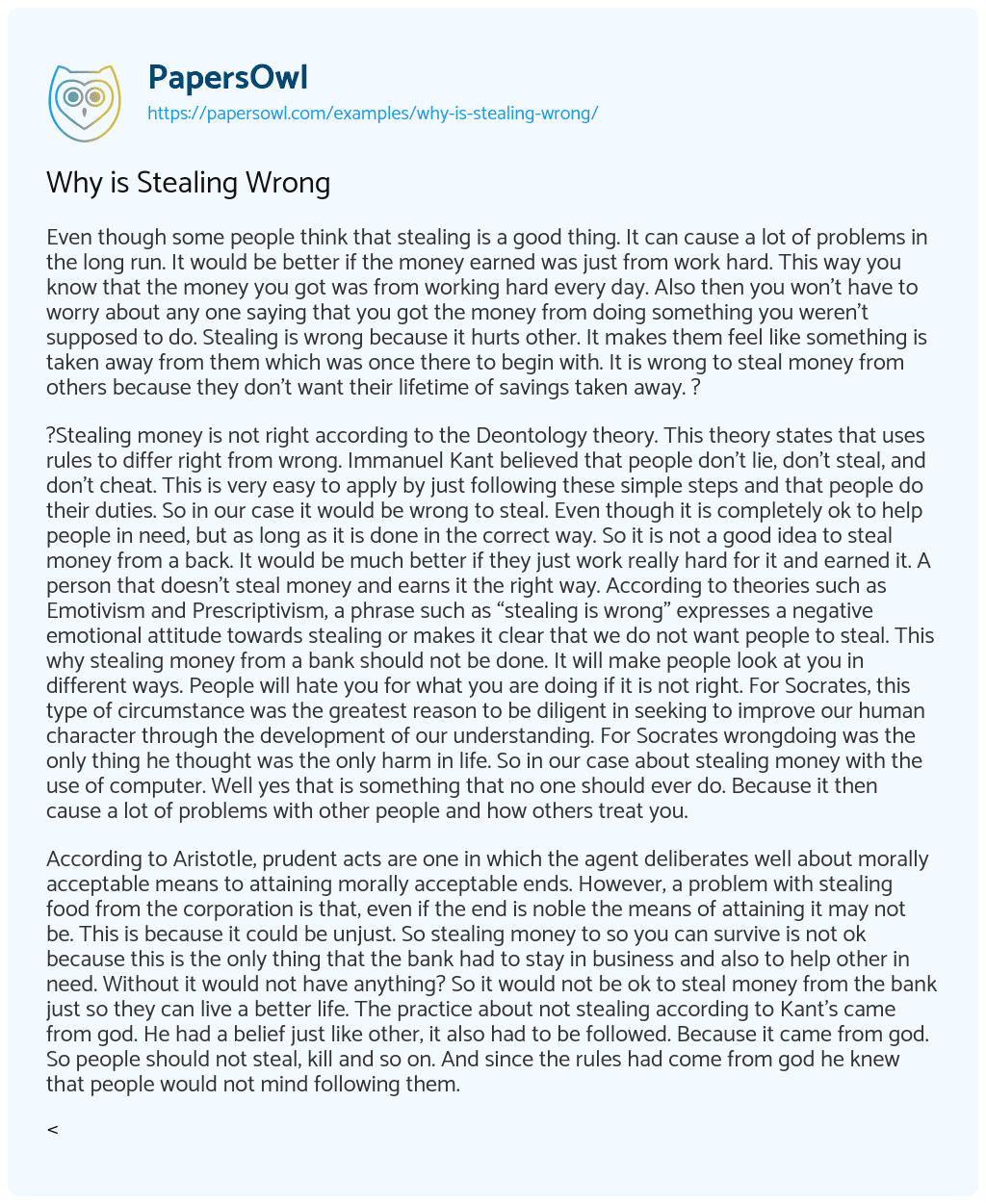 Even though some people think that stealing is a good thing. It can cause a lot of problems in the long run. It would be better if the money earned was just from work hard. This way you know that the money you got was from working hard every day. Also then you won’t have to worry about any one saying that you got the money from doing something you weren’t supposed to do. Stealing is wrong because it hurts other. It makes them feel like something is taken away from them which was once there to begin with. It is wrong to steal money from others because they don’t want their lifetime of savings taken away. ?

?Stealing money is not right according to the Deontology theory. This theory states that uses rules to differ right from wrong. Immanuel Kant believed that people don’t lie, don’t steal, and don’t cheat. This is very easy to apply by just following these simple steps and that people do their duties. So in our case it would be wrong to steal. Even though it is completely ok to help people in need, but as long as it is done in the correct way. So it is not a good idea to steal money from a back. It would be much better if they just work really hard for it and earned it. A person that doesn’t steal money and earns it the right way. According to theories such as Emotivism and Prescriptivism, a phrase such as “stealing is wrong” expresses a negative emotional attitude towards stealing or makes it clear that we do not want people to steal. This why stealing money from a bank should not be done. It will make people look at you in different ways. People will hate you for what you are doing if it is not right. For Socrates, this type of circumstance was the greatest reason to be diligent in seeking to improve our human character through the development of our understanding. For Socrates wrongdoing was the only thing he thought was the only harm in life. So in our case about stealing money with the use of computer. Well yes that is something that no one should ever do. Because it then cause a lot of problems with other people and how others treat you.

According to Aristotle, prudent acts are one in which the agent deliberates well about morally acceptable means to attaining morally acceptable ends. However, a problem with stealing food from the corporation is that, even if the end is noble the means of attaining it may not be. This is because it could be unjust. So stealing money to so you can survive is not ok because this is the only thing that the bank had to stay in business and also to help other in need. Without it would not have anything? So it would not be ok to steal money from the bank just so they can live a better life. The practice about not stealing according to Kant’s came from god. He had a belief just like other, it also had to be followed. Because it came from god. So people should not steal, kill and so on. And since the rules had come from god he knew that people would not mind following them.

Even though there is a guarantee of getting away with stealing money from a back. It should still not be done. Because sooner or later it will come back to you in the thinking process of why did we make that choice in the first place? So it would be better if we just follow ethics the right way and not do it. An article called “Family seeks stolen iPad with photos of deceased father” explained how small things in life can hurt so many people in different ways. Just like the child in this article had his iPad stolen just after a few days after his father had passed away. He was upset that he had all the last photos of his dad on it and he just wanted the photos back. Just like someone taking our hard earned money from us for their own good is not a good thing to do.

Now a day’s computer are used to get almost everything done. So it keep a lot of data that you think it doesn’t. Like for example name, email, phone number, address, bank account and so much more. Even though computer keep this thing it is not ok to search others information and try to take their belongings from them. I certainly would not use a computer or any kind of technology to steal money at all. Because money should be made by working hard and mind. Not by just taking others money from them. Let just face it stealing is completely wrong no matter what you steal rather it be a piece of paper from a friend or money from the bank it is just wrong.

Why is Stealing Wrong. (2021, May 10). Retrieved from https://papersowl.com/examples/why-is-stealing-wrong/

Ethics and Sexual Harassment: why is it Wrong

Why Abortion is Wrong