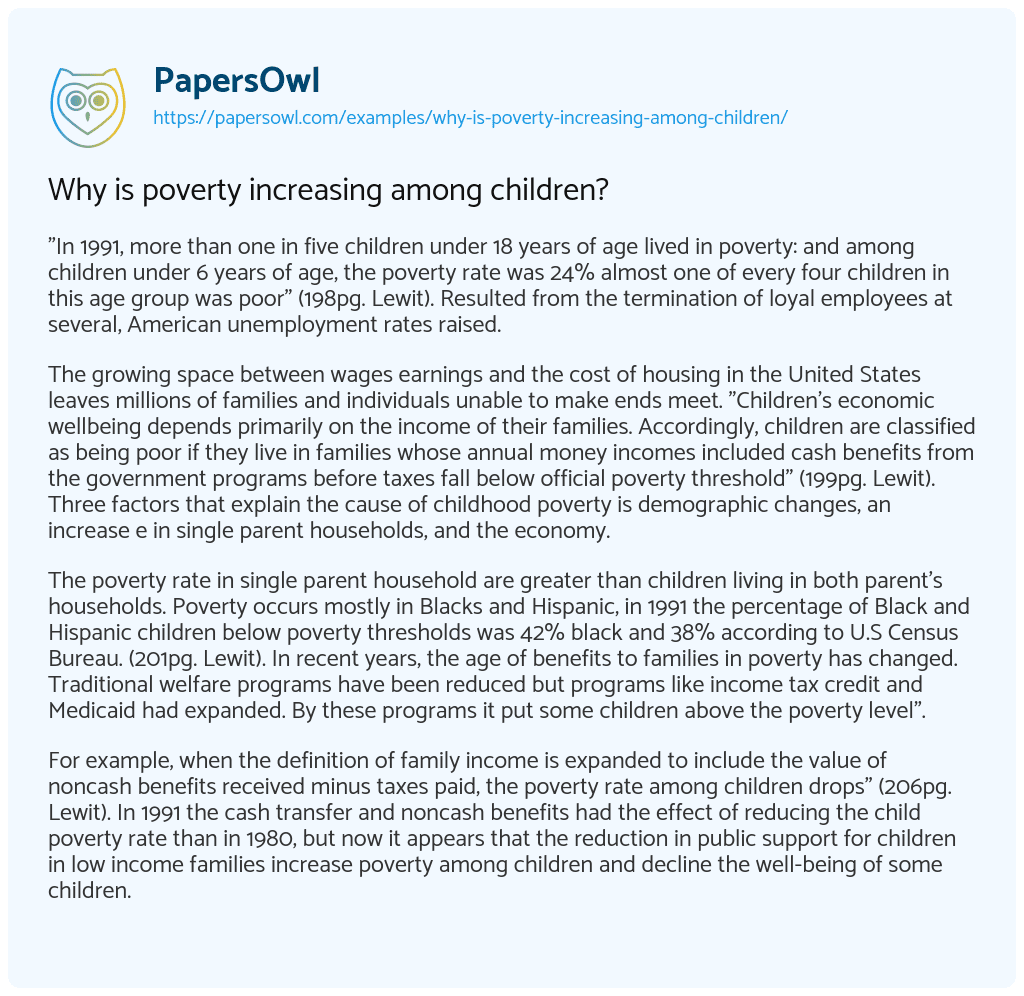 “In 1991, more than one in five children under 18 years of age lived in poverty: and among children under 6 years of age, the poverty rate was 24% almost one of every four children in this age group was poor” (198pg. Lewit). Resulted from the termination of loyal employees at several, American unemployment rates raised.

The growing space between wages earnings and the cost of housing in the United States leaves millions of families and individuals unable to make ends meet. “Children’s economic wellbeing depends primarily on the income of their families. Accordingly, children are classified as being poor if they live in families whose annual money incomes included cash benefits from the government programs before taxes fall below official poverty threshold” (199pg. Lewit). Three factors that explain the cause of childhood poverty is demographic changes, an increase e in single parent households, and the economy.

The poverty rate in single parent household are greater than children living in both parent’s households. Poverty occurs mostly in Blacks and Hispanic, in 1991 the percentage of Black and Hispanic children below poverty thresholds was 42% black and 38% according to U.S Census Bureau. (201pg. Lewit). In recent years, the age of benefits to families in poverty has changed. Traditional welfare programs have been reduced but programs like income tax credit and Medicaid had expanded. By these programs it put some children above the poverty level”.

For example, when the definition of family income is expanded to include the value of noncash benefits received minus taxes paid, the poverty rate among children drops” (206pg. Lewit). In 1991 the cash transfer and noncash benefits had the effect of reducing the child poverty rate than in 1980, but now it appears that the reduction in public support for children in low income families increase poverty among children and decline the well-being of some children.

Why is poverty increasing among children?. (2019, Sep 25). Retrieved from https://papersowl.com/examples/why-is-poverty-increasing-among-children/

Children of Poverty in the U.S.

Poverty in Sub-Saharan Women and Children