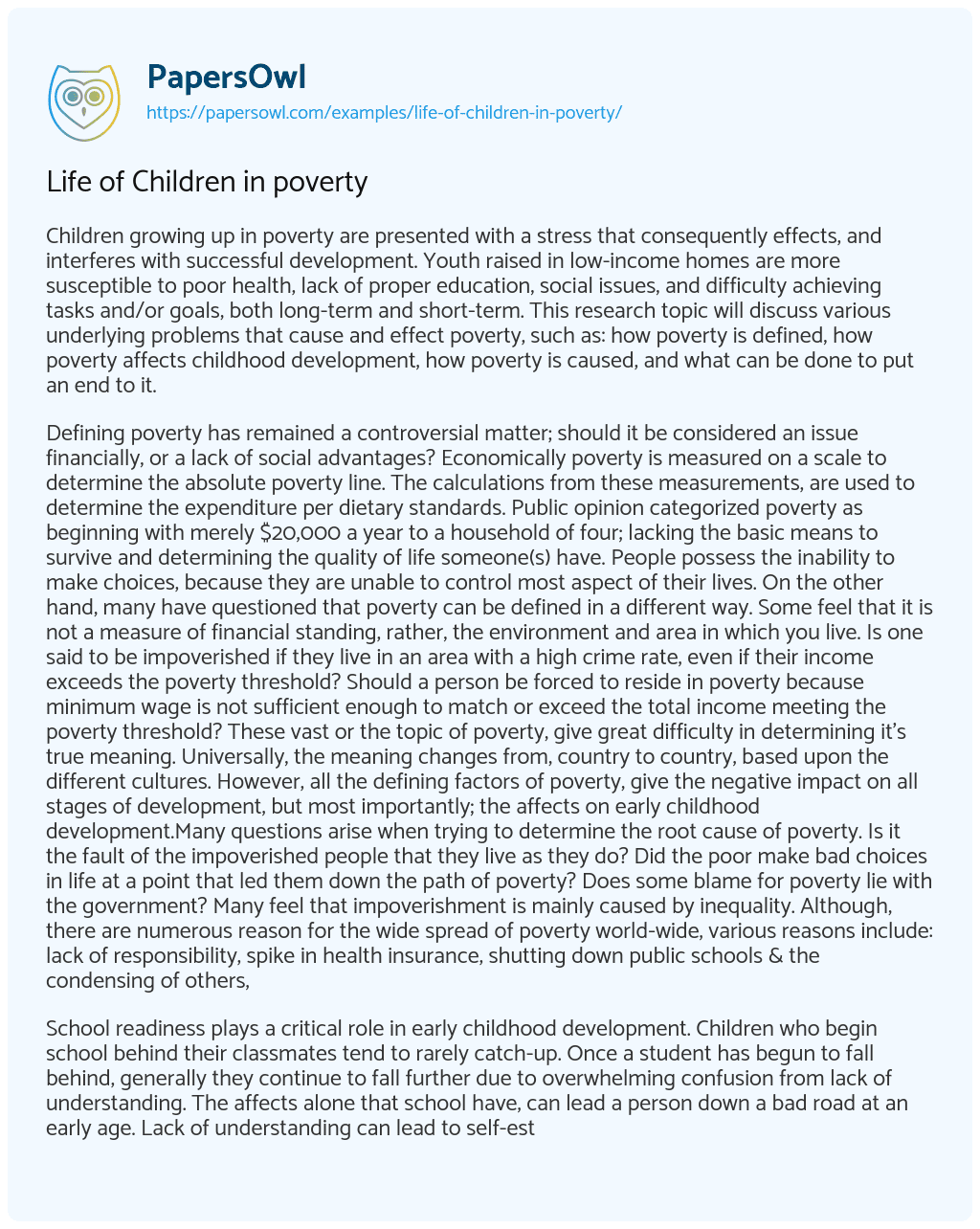 Children growing up in poverty are presented with a stress that consequently effects, and interferes with successful development. Youth raised in low-income homes are more susceptible to poor health, lack of proper education, social issues, and difficulty achieving tasks and/or goals, both long-term and short-term. This research topic will discuss various underlying problems that cause and effect poverty, such as: how poverty is defined, how poverty affects childhood development, how poverty is caused, and what can be done to put an end to it.

Defining poverty has remained a controversial matter; should it be considered an issue financially, or a lack of social advantages? Economically poverty is measured on a scale to determine the absolute poverty line. The calculations from these measurements, are used to determine the expenditure per dietary standards. Public opinion categorized poverty as beginning with merely $20,000 a year to a household of four; lacking the basic means to survive and determining the quality of life someone(s) have. People possess the inability to make choices, because they are unable to control most aspect of their lives. On the other hand, many have questioned that poverty can be defined in a different way. Some feel that it is not a measure of financial standing, rather, the environment and area in which you live. Is one said to be impoverished if they live in an area with a high crime rate, even if their income exceeds the poverty threshold? Should a person be forced to reside in poverty because minimum wage is not sufficient enough to match or exceed the total income meeting the poverty threshold? These vast or the topic of poverty, give great difficulty in determining it’s true meaning. Universally, the meaning changes from, country to country, based upon the different cultures. However, all the defining factors of poverty, give the negative impact on all stages of development, but most importantly; the affects on early childhood development.Many questions arise when trying to determine the root cause of poverty. Is it the fault of the impoverished people that they live as they do? Did the poor make bad choices in life at a point that led them down the path of poverty? Does some blame for poverty lie with the government? Many feel that impoverishment is mainly caused by inequality. Although, there are numerous reason for the wide spread of poverty world-wide, various reasons include: lack of responsibility, spike in health insurance, shutting down public schools & the condensing of others,

School readiness plays a critical role in early childhood development. Children who begin school behind their classmates tend to rarely catch-up. Once a student has begun to fall behind, generally they continue to fall further due to overwhelming confusion from lack of understanding. The affects alone that school have, can lead a person down a bad road at an early age. Lack of understanding can lead to self-esteem issues, being taunted/bullied, potential negative mental state, and many other complexes that lead to social complications. Studies have shown, that children growing up in low-income homes are more likely to drop-out of school. In the U.S., this in turn, leads to jobs that pay $10/hour and lower.

Life of Children in poverty. (2019, Jan 31). Retrieved from https://papersowl.com/examples/life-of-children-in-poverty/

Children of Poverty in the U.S.