Why do you Want to be a Leader ? 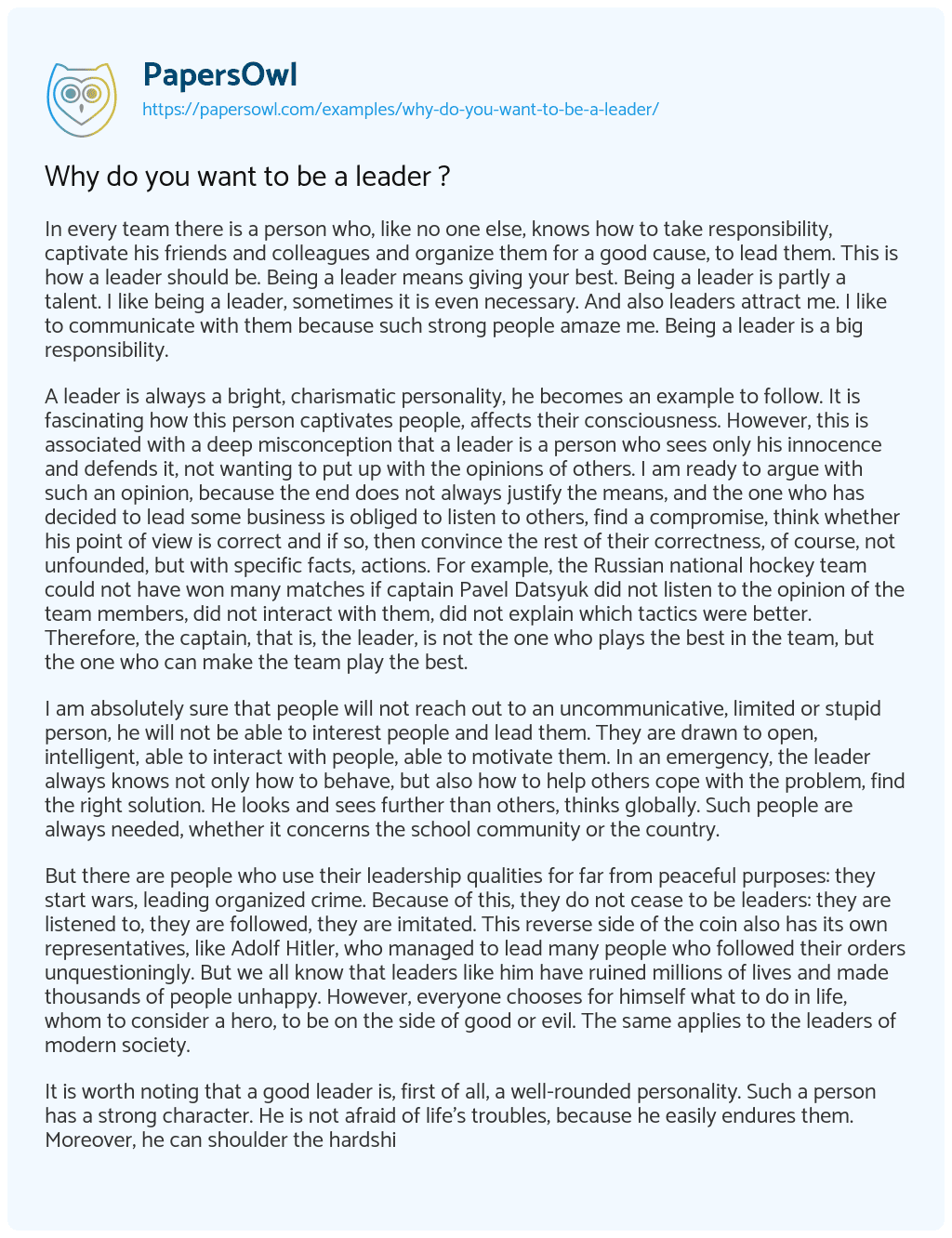 A leader is always a bright, charismatic personality, he becomes an example to follow. It is fascinating how this person captivates people, affects their consciousness. However, this is associated with a deep misconception that a leader is a person who sees only his innocence and defends it, not wanting to put up with the opinions of others. I am ready to argue with such an opinion, because the end does not always justify the means, and the one who has decided to lead some business is obliged to listen to others, find a compromise, think whether his point of view is correct and if so, then convince the rest of their correctness, of course, not unfounded, but with specific facts, actions. For example, the Russian national hockey team could not have won many matches if captain Pavel Datsyuk did not listen to the opinion of the team members, did not interact with them, did not explain which tactics were better. Therefore, the captain, that is, the leader, is not the one who plays the best in the team, but the one who can make the team play the best.

I am absolutely sure that people will not reach out to an uncommunicative, limited or stupid person, he will not be able to interest people and lead them. They are drawn to open, intelligent, able to interact with people, able to motivate them. In an emergency, the leader always knows not only how to behave, but also how to help others cope with the problem, find the right solution. He looks and sees further than others, thinks globally. Such people are always needed, whether it concerns the school community or the country.

But there are people who use their leadership qualities for far from peaceful purposes: they start wars, leading organized crime. Because of this, they do not cease to be leaders: they are listened to, they are followed, they are imitated. This reverse side of the coin also has its own representatives, like Adolf Hitler, who managed to lead many people who followed their orders unquestioningly. But we all know that leaders like him have ruined millions of lives and made thousands of people unhappy. However, everyone chooses for himself what to do in life, whom to consider a hero, to be on the side of good or evil. The same applies to the leaders of modern society.

It is worth noting that a good leader is, first of all, a well-rounded personality. Such a person has a strong character. He is not afraid of life’s troubles, because he easily endures them. Moreover, he can shoulder the hardships of those people who followed him.

For many, a leader is associated with a person who is ahead of everyone. He is followed by people who trust him. Obviously, those around him are not just blindly following him; they see in the leader such traits, thanks to which they can trust the person.

Leadership does not mean absolute independence. Yes, a leader is capable of making independent decisions, but in most cases he acts according to common sense. His actions are always rational and straightforward. The leader can act at his own risk, but only when the risk is justified. The leader always gets his way. Such amazing performance is due not to excessive aggression, but to precise goal-setting. That is why all barriers collapse before his assertiveness. The leader is ambitious – he sets himself unattainable tasks, but this does not frighten him, but only inflames him.

A good leader always has a well-coordinated team. He believes in every member and constantly teaches all his companions. The same colleagues can give their advice, and the leader will definitely listen to them. Everyone on the team, from the lowest level to the leading specialist, receives appropriate support and care. If the leader sees someone more capable than him, he will give up his command chair.

A leader is not at all an ideal person. Like all people, he also has disadvantages. But unlike many, he does not get stuck, but constantly works to eliminate them. He spends his free time on self-improvement and personal development. Because of this, the leader is always more prepared for the unexpected.

Leadership is probably the most useful trait in human character. She both inspires and calls to action. With the help of this quality, the personal potential is revealed. If you have leadership qualities, then you will have everything else.

Who is a Leader in Society?

The Leader i Want to be

Servant Leader should be an Example for his Subjects

Energy and Passion: the Main Qualities of a True Leader