Who Believe that Darwinism is the Backbone of Social Theory 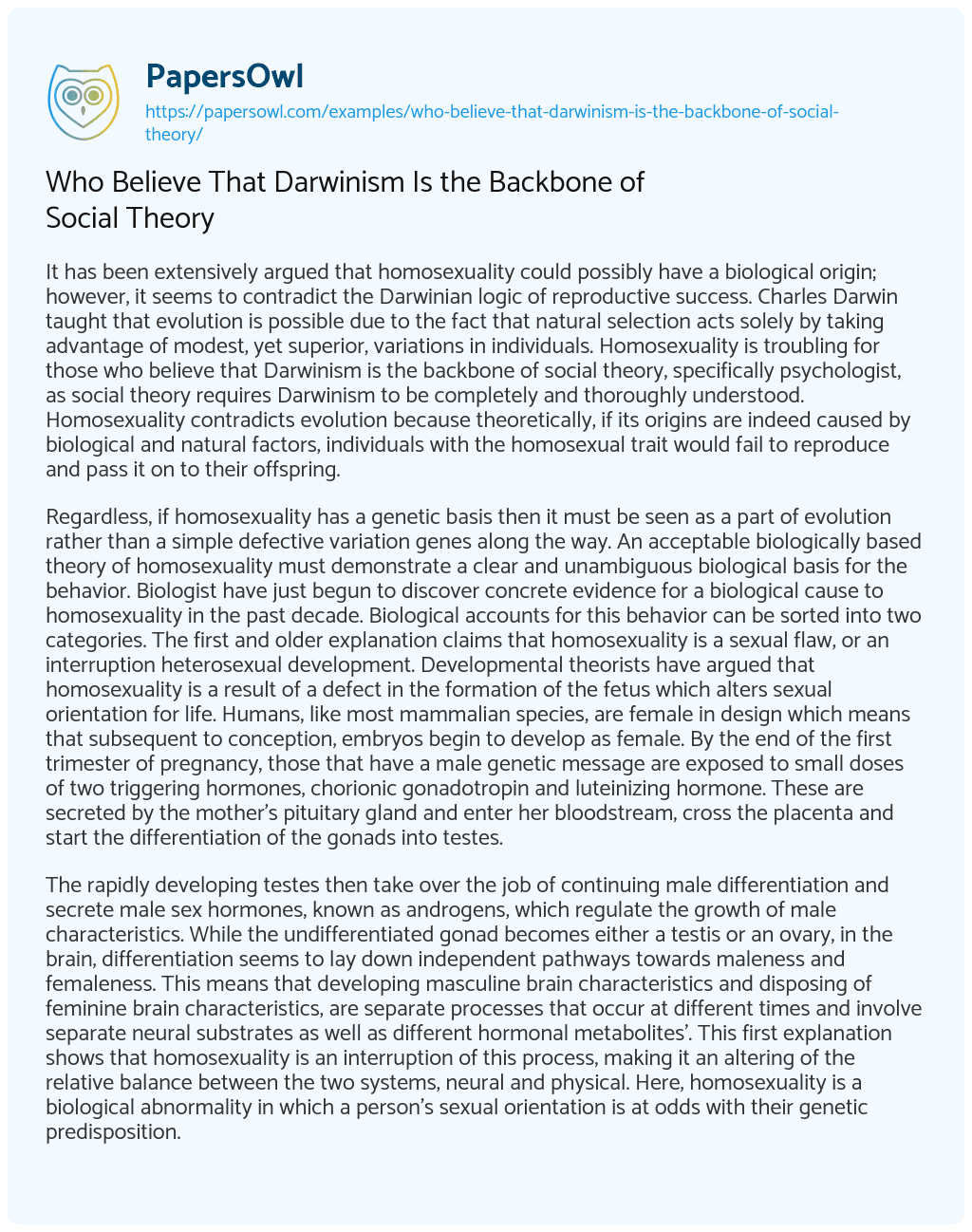 It has been extensively argued that homosexuality could possibly have a biological origin; however, it seems to contradict the Darwinian logic of reproductive success. Charles Darwin taught that evolution is possible due to the fact that natural selection acts solely by taking advantage of modest, yet superior, variations in individuals. Homosexuality is troubling for those who believe that Darwinism is the backbone of social theory, specifically psychologist, as social theory requires Darwinism to be completely and thoroughly understood. Homosexuality contradicts evolution because theoretically, if its origins are indeed caused by biological and natural factors, individuals with the homosexual trait would fail to reproduce and pass it on to their offspring.

Regardless, if homosexuality has a genetic basis then it must be seen as a part of evolution rather than a simple defective variation genes along the way. An acceptable biologically based theory of homosexuality must demonstrate a clear and unambiguous biological basis for the behavior. Biologist have just begun to discover concrete evidence for a biological cause to homosexuality in the past decade. Biological accounts for this behavior can be sorted into two categories. The first and older explanation claims that homosexuality is a sexual flaw, or an interruption heterosexual development. Developmental theorists have argued that homosexuality is a result of a defect in the formation of the fetus which alters sexual orientation for life. Humans, like most mammalian species, are female in design which means that subsequent to conception, embryos begin to develop as female. By the end of the first trimester of pregnancy, those that have a male genetic message are exposed to small doses of two triggering hormones, chorionic gonadotropin and luteinizing hormone. These are secreted by the mother’s pituitary gland and enter her bloodstream, cross the placenta and start the differentiation of the gonads into testes.

The rapidly developing testes then take over the job of continuing male differentiation and secrete male sex hormones, known as androgens, which regulate the growth of male characteristics. While the undifferentiated gonad becomes either a testis or an ovary, in the brain, differentiation seems to lay down independent pathways towards maleness and femaleness. This means that developing masculine brain characteristics and disposing of feminine brain characteristics, are separate processes that occur at different times and involve separate neural substrates as well as different hormonal metabolites’. This first explanation shows that homosexuality is an interruption of this process, making it an altering of the relative balance between the two systems, neural and physical. Here, homosexuality is a biological abnormality in which a person’s sexual orientation is at odds with their genetic predisposition.

Who Believe That Darwinism Is the Backbone of Social Theory. (2021, May 10). Retrieved from https://papersowl.com/examples/who-believe-that-darwinism-is-the-backbone-of-social-theory/

LGBTQ Rights and the Labeling Theory