What would you Bring if you were Stranded on an Island 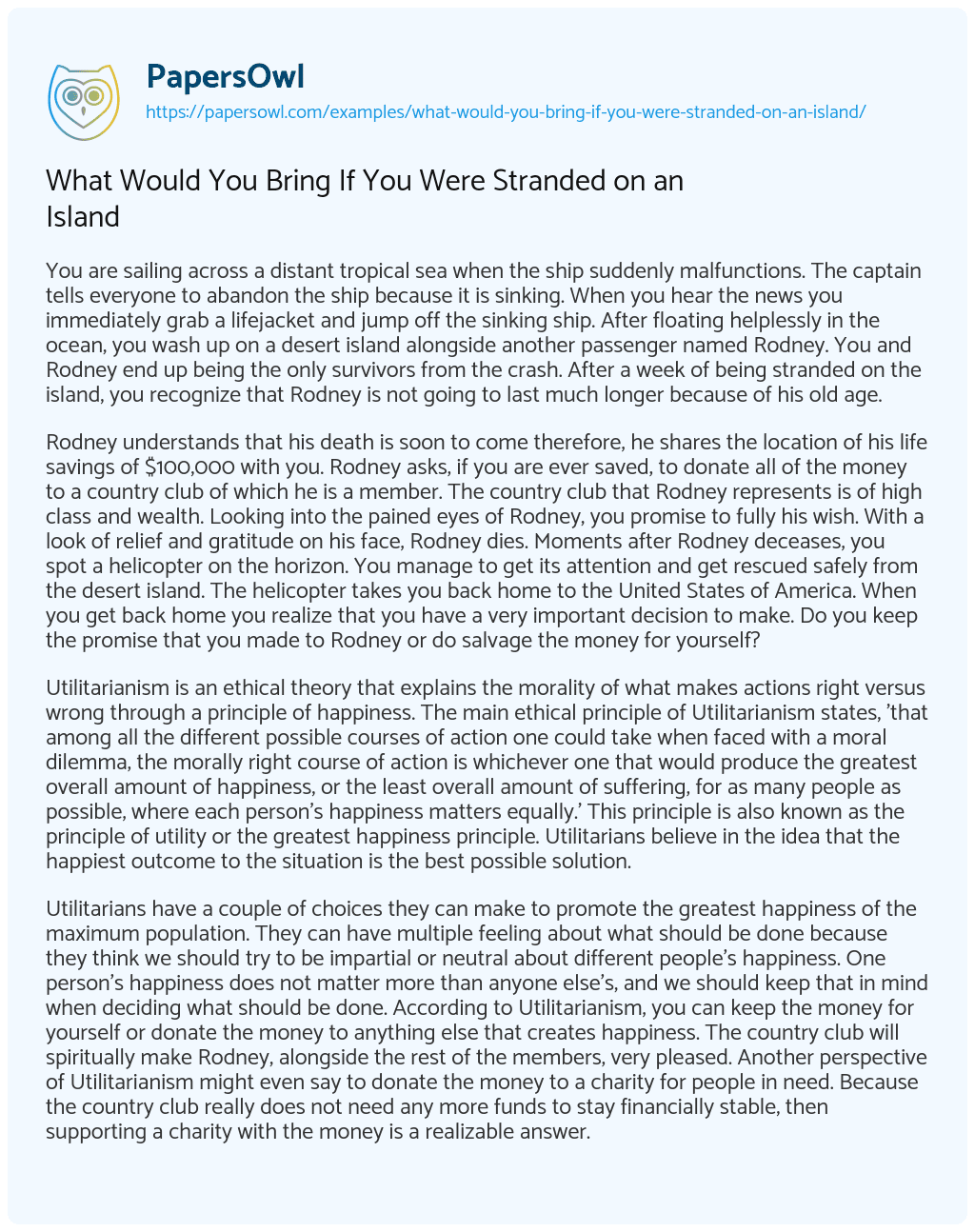 You are sailing across a distant tropical sea when the ship suddenly malfunctions. The captain tells everyone to abandon the ship because it is sinking. When you hear the news you immediately grab a lifejacket and jump off the sinking ship. After floating helplessly in the ocean, you wash up on a desert island alongside another passenger named Rodney. You and Rodney end up being the only survivors from the crash. After a week of being stranded on the island, you recognize that Rodney is not going to last much longer because of his old age.

Rodney understands that his death is soon to come therefore, he shares the location of his life savings of $100,000 with you. Rodney asks, if you are ever saved, to donate all of the money to a country club of which he is a member. The country club that Rodney represents is of high class and wealth. Looking into the pained eyes of Rodney, you promise to fully his wish. With a look of relief and gratitude on his face, Rodney dies. Moments after Rodney deceases, you spot a helicopter on the horizon. You manage to get its attention and get rescued safely from the desert island. The helicopter takes you back home to the United States of America. When you get back home you realize that you have a very important decision to make. Do you keep the promise that you made to Rodney or do salvage the money for yourself?

Utilitarianism is an ethical theory that explains the morality of what makes actions right versus wrong through a principle of happiness. The main ethical principle of Utilitarianism states, ‘that among all the different possible courses of action one could take when faced with a moral dilemma, the morally right course of action is whichever one that would produce the greatest overall amount of happiness, or the least overall amount of suffering, for as many people as possible, where each person’s happiness matters equally.’ This principle is also known as the principle of utility or the greatest happiness principle. Utilitarians believe in the idea that the happiest outcome to the situation is the best possible solution.

Utilitarians have a couple of choices they can make to promote the greatest happiness of the maximum population. They can have multiple feeling about what should be done because they think we should try to be impartial or neutral about different people’s happiness. One person’s happiness does not matter more than anyone else’s, and we should keep that in mind when deciding what should be done. According to Utilitarianism, you can keep the money for yourself or donate the money to anything else that creates happiness. The country club will spiritually make Rodney, alongside the rest of the members, very pleased. Another perspective of Utilitarianism might even say to donate the money to a charity for people in need. Because the country club really does not need any more funds to stay financially stable, then supporting a charity with the money is a realizable answer.

The Kantian theory explains that the intention of the one acting determines whether one is acting morally or not. Kant’s main ethical principle is known as the Categorical Imperative. This principle declares that you, ‘Act in such a way that you treat humanity, whether in your own person or in any other person, always at the same time as ‘an end’, never ‘merely as a means.” Therefore, if the person’s objective is not in accordance with the Categorical Imperative, then the action is considered to be morally incorrect. Using someone ‘merely as a means’ is to use a person as an object or tool for your own personal advancement. Kantians believe that we should never use people as ‘merely as a means’ but instead as ‘an end.’ Using someone as ‘an end’ is to treat everyone with respect, absolute value, and inherent dignity. According to Kant, you should keep the promise you made to Rodney and donate his money to the country club. You should do this because it personifies the way that Kantians treat people. Respect and consent are the two requirements that Kantians must meet in order to treat someone as ‘an end’ or never ‘merely as a means.’ Consent is when each person involved in the situation understands and agrees to what is being done. Respect is when everyone is treated the right way with fairness. Kantians also think we have an obligation to help people fulfill their plans and goals in life. Consequently, Kantians would satisfy Rodney’s dreams of donating $100,000 to his country club. We should never be selective about treating people as mere means.

Originally, I believed that the right thing to do in this situation was to donate Rodney’s money to the country club. It is not my money, therefore, I should commit to the promise I made. Although, the right thing to do might not always transpire in the spur of the moment. If I was thrown into this situation, I might initially think I have to donate the money. However, once I lay my eyes on that money, I will most likely keep it for myself. Most people can agree that money will make you happy. I would feel obligated to take the $100,000 when I see it sitting there. I would recognize that the country club does not need the money because of its current financial success. Instead, I would use the money to help take care of certain necessaries in my life. For example, I can use the money to pay for my college education. I believe that you should perform the action that produces the most overall happiness for all the people involved in the situation. Since I am potentially now the only one in the situation, the utilitarian theory would justify that I should do whatever is best for myself. The country club does not need to know about the money because they can and will continue to survive without it. Keeping the money to myself is the best solution to the desert island promise.

The desert island promise focuses you to make a decision based on your own ethically beliefs. This scenario helps prove the wrongfulness or the rightfulness of your decision. The two theories that came into play here were Utilitarianism and Kantian’s theory. Utilitarianism is the theory where you make a decision based on your level of happiness. Whereas, Kantians trust the idea of treating people ‘an end’ and never ‘merely as a means.’ I believe that keeping the money to myself and not giving it away to Rodney’s country club is the best solution to the desert island promise.

What Would You Bring If You Were Stranded on an Island. (2021, Mar 24). Retrieved from https://papersowl.com/examples/what-would-you-bring-if-you-were-stranded-on-an-island/

How being Successful Can Bring Happiness