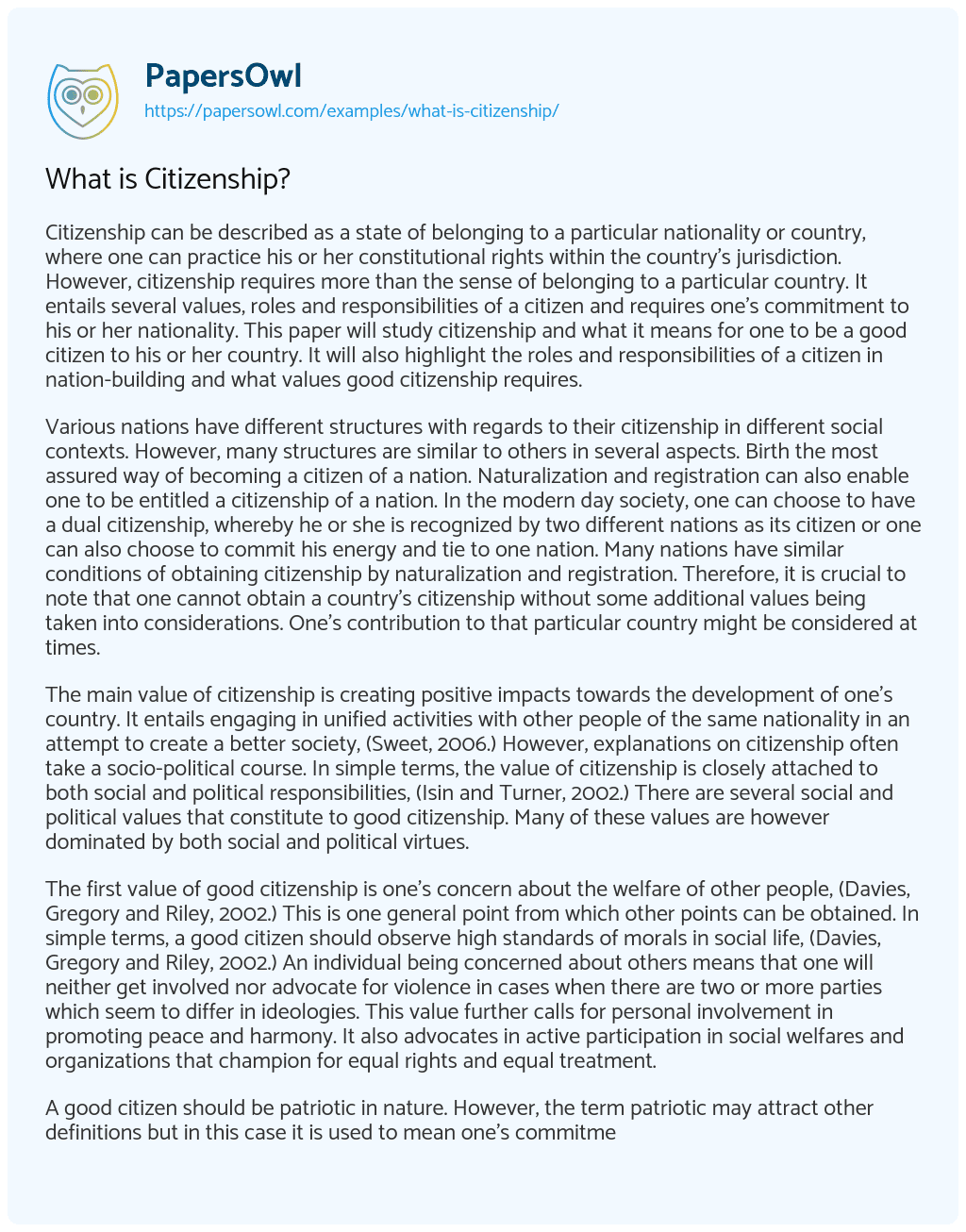 Citizenship can be described as a state of belonging to a particular nationality or country, where one can practice his or her constitutional rights within the country’s jurisdiction. However, citizenship requires more than the sense of belonging to a particular country. It entails several values, roles and responsibilities of a citizen and requires one’s commitment to his or her nationality. This paper will study citizenship and what it means for one to be a good citizen to his or her country. It will also highlight the roles and responsibilities of a citizen in nation-building and what values good citizenship requires.

Various nations have different structures with regards to their citizenship in different social contexts. However, many structures are similar to others in several aspects. Birth the most assured way of becoming a citizen of a nation. Naturalization and registration can also enable one to be entitled a citizenship of a nation. In the modern day society, one can choose to have a dual citizenship, whereby he or she is recognized by two different nations as its citizen or one can also choose to commit his energy and tie to one nation. Many nations have similar conditions of obtaining citizenship by naturalization and registration. Therefore, it is crucial to note that one cannot obtain a country’s citizenship without some additional values being taken into considerations. One’s contribution to that particular country might be considered at times.

The first value of good citizenship is one’s concern about the welfare of other people, (Davies, Gregory and Riley, 2002.) This is one general point from which other points can be obtained. In simple terms, a good citizen should observe high standards of morals in social life, (Davies, Gregory and Riley, 2002.) An individual being concerned about others means that one will neither get involved nor advocate for violence in cases when there are two or more parties which seem to differ in ideologies. This value further calls for personal involvement in promoting peace and harmony. It also advocates in active participation in social welfares and organizations that champion for equal rights and equal treatment.

A good citizen should be patriotic in nature. However, the term patriotic may attract other definitions but in this case it is used to mean one’s commitment towards in serving his country. Patriotism is a crucial element of good citizenship, (Davies, Gregory and Riley, 2002.) In many cases, patriotism has been explained as the willingness of one to give up all, including his or her life for the sake of his or her country. However, many logical arguments are not often considered in this case. Instead of one being willing to die for his or her country, it could be prudent if patriotism could be seen as the willingness of one to live in order to offer his or her unlimited contribution in nation building. Some citizens often commit large-scale assaults on foreign nations and see their acts as patriotic acts due to this misconception.

The purpose of citizenship in a society varies from different social contexts, (Isin and Turner, 2002.) According to Isin and Turner, (2002), citizenship creates a sense of solidarity in the society. It enables the society to come up with a common goal and work in a unified way towards its realization. In simple terms, it helps the society to have a central focus or a common goal. Secondly, citizenship is important in the society as it gives an individual a sense of belonging. In this way, an individual is capable of feeling secure and accomplished as opposed to the feeling of stateless persons, who do not officially belong to a country and have no one to present their grievances to.

The world is slowly turning into a small village with several events unfolding in the world of technology. The world is no longer a vast spherical ball where movement from the East to the West could take long periods of time. This calls for a world citizenship plan, where all people can work in unity towards achieving common goals. This can be ensured by establishing a sovereign force that can effectively execute this plan, (Sweet, 2006.) It is hard to imagine what will be the impact of a united people committed to a common course of making the world a better place for anyone. Many environmental-friendly achievements can be made if the global population unifies its focus to this matter. However, that is almost impossible in the current setting where several groups have all established their own focus. A global unified focus can only be achieved by global citizenship and therefore, global governments should come up with a unified structure on World citizenship in order to create a better world for the quickly upcoming generations.

In conclusion, citizenship is an aspect that entails a variety of values, roles and responsibilities that are meant to hasten the economic growth of the nation. Its unifying nature should be taken advantage of and establish global citizenship in order to unite the world, considering the fact that many attempts have been made. Global citizenship can be helpful in eradicating major environmental problems by establishing a central focus in dealing with these issues. It will also be helpful in unity the global population and hence create a unity of purpose that can help a lot in pursuing issues of concern.

What is Citizenship?. (2019, Mar 04). Retrieved from https://papersowl.com/examples/what-is-citizenship/

The Meaning of Citizenship

Non Citizenship Voting in the US