What Freedom Means to me 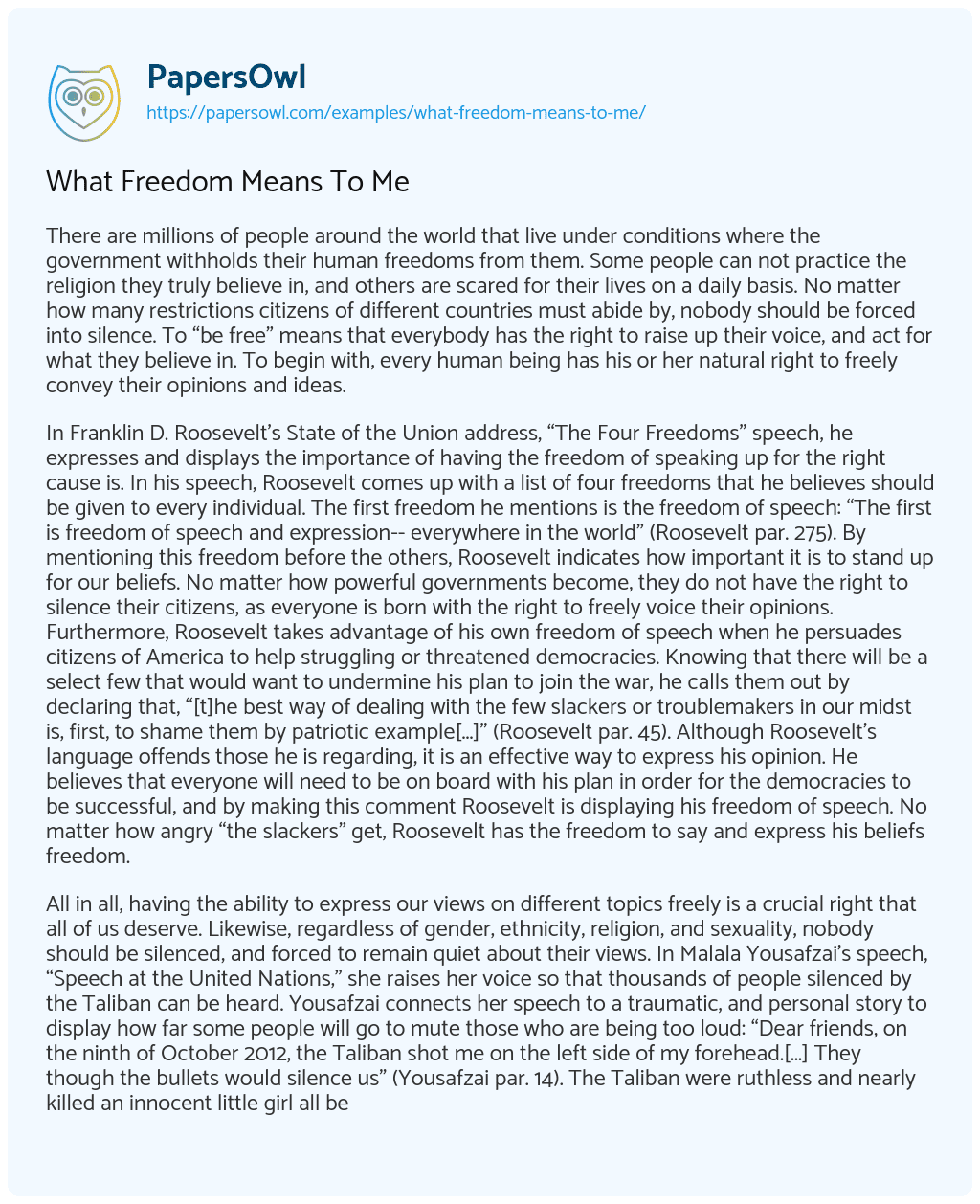 There are millions of people around the world that live under conditions where the government withholds their human freedoms from them. Some people can not practice the religion they truly believe in, and others are scared for their lives on a daily basis. No matter how many restrictions citizens of different countries must abide by, nobody should be forced into silence. To “be free” means that everybody has the right to raise up their voice, and act for what they believe in. To begin with, every human being has his or her natural right to freely convey their opinions and ideas.

In Franklin D. Roosevelt’s State of the Union address, “The Four Freedoms” speech, he expresses and displays the importance of having the freedom of speaking up for the right cause is. In his speech, Roosevelt comes up with a list of four freedoms that he believes should be given to every individual. The first freedom he mentions is the freedom of speech: “The first is freedom of speech and expression– everywhere in the world” (Roosevelt par. 275). By mentioning this freedom before the others, Roosevelt indicates how important it is to stand up for our beliefs. No matter how powerful governments become, they do not have the right to silence their citizens, as everyone is born with the right to freely voice their opinions. Furthermore, Roosevelt takes advantage of his own freedom of speech when he persuades citizens of America to help struggling or threatened democracies. Knowing that there will be a select few that would want to undermine his plan to join the war, he calls them out by declaring that, “[t]he best way of dealing with the few slackers or troublemakers in our midst is, first, to shame them by patriotic example[…]” (Roosevelt par. 45). Although Roosevelt’s language offends those he is regarding, it is an effective way to express his opinion. He believes that everyone will need to be on board with his plan in order for the democracies to be successful, and by making this comment Roosevelt is displaying his freedom of speech. No matter how angry “the slackers” get, Roosevelt has the freedom to say and express his beliefs freedom.

All in all, having the ability to express our views on different topics freely is a crucial right that all of us deserve. Likewise, regardless of gender, ethnicity, religion, and sexuality, nobody should be silenced, and forced to remain quiet about their views. In Malala Yousafzai’s speech, “Speech at the United Nations,” she raises her voice so that thousands of people silenced by the Taliban can be heard. Yousafzai connects her speech to a traumatic, and personal story to display how far some people will go to mute those who are being too loud: “Dear friends, on the ninth of October 2012, the Taliban shot me on the left side of my forehead.[…] They though the bullets would silence us” (Yousafzai par. 14). The Taliban were ruthless and nearly killed an innocent little girl all because she was using her voice to speak up for her education. All she wanted was to go to school, but the Taliban had other plans in mind for her, and they did everything in their power to muffle her voice as best they could. Her goal here is to show that nobody can be silenced, as the freedom of speech is something everyone has the right to. With this in mind, Yousafzai continued to raise her voice for others that could not speak for themselves: “We call upon all governments to fight against terrorism and violence; to protect children from brutality and harm” (Yousafzai par. 26). What the Taliban did to make her weaker, only made Yousafzai stronger. The incident helped her find her voice that was louder than ever, and Yousafzai used that to her advantage. Once she found her voice, she did not let it go to waste, instead used it to make a difference for those who are in need of help. In the end, although others do everything in their power to keep is quiet, as long as we do not lose sight of our goal, we can never be silenced. Lastly, everyone around the world should be able to act upon their beliefs freely, as long as they are not negatively affecting others in the process.

Kurt Vonnegut’s short story, “Harrison Bergeron,” depicts a society where the government forces everyone to be equal, and nobody has the freedom of speech. In order to make sure that nobody is better than one another, the government forces those who are above average to wear handicaps. When Harrison Bergeron, a fourteen-year-old prisoner accused of plotting against the government, breaks out of jail, all he wants to do is use his platform to give rights back to the citizens: “Harrison tore the straps of his handicap harness like wet tissue paper, tore straps guaranteed to support five thousand pounds” (Vonnegut par. 56). The handicaps that Harrison was wearing before tearing them off, was a way for the government to restrict his thoughts. Harrison remains peaceful while standing up for his beliefs, and does not harm anybody else in the process. He is not doing anything wrong, as he is simply exercising his natural-born right to express his opinions freely. However, things quickly change for the better as the Handicap General enters the room with a gun, and both Harrison and his fiance “[..] were dead before they hit the floor” (Vonnegut par. 79). Harrison and his future wife did not deserve to die, for all they did was to express their opinions by peacefully acting out against the rules. They were not being violent towards anyone, and no matter how bad the government wants to keep everything under control, nobody should lose their life for standing up for their beliefs. All things considered, regardless of the circumstances, everybody should have the right to act based on their opinions, without government interference, as long as they are doing so peacefully. In short, to “be free” means that all of us have a right to freely speak up and act according to our beliefs. These rights are not exclusive to a certain group of people, everyone is born with the freedom of speech. Some may think that their lives are amazing, but it all means nothing if they are restricted from expressing their ideas.

What Freedom Means To Me. (2021, Jul 06). Retrieved from https://papersowl.com/examples/what-freedom-means-to-me/

Importance of Freedom of Speech